The race is on for two start-up airlines in the US market, which are looking to adopt an Allegiant-like network structure by targeting underserved markets that are not attractive to larger US airlines. And both of those aspiring operators have recently been more vocal about their plans to launch this year.

Led by David Neeleman, the start-up Breeze aims to serve what it deems as neglected markets in the US, and Houston Air Holdings, led by former Allegiant executive and United CFO Andrew Levy, also aims to target underserved markets. Mr Levy’s company has the benefit of having an aircraft operator's certificate (AOC) – something Breeze is working to acquire.

There is no lack of interest in each entity, and both companies seem firmly entrenched in their belief that there are multiple untapped opportunities in the mature US market.

For a little more than a year both Breeze and Houston Air Holdings have been working on plans to launch in the US market.

Andrew Levy purchased XTRA Airways and in 2019 some details of the airline’s business plan emerged, including XTRA’s plans to raise USD100 million and operate as an ultra low cost airline, launching its services with five aircraft. At that time, XTRA was aiming to operate 45 aircraft by 2023.

More recently, Bloomberg has reported that Mr Levy has raised USD125 million for Houston Air Holdings, which is the working name for his venture.

The publication stated that the airline would offer nonstop flights from secondary airports to midsize and large markets, which is the strategy adopted by Allegiant Air. Bloomberg also stated that Houston Air Holdings is preparing to take delivery of a Boeing 737-800 from the lessor GECAS, configured with 189 seats.

One of the more interesting quotes from Mr Levy’s interview with Bloomberg was an insight into Houston Air Holdings’ targeted passenger base, which is a “small, small niche” of air travellers who are price sensitive and eager to avoid large, congested airports. He also added that a small niche in the US market could be a large opportunity.

It is not yet certain what markets Mr Levy’s airline will serve, and whether the ULCC model is still part of the company’s business plan. But given his tenure with Allegiant, which included serving as the airline’s president, there is little doubt that the yet-to-be named airline will target a cost structure similar to those of ULCCs.

David Neeleman’s planned venture Breeze is aiming to launch with the smaller 28 Embraer 195s leased from Azul. Mr Neeleman is the founder and Chairman of the Brazilian airline, and Breeze has stated that those aircraft are well suited for operating in lower utilisation, shorter haul, markets. More significantly, Breeze is scheduled to start taking delivery of 60 Airbus A220-300s in 2021.

Although Houston Air Holdings has not offered any insight into its long term fleet plans, it is likely that the company will stick to a single fleet type, and Breeze believes it can use the A220 in longer haul markets with scant competition.

In its application for an AOC, Breeze explained that it plans to bring low cost, nonstop service to midsized markets “abandoned by our current air transportation network”. Breeze's view is that as major airlines have consolidated at fortress hubs, “entire segments of the country have seen their air travel options diminish”, which has led to increased connections and increased travel times.

Breeze offered numerous examples of regions in the US where seat capacity dropped for the period spanning 2007 to 2017, including some markets that have been hit with decreases as large as 15%. 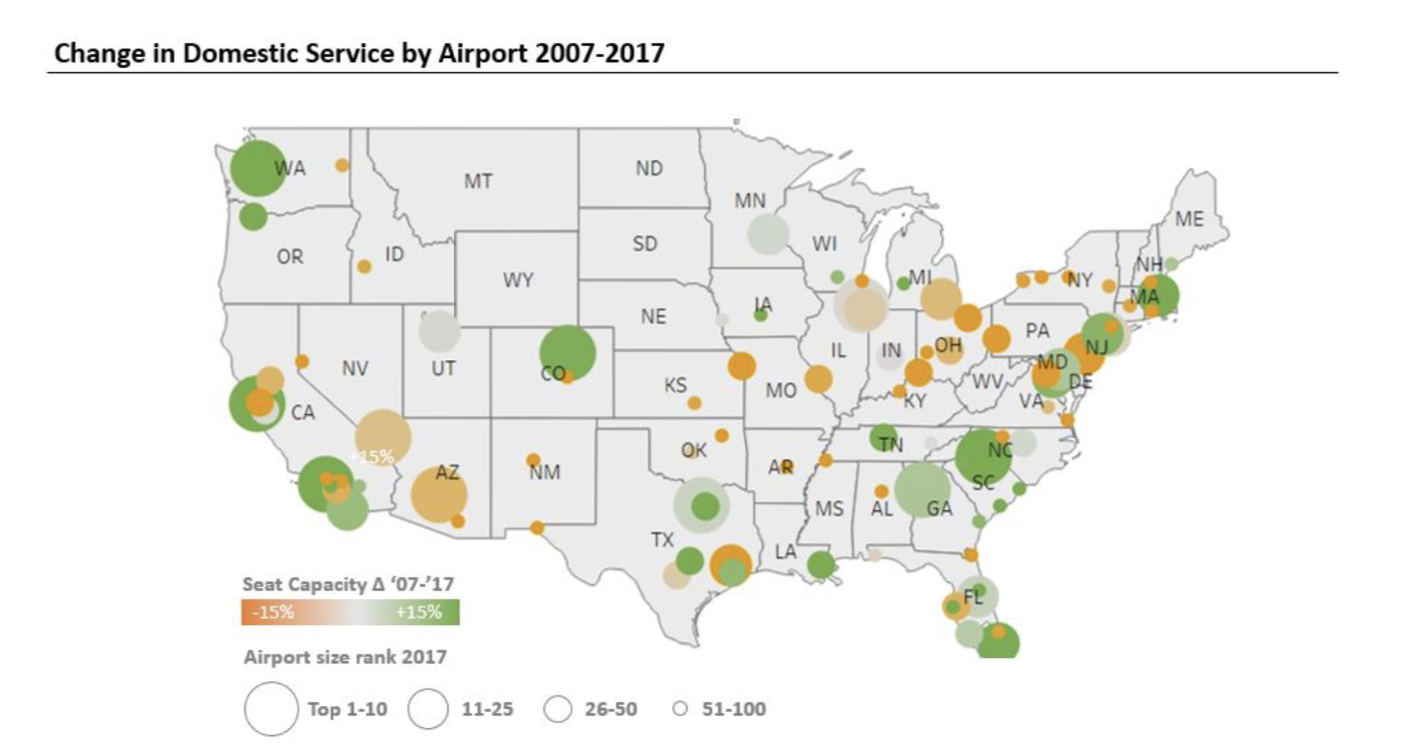 The company told the US DoT that initially its network would encompass underserved city pairs east of the Mississippi River “and primarily north-south”.

Breeze noted that many of those destinations are secondary leisure markets that have favourable costs for value conscious travellers or second homeowners. A byproduct of the rise of LCCs Ryanair and EasyJet in Europe has been an ability for consumers to purchase second homes, since airfares in markets where those homes are located are so reasonable.

Mr Neeleman recently told Airways News that he has a home in Arizona, and “my next-door neighbor there has a couple of million-dollar houses. He comes from Wisconsin 12 times a year via Allegiant and he won’t fly with anyone else besides Allegiant, because it’s so convenient and works perfectly for him”.

It is not clear whether that is the niche market that Houston Air Holdings is targeting with the larger 737-800s, but under discussion here are two veteran airline executives who believe that there are certain segments in the US that are being left behind, and those individuals are working to put their theories about untapped opportunities in the market to the test.

Two airline veterans attempt to leverage niche opportunities in the US

Obviously the big question is whether the US market can support two ambitious and (presumably well funded) start-ups looking, essentially, to enter markets where service levels are either non-existent or consumers are severely underserved.

It has been some time since a US start-up has made the transition to a stable operator – arguably JetBlue (founded by Mr Neeleman) was the last start-up to remain viable. JetBlue just celebrated its 20th anniversary and entered the market at a time when the major US carriers were not as strong as they are today, taking a dominant position at new York's JFK in the wake of 9-11.

Whatever the odds for Breeze and Houston Airways Holdings' survival may be, those entities are continuing their plan to use Allegiant’s network structure as a baseline to inject some new thinking into the US marketplace.