It has been quite some time since a US start-up airline has successfully achieved longevity. But two aspiring operators are hoping to reverse that trend in a marketplace were consolidation has created a select few airlines with high levels of market concentration.

Those potential new entrants – Moxy and XTRA – are led by high profile industry veterans, who believe there are inherent opportunities to build a network around secondary markets in the US as a result of consolidation in the market.

There is little doubt that the US could use some fresh competition in its aviation sector. But those new competitors face rivals that are arguably far more formidable than they were in the past. And it remains far from certain that Moxy and XTRA can build defensible networks for the long haul.

Consolidation in the US marketplace over the course of the past 15 years has resulted in three large global network airlines, Southwest, the hybrids Alaska and JetBlue, and the ULCCs Spirit and Frontier.

The four largest airlines represent 76% of US domestic ASKs and combined, Alaska and JetBlue account for 12.5%.

United States domestic ASKs, by airline, as of mid-Apr-2019 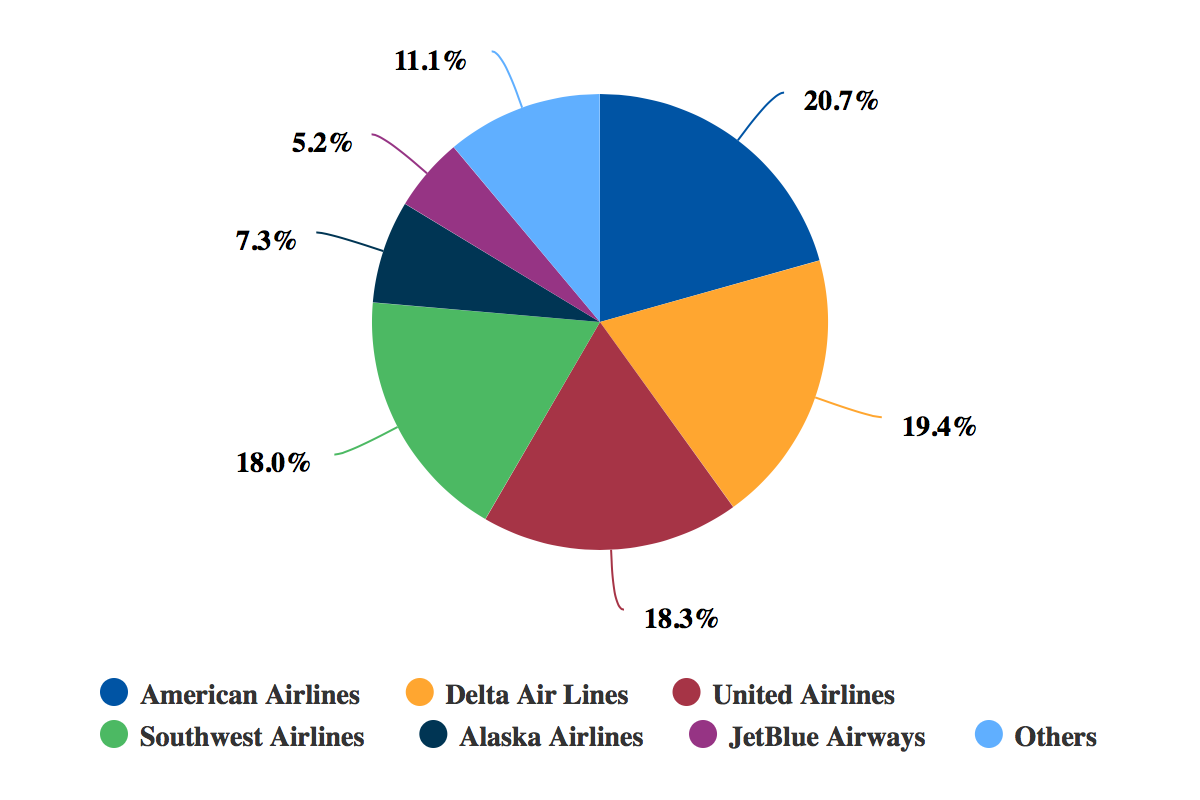 JetBlue made its debut in 2000, which was before the latest round of consolidation that began in 2005 with the combination of US Airways and America West.

JetBlue was arguably one of the most successful US start-ups in the country’s aviation history and the company took its own stab at consolidation in 2016 when it competed with Alaska to acquire Virgin America. Alaska ended up with the winning bid, and is in the process of working to optimise the combined networks of the two airlines.

The concentration of domestic US capacity has resulted in most of that supply becoming centralised in large hubs, with former hubs in Pittsburgh, Memphis, Cincinnati and Cleveland being forced to reinvent themselves.

Low cost and ultra low cost operators have helped those former hubs to adapt to the consolidated market. For example, Spirit and Frontier represent approximately 30.8% of Cleveland’s domestic ASKs. 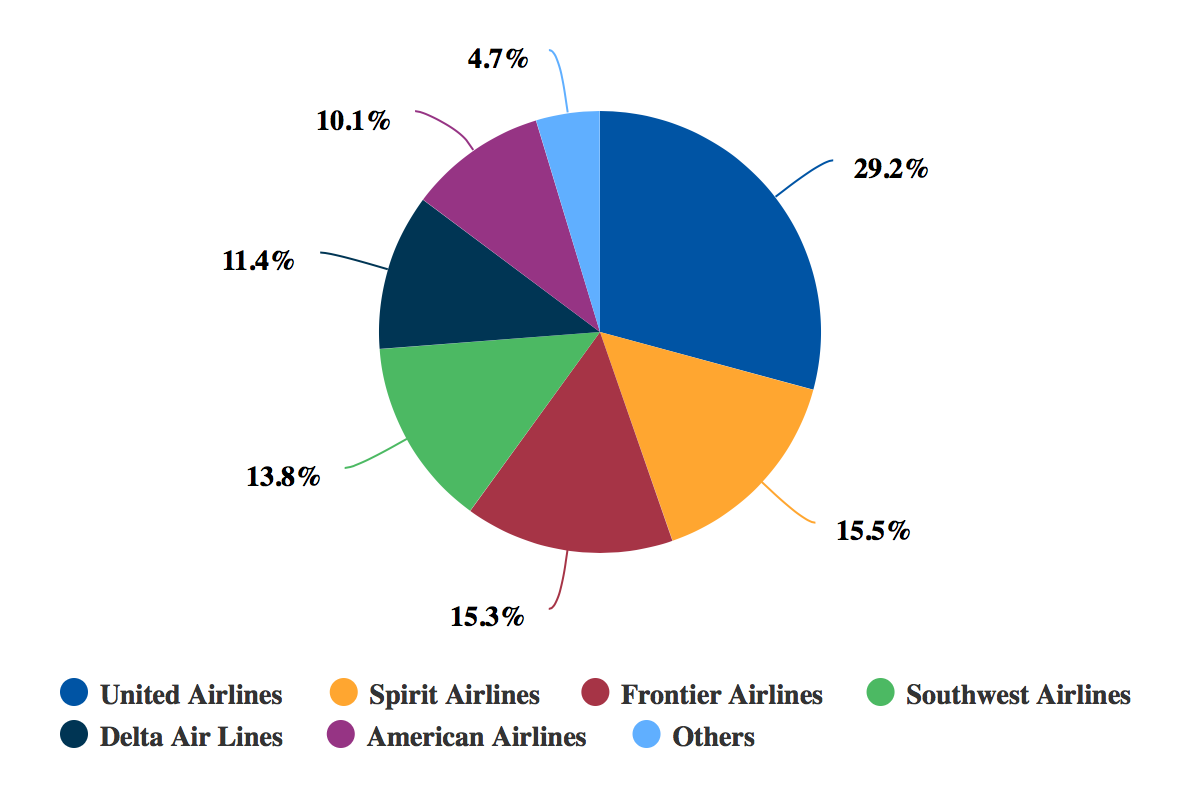 Growth at US ULCCs Spirit and Frontier continues unabated

The ULCCs Spirit and Frontier both operate to a mix of larger markets, including the hubs of major airlines, and to medium and small markets as well. Combined, those two airlines have 224 aircraft on order – 180 aircraft for Frontier and 44 in Spirit’s order book. Spirit has indicated that it is planning to place an aircraft order this year, and the airline has previously made comments about potentially adding a second fleet type.

Frontier’s order book, as well as Spirit’s continued (albeit lower) double digit capacity growth for 2019, show that those airlines are working to reach a certain level of scale in the US market.

Executives from Indigo Partners, which previously owned Spirit and presently owns Frontier, have stated that US ULCCs could reach a 20% market share, noting that 42% of pan-European travel occurs on ultra low cost and low cost airlines.

As Spirit and Frontier work to realise their market share ambitions, other start-up airlines are waiting in the wings to capitalise on opportunities in the US market.

In 2018 the founder of JetBlue and Azul David Neeleman announced his return to the US market through a start-up with the working title Moxy, and the company subsequently placed an order for 60 Airbus A220 narrowbody aircraft. The airline has a targeted launch date of 2021.

Moxy’s business plan rests on operating from secondary airports, with Meacham in Fort Worth, Gary, Indiana, and Burbank, California specifically mentioned in the press.

The airline’s product proposition appears to include medium frills with comfortable leg room, WiFi, and a limit on the add-on fees charged to passengers.

More recently, another aspiring ULCC has emerged in the US marketplace. Former Allegiant president and United CFO Andrew Levy is now CEO of XTRA Airways, a charter airline he aims to transition into a ULCC with a targeted 2020 launch.

XTRA’s plans first emerged in a report on WBUR (Boston's NPR news station), which obtained a copy of a document of the business plan prepared for potential investors.

The airline’s name will likely change and Mr Levy aims to operate the new airline (which can launch using XTRA’s existing operator's certificate) under the ULCC model. XTRA also plans to operate from secondary airports.

WBUR also reported that XTRA was aiming to raise USD100 million and launch services with five aircraft. Its current fleet projections show an operating fleet of 45 aircraft in 2023. Mr Levy told WBUR that the airline would operate “new or near new aircraft”, and XTRA currently operates Boeing 737s.

Confronting the ULCC model head on

In its investor document XTRA said that US ULCCs are unreliable and rely too heavily on primary airports.

Frontier and Spirit have historically run more unreliable operations, but Spirit has posted marked improvements in its operational metrics during the past couple of years. In Oct-2018 the airline was the most reliable in US DoT reporting and, at that point, it was ranked in the top four airlines measured by on-time arrivals.

Both Spirit and Frontier rely on primary airports to a certain degree. Frontier’s largest base is at United’s Denver hub, and some of Spirit’s top domestic airports by ASK deployment include Detroit, Chicago, Los Angeles and Dallas/Fort Worth.

During the past year Spirit has made a big international push from Orlando International to markets in the Caribbean and has also opted to enter one of American’s most profitable hubs in Charlotte, becoming the first low cost or ULCC to challenge American’s dominance in the market.

But both Frontier and Spirit also count non-hub airports among their top domestic bases measured by ASK deployment, including Fort Myers, Tampa and Orlando, and there is little doubt that eventually Moxy and XTRA will have to consider those types of busier, non-hub airports that cater to leisure travellers.

Incumbents' response to the new aspiring US airlines

Both XTRA and Moxy, while operating under different business models, appear to be targeting markets that they believe will shield them from competition from the large US mega carriers. But even as that seems like a logical strategy to pursue, the bigger airlines will be watching their network moves; armed with their fare families they could selectively price match in secondary markets where the catchment area is large enough for the titans to compete.

But Mr Levy believes there is a lot of room for more seats in the US market, according to WBUR, and the publication stated that XTRA’s investor document had said that US airlines were operating fuller flights with higher fares. 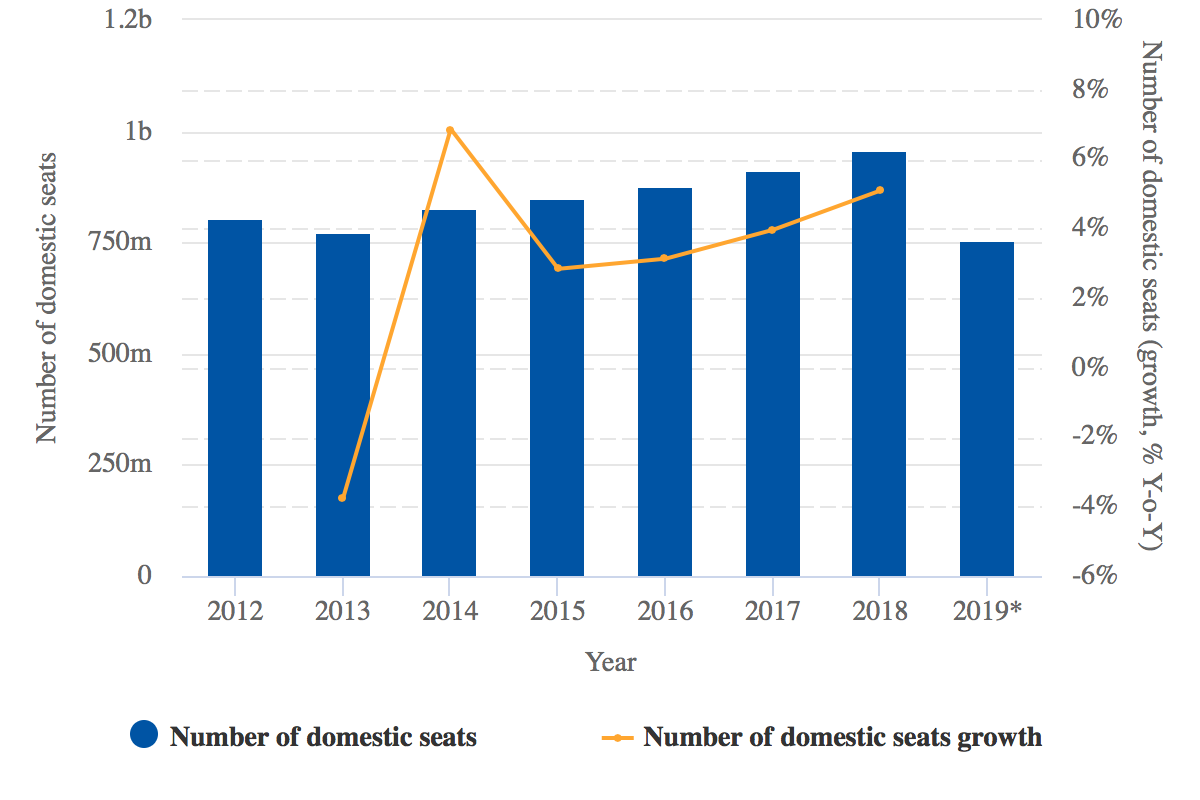 *The values for this year are at least partly predictive up to 6 months from 15-Apr-2019 and may be subject to change.

With the level of power that a handful of airlines now hold in the US, it inevitable that aspiring start-ups would crop up to fill a network gap created by the consolidation that produced that market concentration.

The two high profile potential start-ups that are targeting a launch in the US market during the next couple of years are the result of assessment and study of the evolving US market by two executives who arguably have an innate understanding of the dynamics in the US, and more importantly, they are individuals who have sufficient influence to draw attention from potential investors.

Mr Neeleman has a very strong track record of successfully exploiting gaps in a market (both in airlines and elsewhere) and Mr Levy's experience in the contrarian Allegiant model must demand respect too.

It is not just the dominant large players who will be watching (and reacting) closely. Indigo Partners' Bill Franke has also staked a claim to the lower priced expansion market. The usually highly stable US domestic market appears headed for an interesting two years as these plans unfold.