US shutdown: headwinds for aviation and aerospace

The partial government shutdown in the US is creating havoc across many industries, from the financial sector right through to small businesses operating near the country’s National Parks.

The aviation industry is also facing pressure from the shutdown on numerous fronts – ranging from the high profile “blue flu” sick-ins from TSA workers to FAA safety inspectors suspending their oversight functions.

Anecdotes from airlines are already emerging, including uncertainty in achieving ETOPS certification and delays in putting aircraft into service.

The overall effects of the shutdown on the airline business are tough to predict, but the economic effects of a prolonged partial closure of the government will no doubt trickle down to many facets of the US’ aviation and aerospace industries.

TSA employees are ordered to work without pay; 'sick-outs' rising

The US government entered the third week of a partial government shutdown in the week of 7-Jan-2019, with approximately 800,000 workers affected by the closures.

It was the period when a large proportion of those workers would miss their first pay cheques, and there seemed to be no end in sight to resolve the stalemate between legislators and the administration of President Trump over funding for construction of a wall on the US-Mexico border.

Transport Security Administration (TSA) officers and staff were deemed essential and were notified to keep reporting for work without receiving pay. As the period for the first missed pay cheque drew near, there were numerous reports of TSA screeners calling in sick. The sick-outs appeared to spur longer wait times for screening at New York LaGuardia airport and the challenge of ensuring ample TSA staffing at airports will only grow as the shutdown continues.

American and Southwest cite some issues surfacing from the shutdown

FAA inspectors are also part of the workforce furloughed during the shutdown. The agency’s inspectors fall under the nonessential employee category, and their inability to work results in a stoppage in inspecting plane repairs and pilot training programmes.

Some airlines have already offered insights into the immediate effects of the shutdown.

The Dallas Morning News reported that American Airlines had said it would be unable to put two recently delivered aircraft into service while awaiting FAA approvals. CAPA’s fleet database shows that American and Delta are projected to accept the lion’s share of aircraft deliveries during 2019, with nearly 180 aircraft scheduled for delivery.

United States of America deliveries, by airline, for 2019 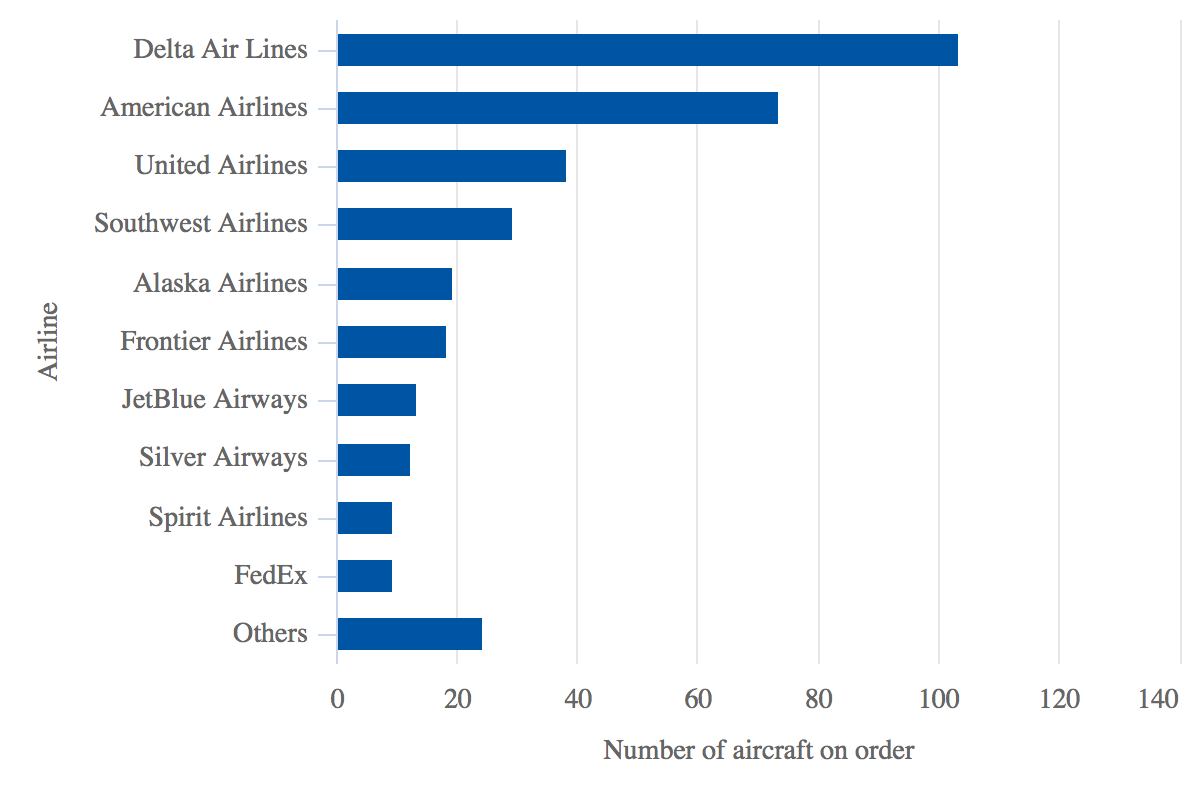 The publication stated that Southwest could face delays in launching its highly anticipated service to Hawaii. The company is in the midst of working to gain approval for Extended-range Twin-engine Operational Performance Standards (ETOPs), which allows for extended operations over water.

Citing an internal staff memo from Southwest CEO Gary Kelly, the publication stated that Mr Kelly had told employees that while Southwest was close to its goal of attaining ETOPs certification, the shutdown was one factor beyond its control.

Instead of making huge additions to its Latin America and Caribbean network in 2019, Southwest has had its major focus on adding service to Hawaii. Passengers are waiting for a detailed schedule of Southwest’s Hawaiian operations, and delays in a launch will allow its competitors on its new Hawaii routes some breathing room from additional competitive capacity pressure.

According to the USA Today, approximately 10,000 US air traffic controllers have been told to report to work without pay and the union representing controllers – the National Air Traffic Controllers Association (NATCA) – stated that the FAA had closed its controller training academy in Oklahoma City. Additionally, classroom and simulator training has also been suspended during the shutdown.

The union also warned that the closure of the controller training academy could complicate plans to add more than 1,400 controllers to the workforce in fiscal 2019, since training courses could be delayed.

NATCA warned that if staffing shortages worsened, capacity in the US National Airspace System would be reduced, which could lead to flight delays.

With no end in sight, there is growing concern about the effects of the shutdown on the US economy as the stock market remains volatile, and trade disputes continue to create economic anxiety.

Before the shutdown, a growing number of economists were warning of a potential economic slowdown this year before a full-blown recession occurring in 2020.

The shutdown will have knock-on effects for consumer confidence because workers that are not receiving pay cheques will curb their spending, possibly intensifying an already slowing economy.

For now, most US airlines have a solid outlook for demand in early 2019. But the Minneapolis Star Tribune recently quoted Moodys Analytics chief economist Mark Zandi remarking that he would lower his growth forecast for 1Q2019 from 2.6% to just above 2% if the shutdown lasted into Feb-2019, with further downgrades for each week the shutdown lasts beyond that point.

It is not a huge revision, but it does show that a drawn-out shutdown becomes another factor potentially creating pressure on the US economy, joining trade spats and stock volatility.

Potentially, it could take some time for the ripple effects of the government shutdown to affect demand for air travel, but shaky consumer confidence and uneasiness over the duration of the shutdown could eventually pressure demand in the US market, which could affect pricing traction.

Delta Air Lines recently issued guidance for 4Q2018, with unit revenue estimates of an increase of 3% versus previous forecasts of 3.5% growth, noting that the pace of improvement in close-in yield momentum in late Dec-2018 was slower than expected.

The company’s slightly lowered unit revenue estimates spurred a major decline in airline stocks. Delta had the misfortune of releasing those estimates on the same day as Apple warned of lower sales projections, citing slowing iPhone sales in China.

Before that guidance, Delta stated that it was reducing its 2019 domestic capacity by 150 basis points year-on-year in 2019, noting that there could be some softness in domestic demand. That was before the shutdown, which, depending on its duration, could eventually add additional pressure to US domestic demand.

This shutdown may soon become the longest in US history

The stalemate between US legislators and President Trump over border wall funding shows no signs of abating, which means the risks to a weakening economy could grow. A softening economy will no doubt eventually have ripple effects on numerous industries, including aviation and aerospace.

However, so far, the economic risks stemming from the shutdown are doing little to bring an end to what has the potential to become the longest government shutdown in US history.