There has been no shortage of new route announcements in the US during the COVID-19 pandemic, from both full service and low cost operators. But the moves made by larger, global network airlines appear to be more temporary in nature, whereas some low cost operators are making more permanent moves to position themselves favourably once some sense of normality returns.

Those low cost airlines have actually grown their seat share in the US during the pandemic, and that growth shows no sign of slowing.

Of course, some airports have also reaped benefits from those evolving network changes, including Austin Bergstrom International and Miami, both of which have had new route additions from low cost and full service airlines.

US airline capacity continues to climb as Delta slows demand

Nearly all US airlines have undertaken network shifts during the pandemic as long haul markets have been essentially shuttered since Mar-2020. (That is set to change in Nov-2021 when some travel requirements to the country change.)

The result has been a focus by the country’s airlines on domestic travel and nearby international markets.

Indeed, even as bookings slow and cancellations grow due to the rapid spread of the Delta variant of COVID-19, most airlines expect the slowdown to be short-lived, with a rebound to occur as the end of year holiday season gets under way.

Data from CAPA and OAG suggest that domestic ASKs in the US will tick slightly above 2019 levels by YE2021. 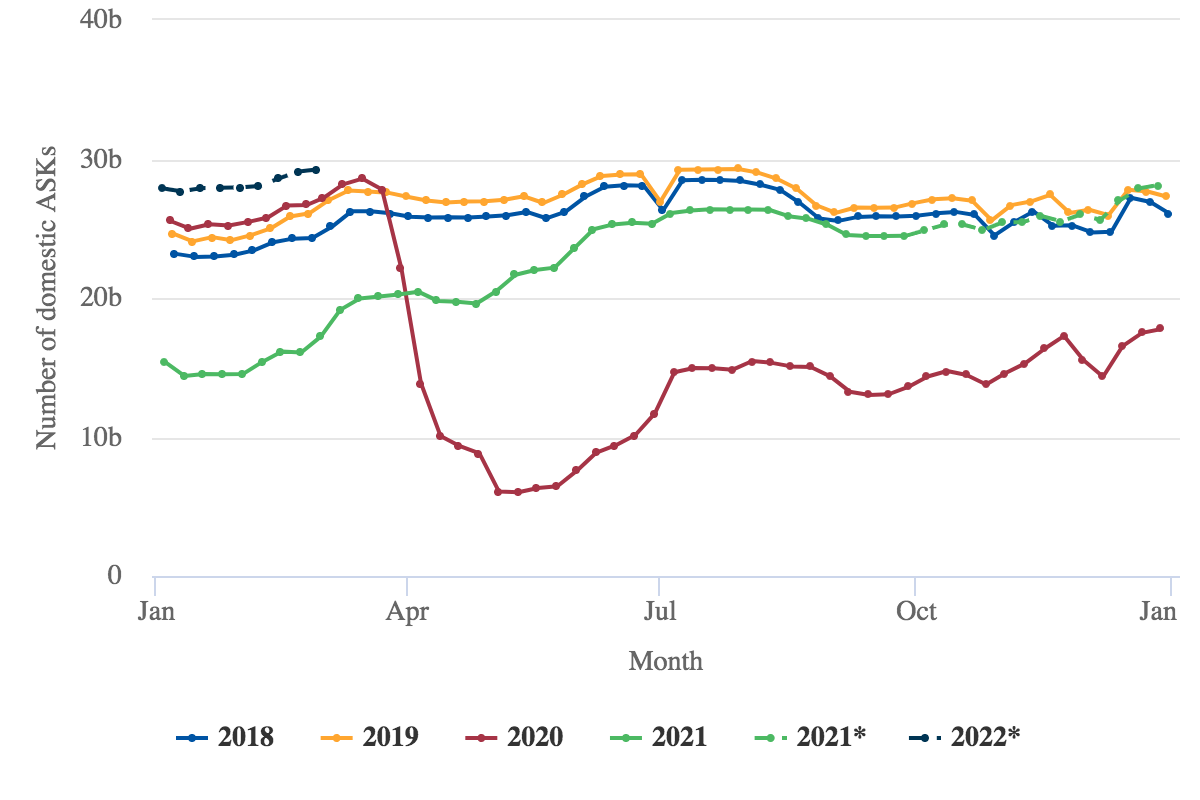 * These values are at least partly predictive up to 6 months from 20-Sep-2021 and may be subject to change.

Some of the most interesting network moves in the US have been made by low cost operators, which have the flexibility to move more quickly into point-to-point markets favoured by leisure travellers, who continue to lead the recovery.

Southwest Airlines is one of the standouts, having added more than 17 new cities during the coronavirus crisis. The airline’s executives have previously said that those routes were meeting expectations and have been on the airline’s radar for years, partly due to conclusions by the company that the routes had a low risk in terms of maturation.

The company’s CEO Gary Kelly has said that those markets are permanent additions to the airline’s network.

It is not clear how many more new markets are in the offing as Mr Kelly explained that a good portion of Southwest’s aircraft will be dedicated to restoring flight activity into the airline’s existing network.

JetBlue, meanwhile, is launching 20 new flights from New York LaGuardia in the US autumn as part of its new Northeast Alliance with American (which is now being challenged by the US Department of Justice).

Low cost operators flock to Miami during the COVID-19 crisis

One airport that has garnered its fair share of service from low cost and ultra-low cost carriers during the pandemic is Miami International.

Spirit Airlines, which is headquartered in nearby Fort Lauderdale, plans to offer 29 daily flights from Miami to 30 destinations beginning in Oct-2021. Although Spirit will not be offering daily service on all those routes, it is a big step for the airline, and other low cost operators have also zeroed in on Miami during the pandemic.

JetBlue has also added Miami to its network in 2021, and as of late Sep-2021 offered flights to Boston, Los Angeles, Hartford, New York Newark and New York JFK.

The push by those lower cost operators from Miami is driven in large part by changes in the airport’s cost structure. CAPA's sister publication Aviation Week has reported that in 2018 Miami switched many of its gates to a preferential-use operation, with fixed charges rather than a common use method with a per-use cost structure. The publication stated that the change had allowed airlines to use their assets more efficiently and spend less per passenger.

At the same time as Frontier could be making a push from Miami due to better economics, the airline has decided to cease operations from Los Angeles international airport during 4Q2021. The airline’s executives recently explained that the airport was not cheap to operate from to start with, and that another significant cost increase was set to occur due to new construction.

“We’ve moved service to airports where we are saving on a CPE (cost per enplanement) basis, a double digit number of dollars per passenger”, said Frontier SVP Commercial Daniel Shurz. The airline has launched flights from Hollywood Burbank airport and offers flights to Denver, Las Vegas and Phoenix.

Frontier has also been expanding from Ontario Airport in Southern California, adding services to Atlanta and bolstering frequencies on services to Denver.

Austin Bergstrom International airport has also garnered a lot of attention from airlines during the COVID-19 crisis.  Even before the pandemic the airport had become a focus city for Delta Air Lines, and the company aims to maintain that status for Austin. 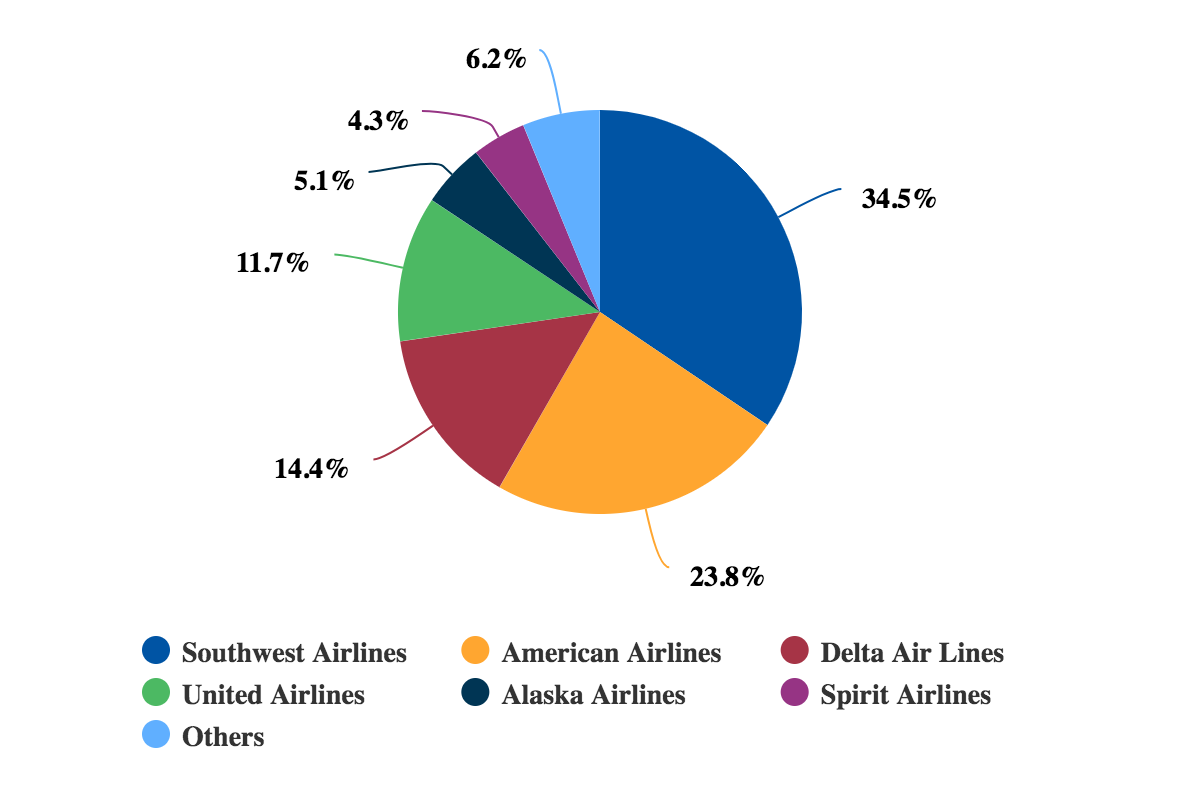 US low cost airlines grow their seat share during the pandemic

US major airlines have also made network pivots during the pandemic.

United operated its 50-seat CRJ550s on point-to-point routes during the US summer and Delta Air Lines also added some seasonal routes to high demand markets during the summer season.

Those moves are more temporary in nature, and now that the US is opening up in Nov-2021 to passengers originating outside the US, provided that they have proof of vaccination and a negative COVID-19 test, major airlines will look to restoring some long haul routes.

For the moment, ultra-low cost and low cost airlines continue to snap back to pre-pandemic capacity levels faster than major airlines. Data from CAPA and OAG show that the proportion of low cost seat deployment in the US has jumped compared with 30% in 2019, and has held steady at approximately 34% through Sep-2021. 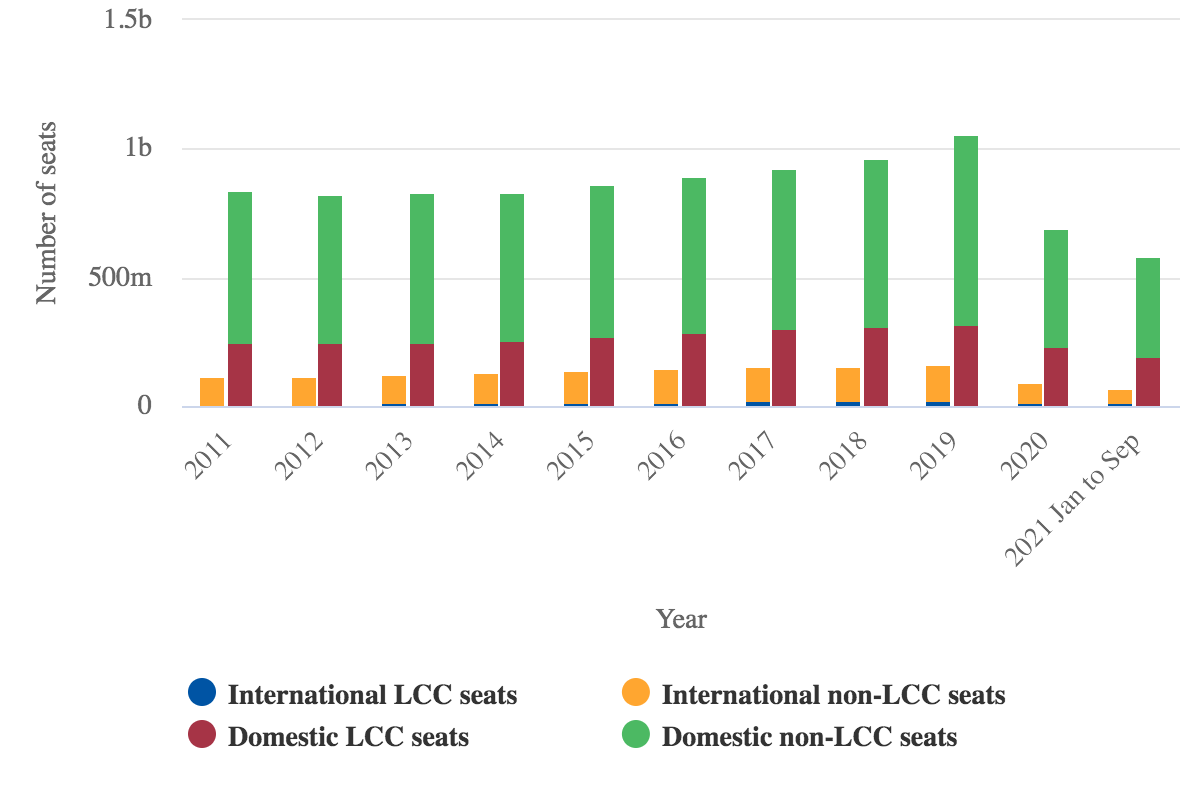 US airlines have had to pivot their networks during the pandemic – largely out of necessity.

But low cost operators have worked to add markets that were on their radar before the crisis, and their series of opportunistic moves may not be over.