US government dubious about growing US airline optimism

The current level of optimism among US airlines is at a pandemic peak as bookings begin to increase. Now discussion is pivoting to an actual return of yield management, after those companies have spent the past year scrambling to set prices to match highly unpredictable levels of demand.

Those airlines are also joining a larger coalition of travel industry organisations in pushing the US government to forge a plan by May-2020 to restart international travel by the country’s summer high season.

However, it is tough to predict how the government will respond to the request. At the moment, the US Centres for Disease Control (CDC) continues to warn against travel, in order to avoid a surge in cases as vaccine roll-outs continue.

Those cross-currents reflect the reality that industry faces as it works toward a full recovery – governments balancing the ongoing management of a major public health crisis while also working to jump-start their respective economies.

Recently, IATA calculated that in just under three months after the US began vaccinating its population, demand for domestic travel is around two thirds of pre-crisis levels.

In Feb-2020 the association calculated that domestic booking had reached approximately 50% of 2019 levels, and it grew to 60% for the first ten days of Mar-2020.

IATA declared that US airlines might start to see light at the end of the tunnel, and recent commentary by those operators shows a renewed sense of hope.

“Bookings…are coming up very close to what we’ve seen in the past”, American Airlines CEO Doug Parker recently stated, adding that in early Mar-2020 the bookings were broadly 20% lower than in 2019.

The one constant during the uncertainty of the pandemic was the compression of booking windows within 14 to six days before travel, said Delta president Glen Hauenstein. But now booking curves are starting to widen.

“In the past six weeks, we’ve seen that move out, so that bookings that are beyond 60 days are almost flat to 2019 levels, just down [a] few points”, Mr Hauenstein said.

And although capacity levels remain fluid, for now domestic US ASKs during the peak summer travel period are forecast to exceed 2019 levels. 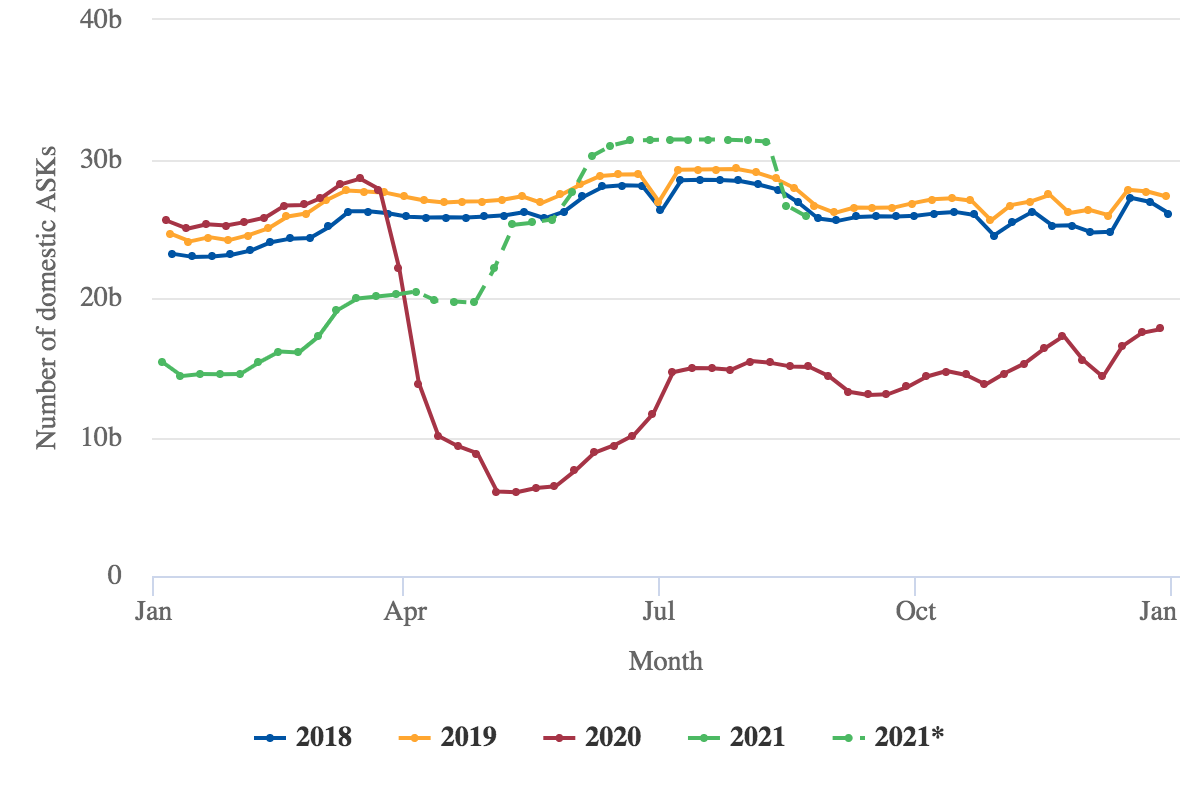 * These values are at least partly predictive up to 6 months from 22-Mar-2021 and may be subject to change.

For those airlines there are some green shoots in yield traction

There are also some discussions among US airlines regarding a return to yield management, although no operator is suggesting that pricing will reach 2019 levels anytime in the near future.

“We haven’t been doing yield management in the airlines for a while”, said American Airlines' Mr Parker. “We’ve just been pricing the product and leaving all the buckets open and taking what we can.”

But now, he explained, the airline is getting to the point “where we’re going to actually be able to try and start pushing some yield up as the loads start to get back to former levels”, Mr Parker stated.

“You look out to the summer, and there are far more inventory closures across the board at airlines than there would have been for March”, United Airlines CEO Scott Kirby recently stated. “Pricing is going up as a result of that.”

However, Mr Kirby explained that prices would not catch up to 2019 levels, “particularly because of the lack of business travel…but yield management…should be a positive tailwind as demand accelerates to driving higher yields”.

But in order for the large three global US airlines – American, United and Delta – to achieve a full recovery, long haul international travel needs to rebound. With numerous travel restrictions still in place, the recovery in that travel segment is being pushed further out into the future. And in the short term, a third wave of rising COVID-19 infections in Europe could crimp hopes that some recovery in trans Atlantic travel could occur in the US summer time frame.

Yet more than 20 travel industry groups – including IATA, Airlines For America and the US Travel Association – have banded together to push the administration of US President Biden to create a framework by 1-May-2012 to reopen international travel for the busy summer season. They have suggested that a negative COVID-19 test or proof of vaccine should be accepted in lieu of quarantines, exempting vaccinated individuals from testing requirements, and that there should be an update of CDC guidance to state that vaccinated individuals can travel safely.

Yet when those groups formally sent a letter to the US administration outlining their suggestions, CDC Director Rachel Wolensky cautioned that “if we don’t take the right actions now, we will have another avoidable surge, just as we are seeing in Europe right now, and just as we are so aggressively scaling up vaccination.”

Ms Wolensky called on the American people “whether vaccinated or not, to recommit to doing the right thing” with respect to the spread of the virus. Those measures include wearing a mask, social distancing and to “avoid crowds and travel”.

The US Biden administration adopts a measured stance on vaccine passports

Americans are a long way from heeding that call.

Favourably, for airlines, daily passenger throughput at US Transportation Security Administration (TSA) checkpoints has exceeded one million during 18 days of Mar-2021.

Even as those levels remain far below 2020 throughput, they’re trending in the right direction even as the CDC is still advising against travel.

Given the formidable task the Biden administration still has in vaccinating the American population, and working to prevent another surge in case counts, the industry could face an uphill battle in reaching its goal of jump-starting long haul international travel during the next few months.

Additionally, although there has been a push for the Biden Administration to issue federal standards for vaccine passports, nothing appears to be imminent.

“It needs to be private; the data should be secure; the access to it should be free; it should be available both digitally and in paper, and in multiple languages; and it should be open source”, said Andy Slavitt, a COVID-19 advisor to President Biden.

“We know that there are — there are efforts that are under way, led by nonprofit collaboratives and the private sector, all working on exactly that type of thing”, Mr Slavitt continued.

The link between vaccinations and increased demand has clearly been established in the US, and the country’s weary airlines are welcoming the unleashing of pent-up demand.

But virus containment remains the top priority of the US government, and the push by industry to reopen borders may not gain traction in the short term. And the reality is that in many ways the US bubble thinking is not shared by many others - notably among Europeans experiencing a third wave, and Asians who have much more conservative, health-prioritised attitudes.