Something remarkable has been happening in the US airline market in recent years. When LCCs first arrived on the scene, their keynote features were maximum utilisation of aircraft and of space.

That included a pricing model designed to deliver much fuller aircraft. But, as observed in the Centre’s “Global LCC Outlook Report: “The World has Changed” (free for download from our website https://centreforaviation.com/lcc/report), America’s full service airlines are becoming more like the old LCCs than the LCCs themselves. One distinguishing feature increasingly is that the LCCs operate newer aircraft.

But, as Oct-2009 traffic data are showing, full service airlines are not only following the LCCs’ ancillary pricing model, by charging for an increasing range of “frills”, they have pared back capacity so much that they are now consistently operating with higher load factors than their low cost competitors. Only Allegiant, with its unique model, operated with a higher occupancy.

For example, Delta, yesterday reported that, with a reduction of  8.3% of system capacity y-o-y, while its passenger traffic was down 6.5% for the month, it produced a load factor increase of 1.6ppts, to 84.2%. Domestically the load factor for the month was 83.9%, up only slightly on last year. This still left it more than a full percentage point behind United and Continental. 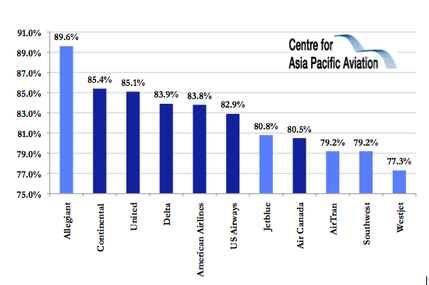 The Air Transport Association has been concerned for some time at the impact these high load factors are having on consumer preferences, as crowded aircraft and often lower service levels, in older aircraft, cause dissatisfaction. And so the market begins to turn on its head.

This is a long term trend

EXTRACT from the Centre’s “Global LCC Outlook Report: “The World has Changed”, noting how US airlines have reduced capacity and greatly increased load factors since September-11, 2001:

“This contraction is partly testimony to an enforced discipline to reduce capacity and goes part way to explaining the improved profitability of the airlines during this period of strong economic growth. As things gradually recovered following September 11, the financial straits they had suffered made full service carriers more circumspect about adding new capacity – and, even if they had wanted to, their balance sheets often did not permit. Load factors improved as a result.

The domestic industry’s 10-11% load factor increase for 2008 over 2001 has done wonders for the bottom line – while simultaneously reducing the industry’s carbon footprint!” 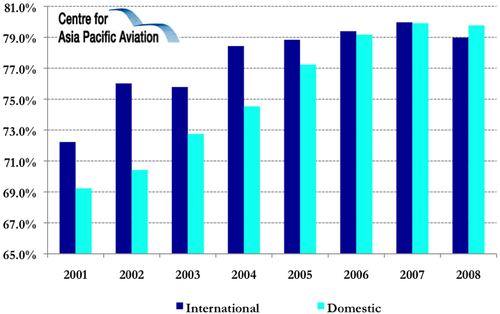 The 300 page report looks in depth at the ways this industry is changing – and not just in the US….