Despite a certain level of maturity, route development in the US continues to evolve.

The three largest US global network airlines are largely focused on leveraging the strength of their hubs, but Delta Air Lines has also built up a smaller group of focus cities during the past couple of years: in Raleigh/Durham, Cincinnati (a former hub) and Boston, which is a stronghold for JetBlue.

Delta’s continued build-up in the market could prove to be a challenge for JetBlue in Boston, which is the airline’s largest focus city by departing frequencies (as of late Feb-2019).

In 2019 the US ULCCs Spirit and Frontier are making a push from Delta’s Raleigh focus city, after Frontier’s market share at the airport reached nearly 6% in 2018. Spirit is also the first US ULCC to enter Charlotte, where American is the dominant airline by a wide margin. American has already responded to Spirit’s mild market entry by adding capacity to the markets where Spirit plans to launch services.

None of those developments are earth shattering; but they do reflect a level of posturing that remains in the the US, despite four airlines dominating the market.

American and United work to maximise their strength in domestic hubs

With American, Delta, United and Southwest representing nearly 77% of US domestic ASKs, there are not huge network shifts in the market; however as that maturity level grows, operators are working to carve out new opportunities toward ultimately strengthening their revenues.

United States percentage of domestic ASKs by airline, as of late Feb-2019 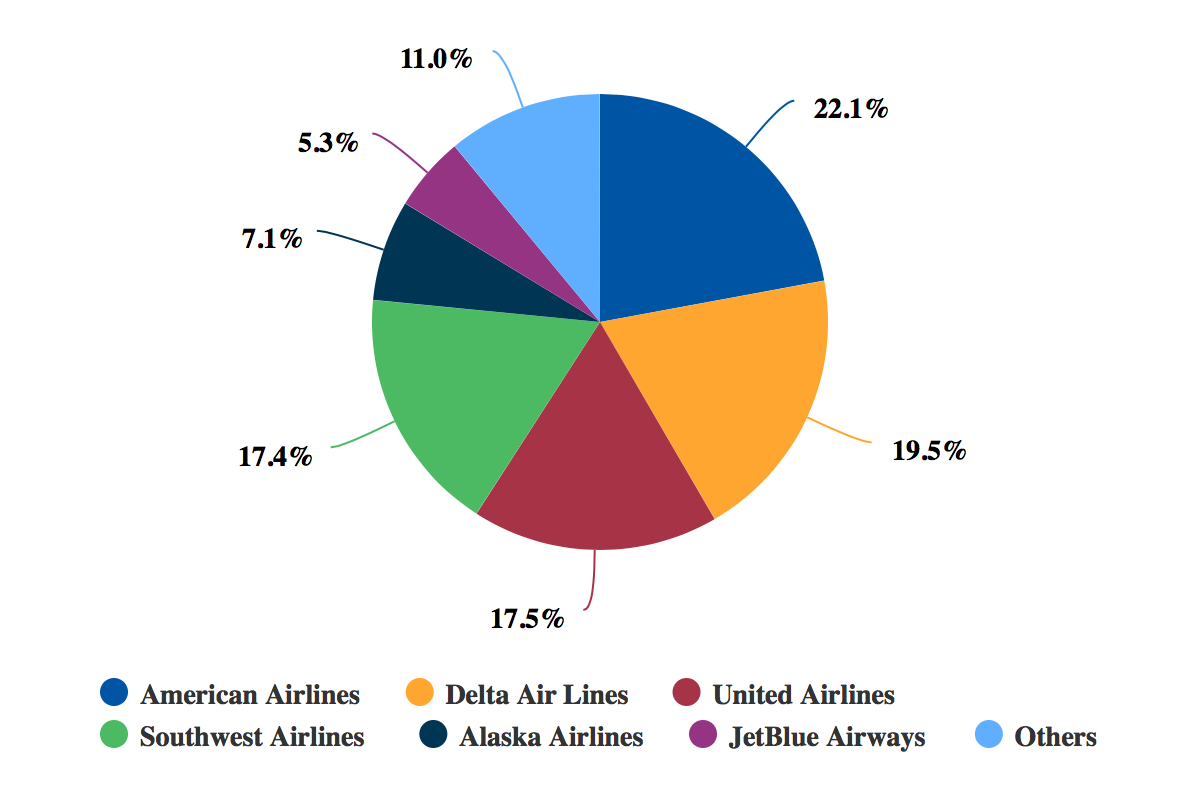 Among the three large global network airlines, their respective network strategies are fairly clear cut – build up their hubs to maximise connections in order to bolster their revenues.

During the last couple of years United has opted to increase its capacity at higher levels than its peers to strengthen its competitiveness in the US market, and has rebanked hubs in Chicago O’Hare and Houston Intercontinental to strengthen connections. The airline is currently in the process of rebanking its Denver hub.

This year American Airlines is in the process of converting nine mainline gates at its largest hub – Dallas/Fort Worth – to 15 regional gates (according to the Dallas Morning News) and is adding 100 daily flights from the airport.  Some of the airline’s new routes planned from DFW in 2019 include Augusta, Georgia; Bakersfield, Burbank and Monterey (seasonal), California; Yuma, Arizona; Gainesville, Florida; and Flagstaff, Arizona. American serves many of those routes – Yuma, Flagstaff, Monterey and Burbank – from its hub in Phoenix, but the airline has obviously concluded that it can reap solid yields on those routes from DFW as well.

At Charlotte Douglas International airport, where American has a 90.5% share of system wide ASKs, the airline is adding four gates near the end of 2019. In 2019 American is facing new competition from the ULCC Spirit Airlines at Charlotte, an airport that presently only has ULCC service from Mexico’s Volaris, which offers flights to Guadalajara from the airport.

Even as Spirit seems to pose a minor threat to American at Charlotte, American has previously declared that Charlotte, Washington National and Dallas/Fort Worth produce higher margins than its other hubs (which include Phoenix, Philadelphia and Miami).

Obviously, American wants to ensure its margin integrity in those hubs and is flexing some muscle in Charlotte as Spirit enters the market. 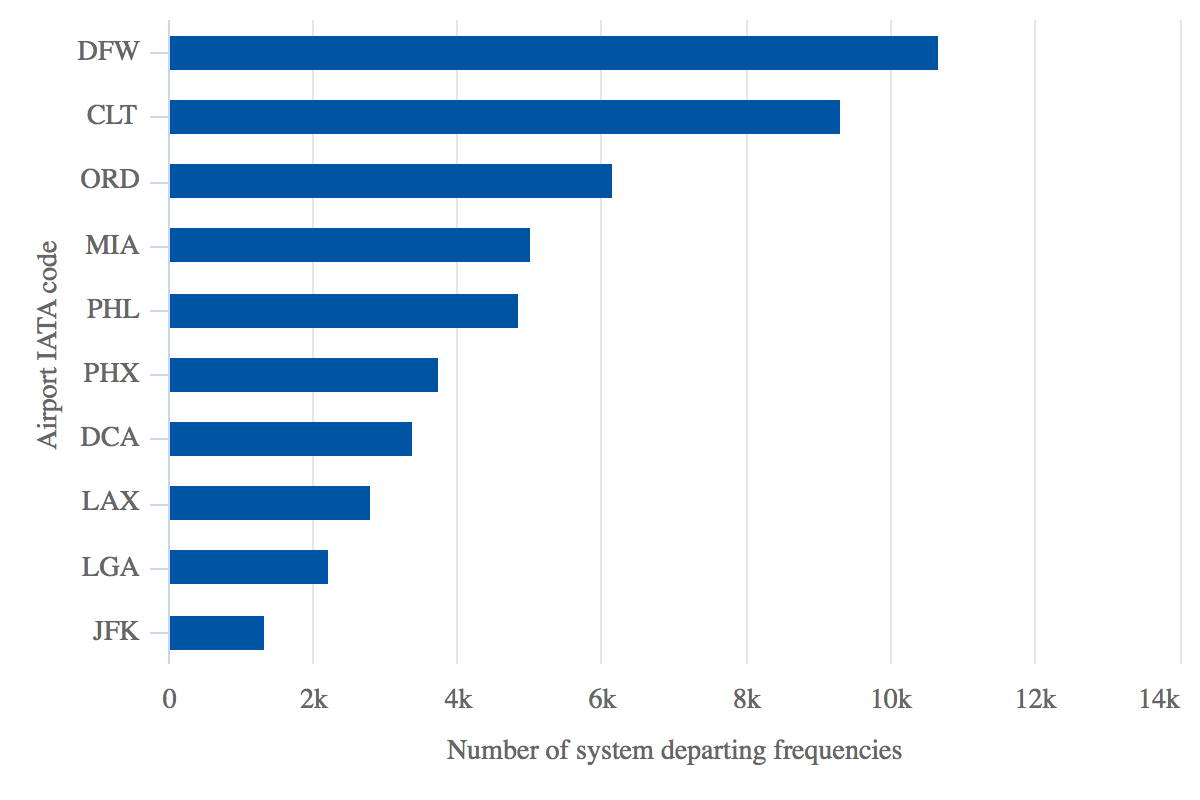 Spirit and Frontier join Delta in building up Raleigh-Durham

Spirit is banking on some connecting traffic from Charlotte through Fort Lauderdale and Orlando to its growing network in the Caribbean and Latin America. During 2018 Spirit launched a raft of new international markets from Orlando, and has stated that there are connecting opportunities to international destinations from the airport.

The airline has some banking structures at its largest base in Fort Lauderdale, but for now connections represent just a fraction of its operations. However, Spirit appears to be calculating that some customers will flow over Fort Lauderdale and Orlando from Charlotte to its growing network in Latin America and the Caribbean.

Spirit is also adding Raleigh Durham and Austin as new markets in 2019, and the ULCC Frontier is also capping off a push from Raleigh.

Delta Air Lines has been building up Raleigh as a focus city during the past couple of years and holds a 27% ASK share at the airport as of late Feb-2019, as well as 35% of its departing frequencies.

Raleigh-Durham International percentage of departing frequencies by airline, as of late Feb-2019 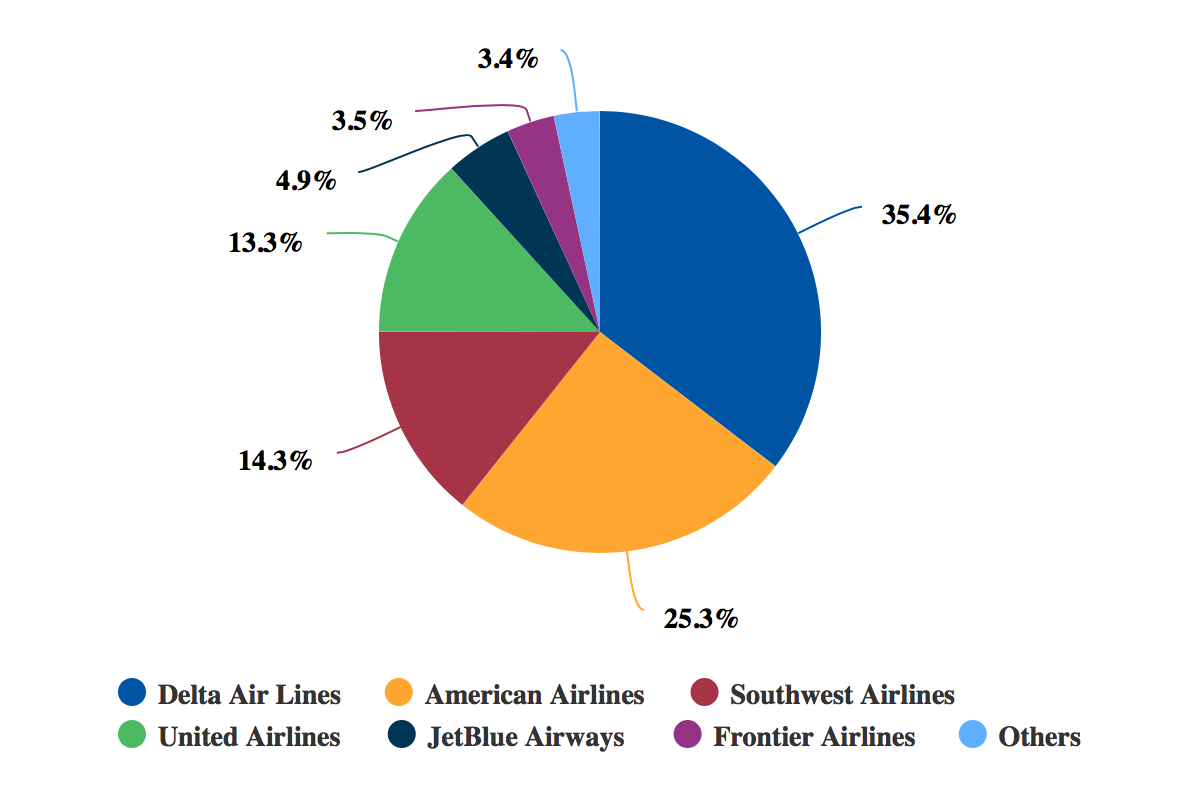 Despite the welcome build-up by Delta, for a few years Raleigh was working to secure service from Spirit, assuming that the airline’s presence would expand its market and draw new customers.

Spirit’s fellow ULCC Frontier made a push from Raleigh-Durham in 2018, with growth of 173% in enplaned passengers year-on-year.

Through Frontier’s expansion, and with Spirit’s market entry, the airport will have a solid ULCC presence.

In addition to Raleigh Durham, Delta has focused on focus cities in Boston and Cincinnati (a former hub) during the past couple of years. Before its build-up in Raleigh, Delta had concluded that it was a fast growing city with bright economic prospects, and no airline had a 15% share of the market there. In 2018, Delta’s market share in Raleigh-Durham was 30.7%.

That thesis does not apply in Boston, where JetBlue holds a nearly 32% share of departing frequencies and has ambitions to grow its daily departures at the airport to 200.

During 2018 JetBlue did cite some unit revenue pressure on Boston leisure routes “tied to growth from a legacy airline”, but concluded that those trends were improving sequentially and stressed that, given Boston’s geographic location, it was made for an airline that specialises in point-to-point service.

Still, Delta’s growth in Boston continues unabated as it prepares to launch services to four key business destinations in 2019: Chicago O’Hare, Newark, Washington National and Cleveland. The Boston Globe has reported that Delta is aiming to grow its daily departures from 110 to 144, which shows that it will continue to challenge JetBlue’s dominance in Boston and compete fiercely for the corporate accounts that JetBlue has worked to capture.

US operators are working to create opportunities in a consolidated market

As the US market settles and continues to digest the consolidation that has taken place during the past couple of decades, operators in the market are still working to make their own opportunities in the market place.

These results of those efforts, as well as the winners and losers, should emerge during the next couple of years.