US-China traffic increases by around 200% over past decade; United has 30% capacity share

Passenger levels between the US and China, the world’s two largest aviation markets, has increased by almost 200% over the past decade, to a record 2.7 million annual passengers in 2010 (+30.5% year-on-year). Comparatively, passenger numbers between Japan and the US reached 10.8 million in 2010, 2.3 million on Hong Kong-US and 3.9 million on South Korea-US routes. All these countries however have considerably fewer airports and population levels than China.

Traffic between the US and China is expected to grow strongly from this relatively small base as airlines from both sides increase service. However, the US and China air market remains highly regulated, while capacity constraints at China’s largest airports also limit growth prospects. 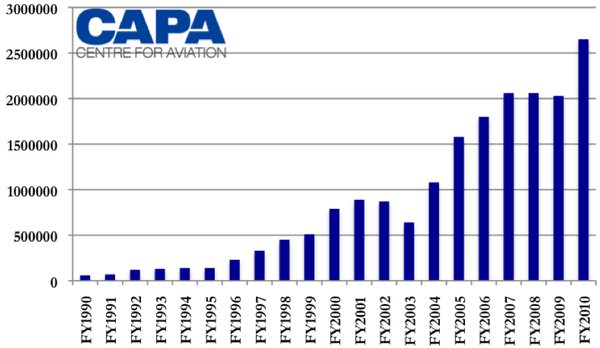 Source: CAPA – Centre for Aviation and US DoT

United Airlines is the dominant carrier on US-China routes with a 30% capacity share from 79 weekly services. United is trailed by Star Alliance partner Air China and American, according to CAPA's Country Analyser Tool. Four US and four Chinese carriers operate services between US cities and Chinese cities, with US carriers holding around 60% of the total weekly capacity, according to Innovata schedules data. 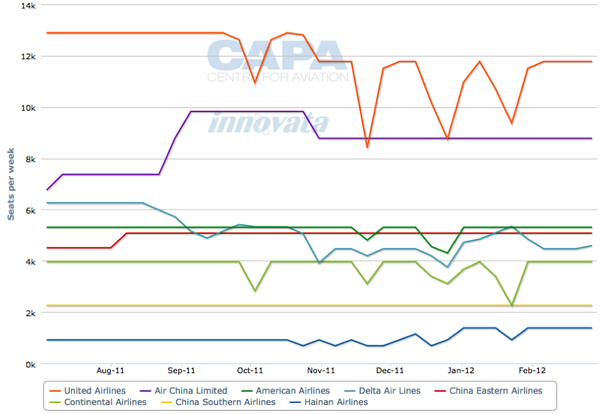 United Continental President and CEO Jeff Smisek recently stated air travel demand between China and the US will remain strong despite concerns about global economic weakness. "Demand on our routes to China is strong. I don't see that slowing. They continue to be among our most important international routes. We expect the economic relations between the two countries will continue to grow over time...Given the level of the demand, our assumption is that the Chinese economy will continue to grow in a fashion that exceeds the growth of most other geographies for a considerable period of time," Mr Smisek said.

Delta Air Lines launched Detroit-Beijing service on 01-Jul-2011, to become the sole operator on the sector. The service is operated five times weekly with 269-seat B777 equipment. Over summer 2011, Delta will operate 44 weekly services between Detroit and six Asian cities, with a total of 47 weekly services to China following a significant expansion to the country in recent years. Delta now serves three Chinese cities non-stop from Detroit, namely Beijing, Shanghai and Hong Kong. In Jun-2011, Delta also announced a new codesharing agreement with China Eastern Airlines.

United Airlines, on 20-May-2011, launched Shanghai Pudong-Los Angeles service, with daily frequency, marking the carrier's third route to Shanghai Pudong, in addition to services from Chicago O'Hare and San Francisco. American similarly launched service on the sector in recent months, also with weekly frequency, on 05-Apr-2011. China Eastern Airlines also operates on the route and is the largest operator on the sector. The route pair is the only one between the two countries with more the two airlines present.

The Chinese carriers are also expanding their presence in the US. On 28-Aug-2011, China Eastern Airlines launched twice weekly Shanghai Pudong-Honolulu service. The carrier also reportedly plans to launch Shanghai-St Louis cargo service with B777F equipment from 23-Sep-2011. The service will operate once weekly, with plans to increase frequency up to three per week.

Meanwhile, Air China launched a second daily Beijing-Los Angeles frequency on 01-Sep-2011. The carrier is the sole operator between Los Angeles and Beijing. Air China vice chairman Yinxiang Wang this month separately confirmed the carrier will upgrade its fleet on all its US routes in 2012. B747-400 equipment will be replaced with B777-300ERs, configured in a three class configuration, with first class suites and flat beds in business class. 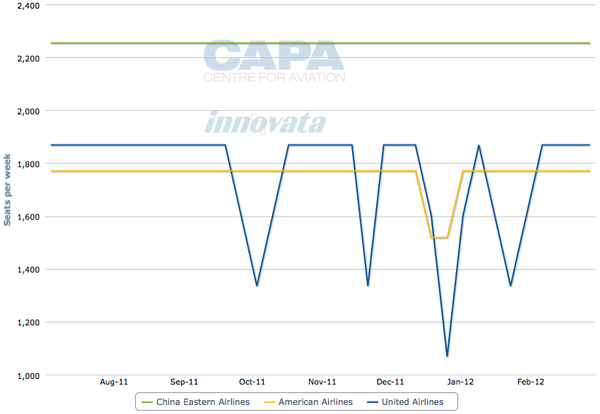 Service between the world's two largest aviation markets will continue to grow. US airlines are likely to follow their European and Asian counterparts in expanding into China - and Asia generally - to drive growth as domestic and traditional markets struggle. The main gateways are likely to remain the focus, subject to the availability of landing slots at conducive times. China's high potential second tier markets will come into the frame later in the decade, as Chinese economic development spreads and aircraft types capable of serving thinner markets profitably enter the fleets of US airlines.

The Chinese carriers are being compelled to look at international markets for different reasons and have a clear mandate by the CAAC to explore foreign destinations, including the US. The dominance of US carriers on China-US segments is gradually being eroded as Chinese carriers grow their international networks, raise their competitiveness, and Chinese outbound travel proliferates. It would not be surprising to see a 50:50 split by the middle of this decade, or sooner, which could be a catalyst for greater openness by Beijing.