US carriers remain bullish on demand as capacity discipline ensues

Current robust demand trends are creating a sustained confidence among US carriers that the airline business now has a strong foundation to withstand fuel price fluctuations and begin delivering consistent positive results. Although the business overall is still not delivering adequate returns, management teams at US carriers are encouraged the building blocks are in place to manage the industry’s cyclicality. The transformation occurring through capacity discipline and shrewd revenue management is beginning to catch the attention of investors that historically avoided the troubled airline industry.

Recently US Airways president Scott Kirby told a group of investors that during the last three years US airline industry revenues have grown in the double-digit range, which he concluded was a remarkable result in the particularly cyclical airline business. The performance appears to be drawing attention from investors that have eschewed the industry based on past performance, as Mr Kirby remarked during the last few months he has encountered and met with potential investors never drawn to the airline business. He believes their interest is an endorsement in the rationalisation ushered in by consolidation and improved capacity management.

The latest figures from IATA show that US domestic traffic increased 1% during Mar-2012 on a 0.7% contraction in capacity, pushing load factors to 84.3%. The association concluded those loads were the highest for any geographical market.

Even as US Airways heralds capacity discipline, the carrier is seeing a slight increase in its 2012 capacity relative to its US legacy peers. The carrier estimates a 1% increase in its supply as a result of taking delivery of 12 larger-gauge A321 narrowbodies that are replacing smaller Boeing 737-300s. Clauses in the airline’s contracts with its pilots and flight attendants also require a minimum fleet level that US Airways must attain, and the carrier remains at those levels. 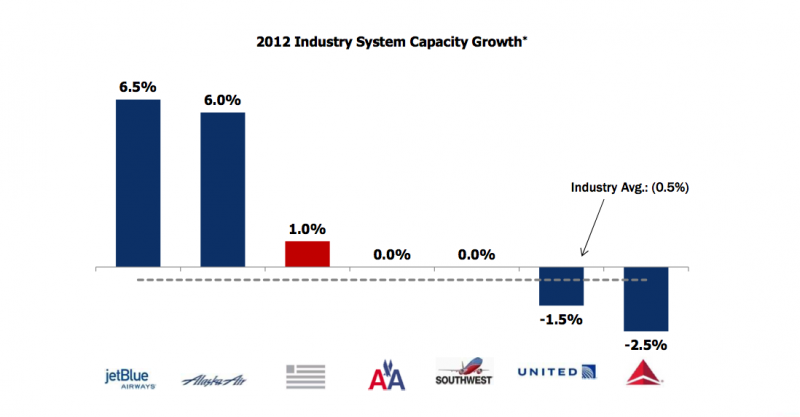 But US Airways sees no challenges in managing the capacity increase as Mr Kirby sees no weakness in demand. He concludes some softness in Feb-2012 was normal volatility; but since that time demand has remained solid, with May’s unit revenues rising in the mid-single digits.

The airline is so bullish on current demand trends that Mr Kirby declared US Airways aims to be aggressive in yield management for the busy summer travel season. “In many places you will find that we are priced higher than any other airline out there, at least our lowest fares are higher than anyone else out there, because we have confidence in the demand environment and don’t want to sell too cheap for the summer.”

He sees no danger in the pricing strategy US Airways is adopting for the summer months. Pointing to the larger macro environment, Mr Kirby states that at the time of deregulation airline revenues were roughly 1.5% of GDP. In 2009 that statistic dropped to 0.6% and has now increased to 0.7%. Using that historical context as a baseline, Mr Kirby believes there is a lot of room for revenue growth in the airline industry. 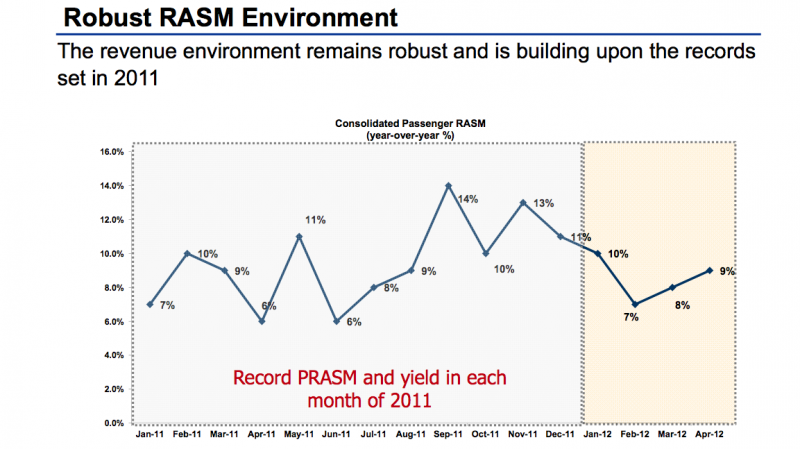 Delta Air Lines is equally bullish about demand trends for the summer as its current bookings for that time period “appear to be in really good shape”, explained carrier President Ed Bastian as he spoke to the same group of investors Mr Kirby addressed.

Mr Bastian estimates unit revenue growth of 7% for Delta during May-2012, and cautioned that the industry was lapping a time in 2011 of very healthy year-over-year revenue improvements. “The performance we are generating sits on top of that,” explained Mr Bastian, who stressed the single-digit revenue growth is not indicative of a deceleration of the business.

Offering additional context to unit revenue growth, Mr Kirby cautioned that investors should consider certain calendar adjustments when they examine unit revenue trends. In 2011 the first day of the month of May was a Sunday, he explained, which means last year there was an extra Sunday, Monday and Tuesday in the month. This year the first day of May fell on a Tuesday, which means an extra Tuesday, Wednesday and Thursday (days with weaker revenue generation) are featured in May-2012. He estimates the difference in calendar days can account for a 100 basis point difference in unit revenues, and a 200 basis point difference from April to May as a result of April having more favourable calendar days for travel.

Delta sees no erosion in the demand momentum, and is especially encouraged by business travel trends. Mr Bastian explained year-to-date Delta’s booked corporate revenues are up 12% despite a 3% capacity reduction.

The next inflection point for Delta in its capacity management is the post Labor Day period (after 03-Sep-2012), said Mr Bastian, who explained the carrier is pulling an additional 5% of capacity from its trans-Atlantic markets during 4Q2012 as a proactive and cautionary measure. He points to some headwinds in Europe, particularly weakened European point of sale as the Euro continues to weaken. 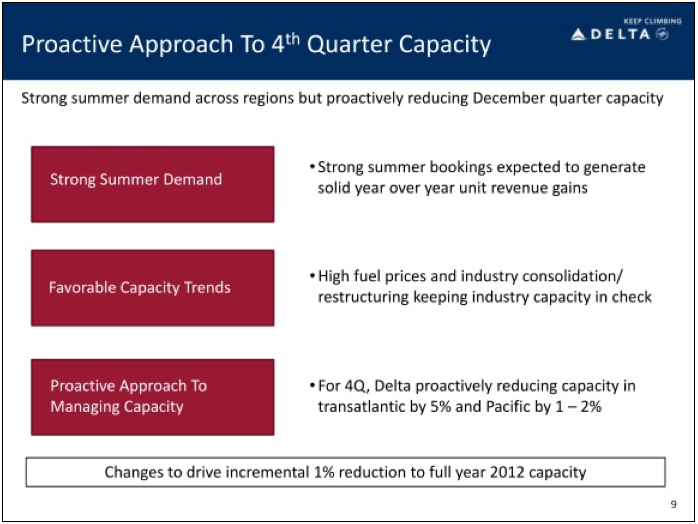 Delta’s SkyTeam joint venture partners Air France-KLM are cutting similar amounts of trans-Atlantic capacity in conjunction with Delta, said Mr Bastian, which allows that business to “retain a high majority of revenues at a much lower cost of production”.

Factoring in the trans-Atlantic cuts, Delta now estimates an overall system capacity reduction of 3%-4% for 2012 compared with previous estimates of a 2%-3% cut. Delta also plans to trim 4Q2012 trans-Pacific capacity by 1%-2%. Mr Bastian stressed that Delta needs to tightly manage its supply in the shoulder periods “if we’re going to continue to hit the revenue premiums that we expect this business to generate”. Delta’s unit revenues grew 14% year-over-year during 1Q2012, which was the best performance in the US industry. 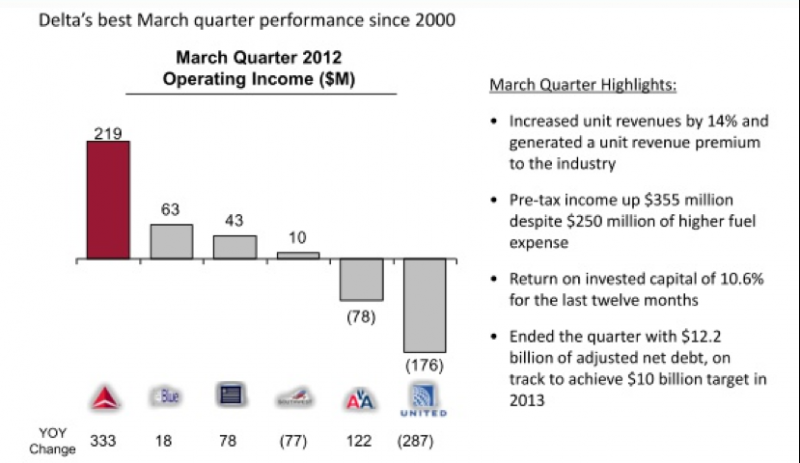 United’s 1Q2012 revenue performance was less stellar than Delta’s as a cutover to a new passenger service system and the integration of a new revenue management system crimped unit revenue growth at just 5.2%. In addition to pressure from system cutovers, United also highlighted that increased capacity in its Asian markets, particularly China, also pressured its unit revenues.

The carrier is pulling down capacity in is trans-Pacific markets for the summer time period, said United CFO John Rainey. United’s overall system capacity during 2012 is expected to shrink from 0.5% to 1.5%. 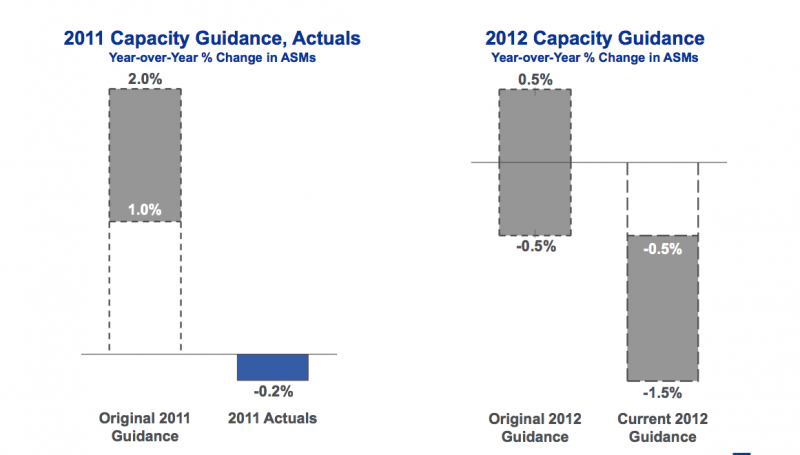 Mr Rainey believes the key lever to delivering synergies of the United-Continental merger, the cutover to the Shares passenger service system, is now in place. While he did not offer any indication of when United would gain revenue momentum, he is actually encouraged by Delta’s performance, noting it took Delta and Northwest a considerable amount of time to realise the nearly USD2 billion in annualised synergies produced from their merger. “That bodes well for us going forward,” remarked Mr Rainey.

He was also quick to point out to investors that United through its world-encompassing network had a unit revenue premium to the industry during 1Q2012.

United revenue performance vs the US industry: 1Q2012 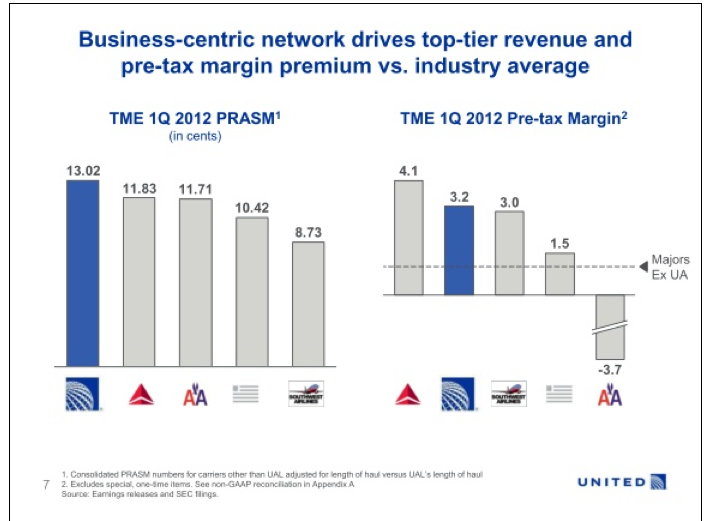 As airlines tout the transformation the US industry is undertaking, they are also monitoring the new reality of fuel price volatility. Mr Kirby of US Airways explained that on 16-May-2012 the carrier’s full-year forecast for the price of fuel was better than it estimated when budgeting for the year. He warns that projected fuel price is an arbitrary number, and just a month ago US Airways’ 2012 fuel price forecast was USD300 million worse than the estimates the carrier initially modeled for 2012.

Mr Bastian of Delta stated another factor in the carrier’s decision to further reduce its 2012 capacity forecast was the “risk that fuel prices could spike at any time”.

Even as fuel prices decrease to the USD107-USD110 per barrel range, Mr Kirby concludes current pricing will remain intact. “We don’t plan to lower fares because fuel prices go down for a month, who knows what they will be next month,” he says.