The large three US global network airlines have solid order books and their fleet plans are largely firmed up for the foreseeable future. But there are shifts occurring as American, Delta and United make subtle adjustments in order to ensure their fleets are sized appropriately.

American has cancelled an order for Airbus widebodies and deferred deliveries of narrowbody jets, while ordering some replacement regional jets. Delta is in the process of replacing a portion of its mainline fleet with new build aircraft, even as it has historically been a big player in the used aircraft market.  United has also ordered regional jets and additional widebodies, and is also actively looking for used aircraft.

All of these moves show that fleet management is a science; airlines are constantly reviewing their fleet plans and making nuanced changes to their aircraft portfolios in order to strike the right cost and revenue balance. 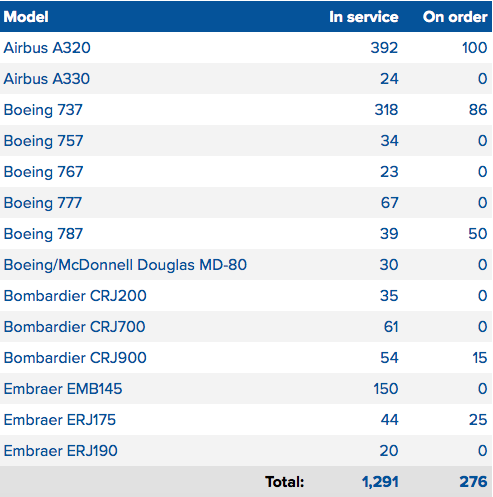 The changes will result in significant reductions in aircraft capex, beginning in 2018. American has calculated that its aircraft expenditures will fall from USD4 billion in 2017 to USD1.9 billion in 2018. However, American’s debt loads are substantially higher than those of its peers. According to YahooFinance, American’s total debut is USD24.08 billion, compared with USD10.99 for Delta and USD14.5 billion for United.

In some ways, American is still managing the fleet integration with US Airways and working to reduce the number of fleet types the merged airline operates. The company estimates its aircraft subfleets should drop from 52 in 2016 to 30 by 2022. “We think there’s even a chance to get to fewer than that, down to 25”, American's president Robert Isom recently declared.

Whittling away at its subfleet numbers obviously creates maintenance savings for American, so it is no surprise that the airline is working to cut its subfleet types nearly in half (based on 2016 numbers).

Delta Air Lines is replacing 30% of its mainline fleet through 2020, and that includes the retirement of its MD-88 jets. 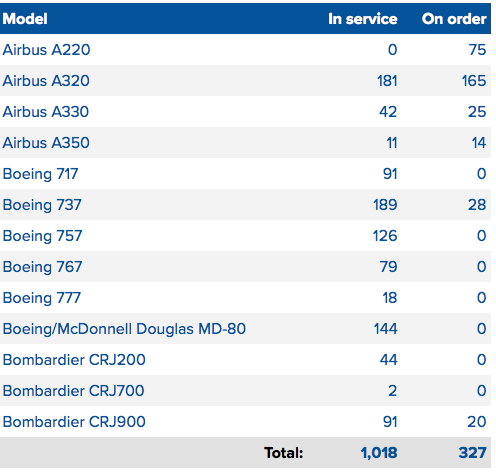 Delta Air Lines projected delivery dates for aircraft on order from OEMs and leased from lessors, as of Sep-2018 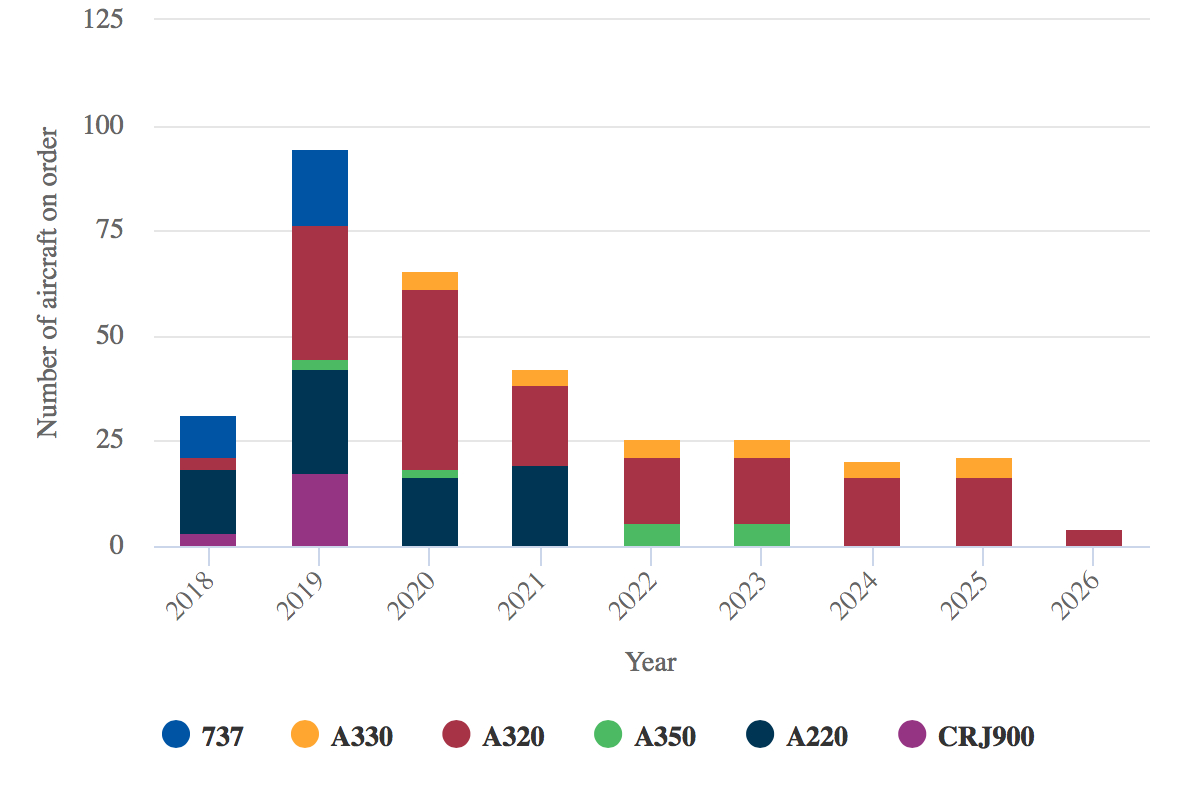 Delta has been historically opportunistic in the used aircraft market. During the past six to eight years the company has acquired used MD-90s and struck a deal with Southwest to lease 717s that the low cost airline inherited in its acquisition of AirTran Airways.

But for now, the airline appears to be focusing on new aircraft acquisitions. Recently, Delta CFO Paul Jacobson explained “those opportunities [for used aircraft] haven’t been as prevalent over the past few years as what we saw five, six and seven years ago with those transactions. But we are still open to it under the right opportunities.”

During the past few years United Airlines has also been more active in the used aircraft market. In 2015 it subleased two Boeing 737-700s from Copa Airlines and struck a deal with the lessor AerCap to lease up to 25 Airbus A319 narrowbodies previously operated by China Southern Airlines.

In 2018 the airline has forged another deal to obtain 20 used A319 narrowbodies and three Boeing 767s from Hawaiian Airlines.

The airline recently stated that it was actively looking for additional used aircraft, and focusing on a number of potentially attractive opportunities. 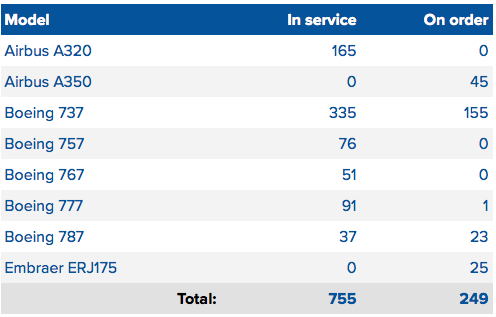 As it works to strike the right mix of used and new aircraft, United is also stressing a certain level of fleet flexibility as oil prices continue to climb. The airline’s management recently advised lease returns and possibly retiring older aircraft.

United explained that when an older aircraft is due for an engine or airframe overhaul, the company can either complete overhauls and continue flying the aircraft, or ground the aircraft and use its parts as spares and replacements. The airline believes the economic benefit of retiring aircraft is positive for its P&L, since it can avoid the expense of overhauls, and parts from those jets are less expensive than buying new parts from third parties. 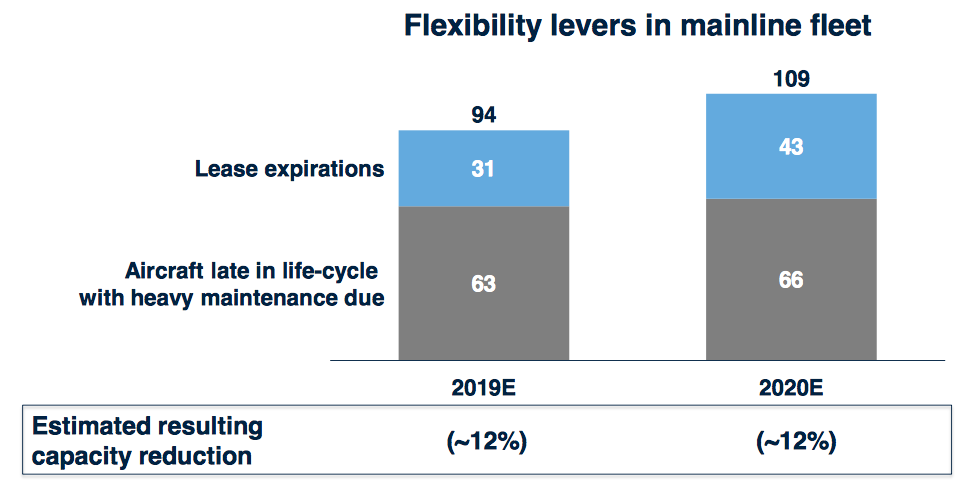 All airlines are constantly looking for opportunities to cut fleet expenses

Airlines worldwide are constantly tweaking their fleet compositions as opportunities for deferrals, cancellations, or favourable opportunities to acquire used or new aircraft arise.

The three large global US network airlines are taking different approaches in managing their respective fleets, with an eye towards climbing fuel costs. Those operators are also constantly looking for ways to be opportunistic in order to lower their aircraft ownership and maintenance costs.