US Airways wrapped up the legacy reporting season announcing it posted a 1Q GAAP loss of USD45 million in 1Q2010 which Chair and CEO, Doug Parker, reported would have been better had it not been for the devastating winter storms in February. GAAP loss was down from USD103 million in the 1Q2009.

President Scott Kirby said 2Q2010 would be profitable, marking only the second quarterly profit since 2007. 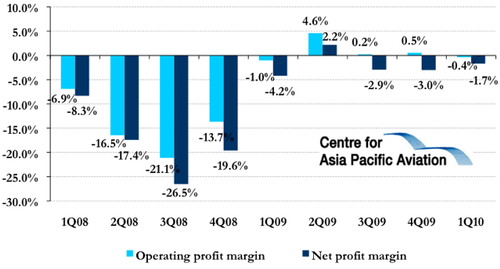 Total revenues in the first quarter were up 7.9% to USD2.6 billion despite a USD30 million negative impact to revenue during the February storms. This improvement was driven by higher passenger yields resulting from an improving economy and the return of business traffic. Express revenues topped USD601 million, up 9.1%

CFO Derek Kerr reported the company continues to see strong year-on-year pricing with improved corporate demand. Corporate revenue was up 35% but still down 6% versus 1Q2008. Booked yields were up 16% year-on-year, but down slightly from 2008. In April, booked corporate revenue was up 45% and overall booked yields were up 20%, although slightly below 2008 levels. “We are getting close to 2008 levels in yield and corporate demand,” he said. “We expect April to be the most difficult comparison but PRASM will be up 13%, while May will be in the high teens and June will be up 20%.

Kirby reported that total RASM was up 11% amongst and called it the best year on year revenue performance of the network carriers. “It’s nice to be back on the positive side of year on year revenue growth,” he said. “But compared to first quarter 2008, it is still down 3%. However, we are getting closer to peak RASM production levels". 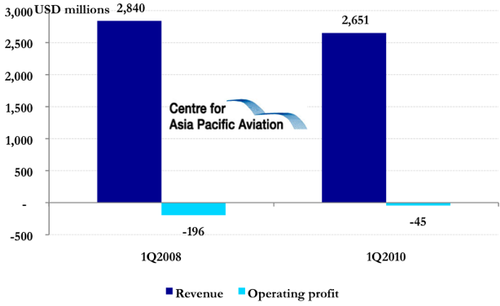 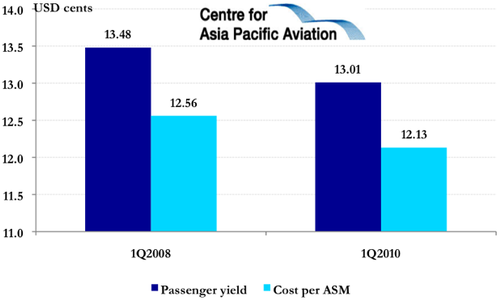 International RASM outperformed domestic, he said, with trans-Atlantic RASM up 19%, domestic up 10% and Latin-Caribbean up 5%. “We expect international outperformance to accelerate in the second and third quarters,” he said.

Kerr went on to say that mainline ASMs will be 71.5 billion for the year, up 1% from 2009 with domestic mainline down 1-2%, international up 8-9% on a 20% increase in Latin America, the resumption of Mexico service after H1N1, new Rio and expected new Sao Paulo service once the Delta slot swap goes through.

The company is maintaining its CASM ex fuel guidance at flat to plus or minus 1% for the mainline in both the second and third quarter while the fourth quarter is expected to be down 1-3% with Express CASM up 2-4% in 2010. 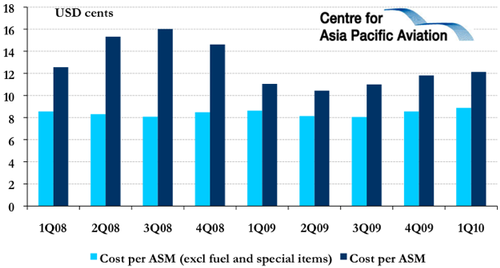 He also said that on an absolute basis, pre-tax margins were the best among the company’s peers.

Would "prefer" to participate in industry consolidation

As with his peers, Parker preferred to say little about the merger activity, falling back on the company’s usual stance. “We believe consolidation is good for industry,” he said. “It reduces fragmentation and creates efficiencies that allow the industry to better withstand economic downturns. It is good for all airlines whether they participate or not.

“As relates to us,” he continued, “we would prefer to participate in consolidation rather than not. We have been very open about that and aggressive in our actions. That does not, however, mean we need to participate. To the contrary; as evidenced by today’s results we have a very strong stand-alone airline that is performing as well or better than our peer hub-and-spoke airlines by every measure be it operating revenue, cost control, financial momentum, absolute financial performance, etc. Consolidation among our competitors will only serve to strengthen our stand-alone airline. So we are supportive of any such potential consolidation.”

Responding to a question about whether there are remaining partners left after a United-Continental merger, Parker said he believes more consolidation will occur. “We don’t believe the door will close on any future consolidation for us,” he concluded.

He noted that US Airways has been talking about the need for industry consolidation for five years. Past mergers with Delta and Northwest brought the number of network carriers to five and should United and Continental reach agreement, that would be reduced to four. “Even with these mergers, the industry is still overly fragmented,” he said. “But it is a lot better than it was five years ago and as a result it will be more stable.”

Kirby echoed United in saying there is more to be realised in US Airways’ participation in the Star Alliance. He noted that United and Continental already have a deeper relationship than US Airways has with either carrier. “We’d even go so far as being in the ATI,” he said, adding that it is unlikely to happen any time soon. “There are opportunities to do more but we don’t know when that will happen with all the merger activity.”

When asked if US Airways was in the same (marginalised) position Continental was in when it was with SkyTeam, Kirby responded to the question as to whether the carrier would jump to a new alliance saying: “I think Star is the best alliance in the world and we are happy to be in it.”

Parker jumped in to say “if a United and Continental merger makes the Star Alliance strong, that is good for everyone.”