US Airways expected to benefit from current environment; American Airlines preparing for strikes

The gain in airline stocks was despite a drop in the Dow (-0.2%) as political issues in Korea mounted and investors remained concerned over Europe’s ability to overcome its debt issues. The decline was despite The Conference Board's report that the US Consumer Confidence Index increased to 63.3 in May-2010, up from 57.7 in Apr-2010. This is the third consecutive monthly increase. Consumer confidence appears to be gaining some traction, according to The Conference Board.

US Airways expected to benefit from current economic environment

US Airways (+10.9%) soared after JP Morgan upgraded its rating on the stock from ‘’Neutral’ to ‘Overweight’ and increased its price target from USD8.50 to USD11.50. The analysts stated the carrier is likely to thrive in the current environment, due to a lack of fuel hedging and the smallest exposure to Europe among the US full service carriers. US Airways' revenue from European services equates to 12% of system revenue, compared with a group average of 20%.

JP Morgan also stated they expect investors to start to look more kindly at airline stocks, due to falling fuel costs, tighter supply and new revenue streams. Airlines may also see improved credit ratings of their debt over the next two years as a result. Analysts at Hunter Keay told Reuters, the sector is also likely to benefit more from the rising US Dollar than other sectors.

American Airlines (+5.3%) also gained. The media reported during trading that the carrier is seeking 4,000 volunteers from its management team to undergo training as flight attendants following reports its cabin crews, represented by the Association of Professional Flight Attendants (AFPA), will strike. American and its flight attendants have been in mediated negotiations since early 2009. AFPA recently received strike authorisation and is also petitioning the National Mediation Board to release AFPA from negotiations and implement a 30 cool off period after which the flight attendants can conduct a strike. 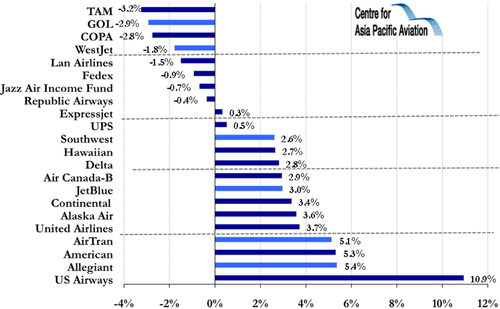