US Airways (-17.4%) and Continental (-16.9%) shares led the American markets down yesterday, as the world's airline stocks were punished in front of a fear of a global pandemic on the scale of the 2003 SARS outbreak.

Even before the UN's World Health Organisation later upgraded the threat of Swine flu to level 4 on its pandemic alert scale, airline shares across the world lost heavily yesterday. Asian carriers, mindful of the enormous impact of SARS, when traffic levels dropped 50% for a short period, saw stocks hammered too.

The world’s airline, airport and aviation supplier stocks were punished in front of a fear of a global pandemic on the scale of the 2003 SARS outbreak. But early trading in Asia was uncertain. At first some leading stocks regained ground today, but then entered choppy trading, as the market re-assessed the immediate threat.

Of European airline stocks, Lufthansa (-9.3%) suffered the biggest fall, aggravated also by a relatively negative outlook for the carrier, reported last week and just beginning to sink in. British Airways (-7.8%) and erstwhile partner, Iberia (-6.6%), which derives much revenue from its Central American operations were among the largest falls among the Europeans. 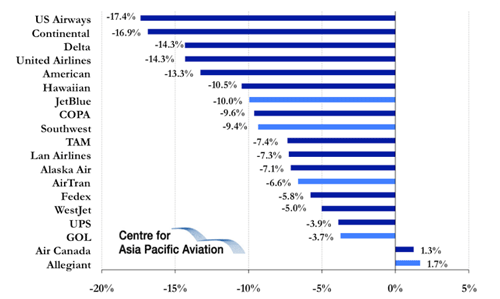