US airlines look to international markets for future growth

The majority of air travel growth will "take place outside of the US borders in developing economies" over the next decade, the US Air Transport Association (ATA) has said. In its Industry Review and Outlook presentation, released this week, the ATA observes that post-recession capacity trends show a “tale of two markets”: domestic capacity has fallen while capacity to/from the US has risen. Over the past decade, domestic capacity has declined by around 8% against international growth of 15%.

The ATA identified seven US carriers for which international operations have become a significantly larger share of their networks over the past decade.

* Scheduled fourth-quarter non-domestic ASMs as a share of scheduled systemwide ASMs, including regional affiliates; an ASM is one seat flown one mile
Source: ATA analysis of Innovata (via Diio Mi) published schedules as of April 29, 2011

Domestic seating capacity declined the most (in percentage terms) in 2009 since 1942. While capacity is being added back into the domestic market, growth remains cautious.

The ATA also noted that capacity is being "rebalanced" with the size of the US economy. There are now fewer domestic ASMs per USD1000 of real USD GDP since 1979.

The ATA noted that the price of air travel has not kept pace with US inflation. Inflation (CPI) increased by 47% between 1Q1995 to 1Q2011, leaving tickets USD81 short.

* BTS reports average fares based on domestic itinerary fares (round-trip or one-way for which no return is purchased). [Averages do not include frequent-flyer or ―zero fares.‖] Fares are based on the total ticket value, which consists of the price charged by the airlines plus any additional taxes and fees levied by an outside entity at the time of purchase.
Sources: BTS National-Level Average Fare Series

The challenge of escalating fuel prices

ATA also noted the negative impact of fuel prices. ATA VP and Chief Economic John Heimlich stated airlines in 2011 are contending with rapidly climbing jet-fuel prices that have outpaced crude-oil prices to reach their highest level since Sep-2008. Mr Heimlich stated that, excluding hedge gains or losses, if US airlines had to contend with USD3 per gallon jet-fuel prices for all of 2011, their fuel bill would increase by around USD15 billion, from USD39 billion in 2010 to an estimated USD53 billion in 2011.

According to the ATA, the US Energy Information Administration projects the full-year 2011 average price of US jet fuel will be USD3.02 a gallon, more than 40% higher than the 2010 average. 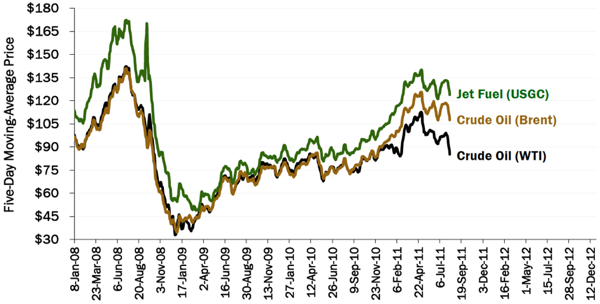 As a result of the increased fuel prices, the costs faced by US airlines have increased by 110% from 2000 levels.

Annually, a 1 cent increase in a gallon costs US airlines USD175 million; a USD1 increase in a barrel costs them USD415 million. To put this into some context, in 2010, US airlines posted an estimated net profit of USD3 billion. This was one of only three profitable years in the entire decade. From 2001-2010, US airlines had a cumulative net loss of approximately USD54 billion, with an average net loss margin of 4%. 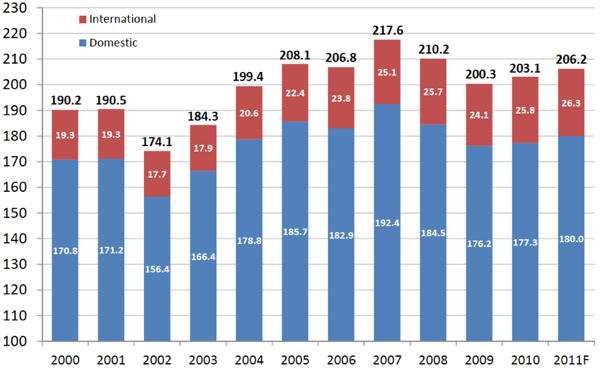 In its annual summer air travel forecast, the ATA predicts that US airlines will carry a total of 206.2 million passengers from Jun-2011 through Aug-2011, roughly 3 million (1.5%) more passengers than for the same period in 2010. This breaks down to an average of 2.24 million will fly per day over summer 2011, a daily increase of 34,000 from last year’s levels.

However, passenger volumes have not recovered from their pre-recession levels of summer 2008 and remain well below the summer 2007 all-time high of 217.6 million. The forecast also shows that travelers are booking international flights in record numbers. The 'tale of two markets' continues.