With new regulations that promise to increase airlines costs, and with proposed taxes and fees that will raise the cost of passenger travel, the US airline industry seems to be under siege from the US government at the very time the industry is pleading with Washington to help it out from the economic downturn.

A new departure tax that will cost Southwest and US Airways alone an estimated USD250 million, along with an proposed increase in the security fee has the industry up in arms saying they will conspire to force capacity cuts and the loss of 10,000 jobs along with 181,000 jobs within the travel supply chain.

But that is not the only thing worrying airlines considering new regulations making their way around Washington. The industry is objecting to the Notice of Proposed Rule making published by the Department of Transportation during the summer calling for airlines to begin reporting a host of ancillary fees rather than the few now required. Those include baggage and reservation change fees.

The rule making cites 19 categories of fees on which it wants to gather data, saying it wants to increase transparency for the consumer. In addition, it wants airlines to disclose the number of bags transported in order to provide more accurate information on lost or late bags.

The Air Transport Association (ATA), which recently filed its objections to the proposed rule, has gained support from at least one travel agent group that has told the government that compliance with some of the provisions affecting travel agents is impossible.

This would be a good candidate for the new evaluation method for federal rule making. The Obama administration has been pushing regulators to go beyond the traditional cost-benefit analysis to determining the cost to the economy as well.

Burdening the over burdened

ATA said the new rules would ‘impose an outsized burden” at a time when it can least afford increasing the cost of doing business. That was confirmed by American Aviation Institute (AAI) Vice President Michael Miller who called the rule “an over-reaching regulatory burden on a deregulated industry.”

AAI said the proposed rule was a major divergence from guidelines issued by the Office of Management and Budget requiring justification for new rule making. It added that DOT provided no economic case for the regulation including costs, benefits and regulatory alternatives.

Calling them excessive, unjustified and invasive, the organisation also questioned the department’s estimates on compliance costs and its assertions that it would increase transparency. It requested the rule be withdrawn pending publication of a Preliminary Regulatory Impact Analysis (PRIA). Requesting public comment on the published NPRM does not relieve DOT from its obligation to publish a full economic analysis, it said.

The industry estimates compliance will cost USD300 million a year, vastly different from the USD150,000 compliance costs estimated by DOT. Indeed, American, Delta, United Continental and US Airways say each of the 19 categories adds more than USD1 million in administrative costs.

Mr Miller noted that it singles out airlines when hotels and car rental agencies also impose fees. Other sectors – cell phone companies and banks  – also impose fees. While the Department of Transportation does not have jurisdiction in those sectors, it is an argument that perhaps, if rules are required, DOT is not the venue for pursuing them.

Transparency for airline, not government

Ironically, the federal government also imposes a plethora of taxes and fees imposed on the passenger and part of another consumer rule, completed in the summer, actually calls for hiding them within the advertised price of a ticket by showing the all-inclusive fare. Historically, airlines have advertised base fares separately.

Southwest said the rule was contrary to past practice and was based on “unsupported speculation that consumers are deceived by the practice.” It noted that as recently as 2006, DOT found compelling reasons to continue the practice of separating government-imposed fees and taxes from the base price of a ticket. The rule also prohibits airlines from informing consumers of applicable fees and taxes in a conspicuous way that will ensure that the consumer will easily see and understand that information, said Southwest.

Complying with this rule would cost between USD24 million and USD30 million, only USD6 million of which would be for IT costs, added the Dallas-based airline. The balance is “USD18 million to USD24 million in previously expected revenue that would be lost or delayed, for at least three months, stalling implementation of certain revenue-generating projects.” That has to include its new reservations system that is keeping it from international expansion.

Both Mr Miller and ATA are right that the rule making falls short of economic justification but that has never stopped DOT in the past.

Since airlines have transferred some of these fees from the ticket price to stand-alone charges, they are no longer subject to the ticket tax imposed on each ticket sold. Given the billions being collected by the industry annually, Congress is eyeing those fees to increase government revenues, despite the fact it would require a change in the tax code to get their hands on it.

But they don’t know how big a pie they are talking about and that is what the new rule requiring more fees to be reported is undoubtedly designed to answer.

Tarmac rule another example of poorly thought out rules

Then there is the 18-month-old tarmac rule that, this summer, was expanded to include foreign carriers. The DOT likes to point out the rule has meant the elimination of three-hour-plus tarmac delays. However, it refuses to acknowledge cancellations have skyrocketed and, with substantially lower capacity, so has the time a passenger need to get to their destination.

In a public forum last February, US Airways Director of Operations Denis Barret gave fellow panel member DOT Assistant General Counsel for Aviation Enforcement and Proceedings Sam Podberesky the tally just for US Airways Express, according to Cranky Flier Brett Snyder who was also on the panel.

The regional operation was forced to return 927 aircraft to the gate, canceling 318 flights and inconveniencing 16,000 passengers. The downstream cancellations, because aircraft was out of position, impacted another 12,000 passengers. Of all those passengers returning to the gate only about 20 people did not continue with their flight plans.

Mr Podberesky only repeated how successful the tarmac rule has been. Meanwhile, DOT’s own statistical division, the Bureau of Transportation Statistics shows the impact of the rule confirming Mr Pdberesky’s contentions but also confirming more cancellations have occurred, something the department chooses to ignore.

Tarmac Times of More than 3 hours 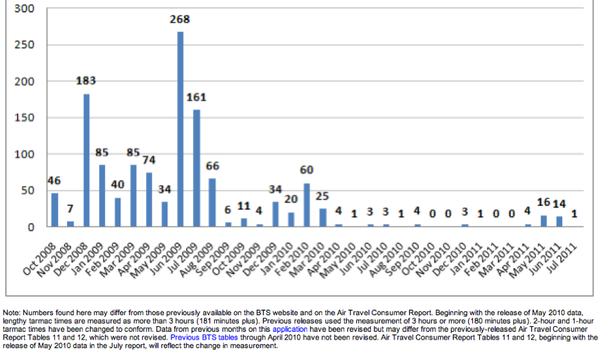 But, it also chronicled the change in cancellations, showing a dramatic increase considering airlines were fielding fewer flights. 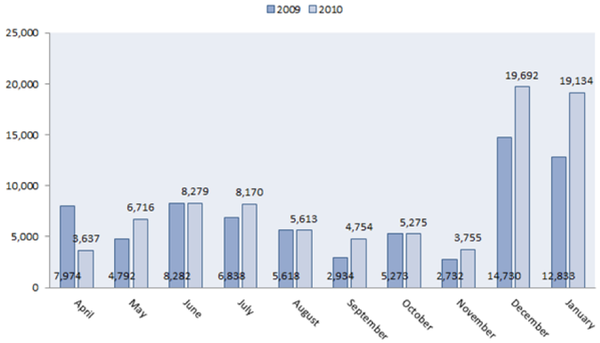 The department refused to acknowledge the increase in cancellations after independent analysts by AAI proved it and then proved it again with a report covering a longer period. Recently, DOT rejected similar findings by the General Accountability Office (GAO), concluding the rule has prompted a 24% increase in cancellations before departures and a 300% increase in flights after long taxi delays. In fact, GAO said the impact was far greater at rural, small- and medium-sized communities where passengers had fewer options with which to recover.

GAO found a greater likelihood of cancellations after the tarmac rule became effective.

Having done its original analysis in 2010, AAI hailed the GAO report saying it confirmed the group’s results the tarmac rule “unfairly penalises hundreds of thousands of consumers and must be replaced with a more sensible approach that does not cause flight cancellations to surge.” The group called for the abolition of the rule pending new protections.

GAO recommended further study of the issue especially the full costs and benefits of the rule, since current DOT statistics are inadequate. DOT responded that it would begin a study of the issue. Even so, it is highly doubtful it will change its mind with the current Secretary in place. Still AAI says its promises for more study is too little, too late as it asked for a complete investigation into its rule making process.

"In June 2011, we called for a congressional investigation into DOT's rule making related to the tarmac rule, including a review of DOT's faulty analysis and estimates,” said AAI. “While DOT continues to deny the connection between the three-hour rule and cancellations, the independent GAO report establishes beyond question that the rule harms consumers."

Given how mistaken DOT is between its estimated costs and effects of these new regulations, an investigation into its rule-making process is clearly long overdue. In its haste to be a friend to the consumer, DOT has clearly done more harm than good and is still at it with the rule collecting more data on fees.

One step forward, two steps back

The frustrating thing about all this is Washington’s understanding of the importance of aviation. The lobbying associations periodically come out saying they have finally made President Obama understand its importance, how it is an economic driver. The statistics, contributing USD1.2 trillion to the economy, driving 11 million airlines jobs and 12-15 non-airline jobs for every airline job, now seemed hackneyed for all the good they do.

After all it was the Obama Administration that proposed the rule makings and the new taxes and fees that has the entire aviation industry so upset.

Certainly, the Department of Transportation is not only not advising President Obama on the importance of the industry, it, too, is going after aviation in numerous ways. The fire power hired at ATA has not made much headway considering proposals to tax the industry and its passengers to reduce the deficit.

While Secretary Ray LaHood can point to the Future of Aviation Committee, there has been little resulting from that, meaning that it is just another study that is gathering dust just as the industry anticipated so long ago.

The Air Transport Association is calling for a National Airline Policy and it would be right but it is highly doubtful that this will work either. It is easily turned into a new study that is ignored just as all the previous ones were.

What is more distressing is that given statements by aviation industry groups they are making headway with the administration and Congress on how important the economic contribution of the aviation industry is to an economy in critical need of jobs, there is very little to show for it.