US Airlines are heading into 2020 with two big uncertainties – the timing of the Boeing 737 MAX’s return to service, and the country’s upcoming Presidential election, which at this point no one dares to predict.

Airlines operating the Max in the US have had to pull back the aircraft’s re-entry date many times as the US FAA takes great care in the process of recertifying the aircraft’s flight control software MCAS (Maneuvering Characteristics Augmentation System).

The ever growing uncertainty makes predicting overall US capacity growth in 2020 challenging, and that unpredictability is an overhang for investors somewhat nervous that capacity could outstrip demand.

The Presidential election creates another level of uncertainty as the unpredictable outcome can create some weakening of consumer sentiment. For now, US consumer perception remains strong, which bodes well for US airlines heading into the new year.

Mar-2020 will mark the one-year anniversary of the 737 MAX’s grounding. The idling of the worldwide fleet has wreaked havoc for the operators of the jets on many levels – upheaval in their schedules, cost pressure and lost revenue.

Both Southwest and American have been repeatedly forced to push back their planned time frames to relaunch 737 MAX service, and now are targeting Apr-2020 for the aircraft’s re-entry into service.

Delta Air Lines had “some benefit [from the MAX grounding], no question about it, in the year”, company CEO Ed Bastian recently said. However, he stressed that the grounding of the aircraft was not a big source of Delta’s projected seven percent rise in topline revenue for 2019, “…And I don’t think it’s going to be a material risk to us as we look into 2020 either”.

Since US MAX operators have had to pull back MAX schedules a couple of different times due to uncertainty over the aircraft’s recertification, Delta president Glen Hauenstein has said: “…We have a pretty good visibility as to where the MAX’s are going, and generally, they’re not going to places that are of key importance to us”.

There is likely to be some “flow pressure this summer as those planes come back, and depending on how they come back”, Mr Hauenstein said.

However, he stated that Delta was feeling confident that the aircraft were not to be operated in markets “that are going to impact our revenue streams directly”.

Southwest and American continue to navigate uncertainty over the MAX's return

Still, the uncertainty over the MAX’s return to service is leaving some investors jittery about an unsustainable rise of capacity in the US for 2020.

Southwest has said that it would have a deficit of 68 MAX aircraft by YE2019 – 34 grounded and 41 scheduled for delivery. At the end of 3Q2019 the airline calculated that once the MAX was approved for operations it would take 30 to 40 days to get the company’s manuals updated, and that it could manage the induction of about five to 10 aircraft per week, which would imply that it would take two to four months before all of its 2019 deliveries and prior MAX jets would return to service.

See related report: The depths of the 737 MAX crisis wears on Southwest Airlines

American, which has 24 MAX jets parked, has stated that it will have a phased in approach for the reintroduction of the aircraft. At the end of 3Q2019 the company’s executives explained that once the jets are cleared for service, the airline would begin with five aircraft flying within the first two weeks, which equates to 20 departures per day. Two weeks later, the airline would add 12 more aircraft, and the remaining seven would be phased into service after that period.

By YE2020 American had planned to take delivery of an additional 26 MAX jets for a total of 50 in its fleet. However, “while 10 of those 26 aircraft have been built, we don't know exactly when they'll be delivered or when the remainder will be built”, said American president CEO Robert Isom in Oct-2019. That was before Boeing decided to halt MAX production, beginning in Jan-2020.

Both Southwest and American have removed the MAX from their schedules through the beginning of Apr-2020.

Forward projections from CAPA and OAG show that there is some uptick in the US’s system ASKs through late May-2019, but that forecast could obviously change once the aircraft is recertified and airlines can firm up their planned return of the MAX into service. 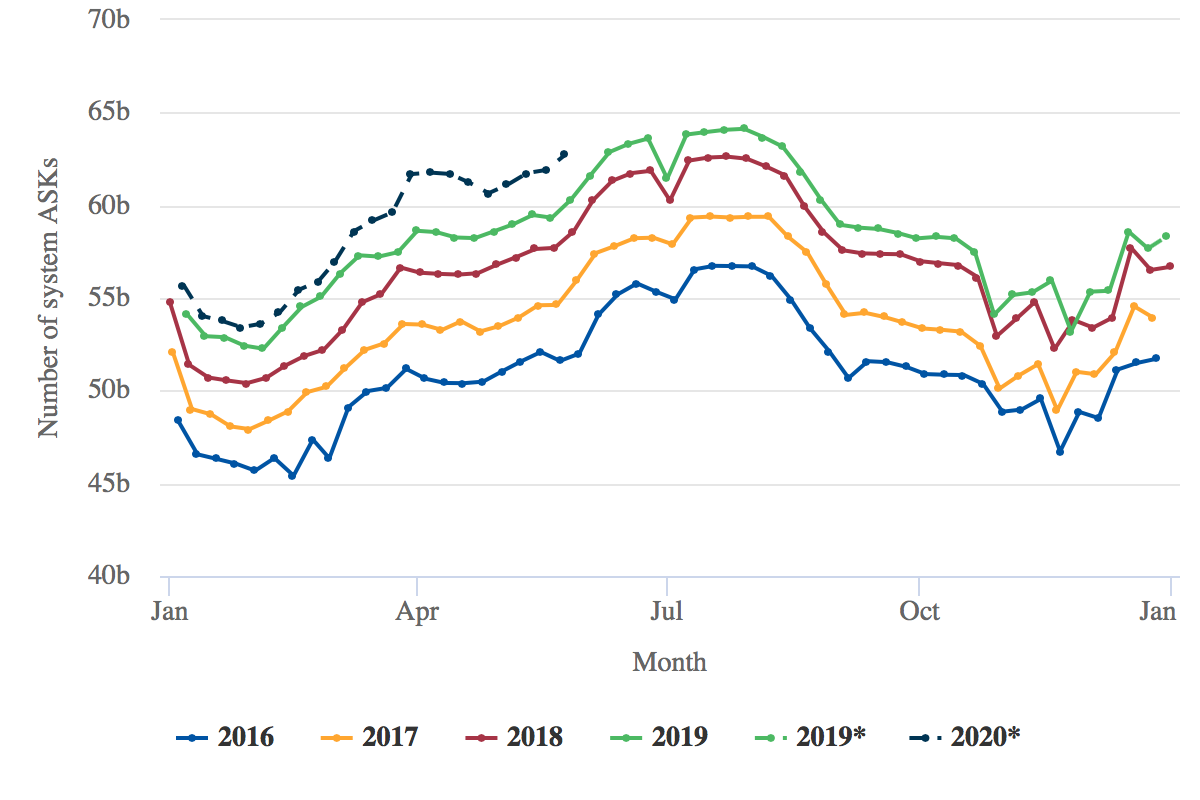 Delta has projected 4% to 6% topline revenue growth for 2020, “and all signs are the US consumer continues to be well”, Mr Bastian said.

However, he did highlight that 2020 is an election year, and the 2016 US presidential election did press on consumer sentiment a bit; that it “certainly weighed on business decisions as people were waiting to see with some clarity, what direction are the politics and our nation and our government was going”.

There are positive signs that, for now, consumer sentiment is holding steady. In Nov-2019 the US’ University of Michigan’s consumer sentiment index had been higher than 95 in 30 of the past 35 months, which was second only to the index’s reading of 100 or above for 34 out of 36 months from January 1998 to December 2000.

Markets were not spooked when the US House of Representatives impeached US President Donald Trump in mid-Dec-2019. That is likely driven in part by the US reaching an interim trade deal with China that would be a step towards ending the nearly two years of tariff tit for tat between the two countries. But it is unpredictable how the trade relationship will ultimately evolve in 2020.

The US market looks stable heading into 2020, but some uncertainty lingers

The eventual return of the Boeing 737 MAX into service and the outcome of the US Presidential election are significant events that could, or could not, impact the capacity-demand balance as 2020 unfolds.

At the end of 2019 US domestic demand remained strong; but the aforementioned unknowns could cast clouds of uncertainty over the market as 2020 unfolds.