US airline yields and profits benefit from tight demand-supply conditions

US airlines are continuing to benefit from relatively tight demand-supply conditions and the capacity caution is set to continue. The major US network airlines are now forecasting low single-digit capacity growth in FY2011, as high fuel prices and economic jitters pressure profits.

Capacity growth in Jul-2011 among the major US airlines was generally limited to single-digits. There were, however, a few carriers reporting double-digit growth, including JetBlue, Spirit Airlines and the smaller regional carriers. 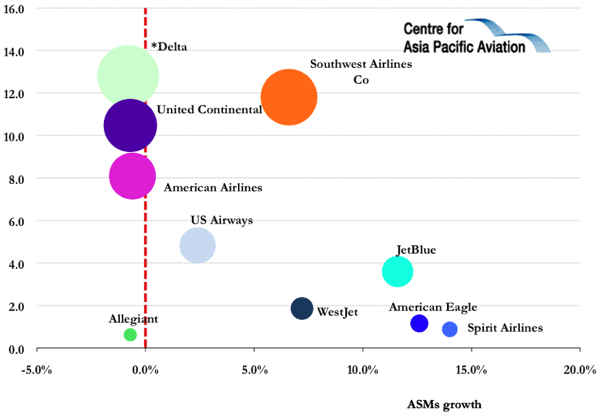 Different growth profile among network carriers and regionals and LCCs

Traffic (RPMs) growth among US carriers was generally limited in the single digits (with contractions at Delta and American) in Jul-2011, with the exception of Hawaiian Airlines (which grew 20%). Double-digit growth was reported by some regional carriers, such as Skywest Airlines and American Eagle, and at Spirit Airlines and JetBlue Airways in the LCC segment. (Spirit reported monthly traffic for the first time in Jul-2011. See Appendix for full list of Jul-2011 traffic results). 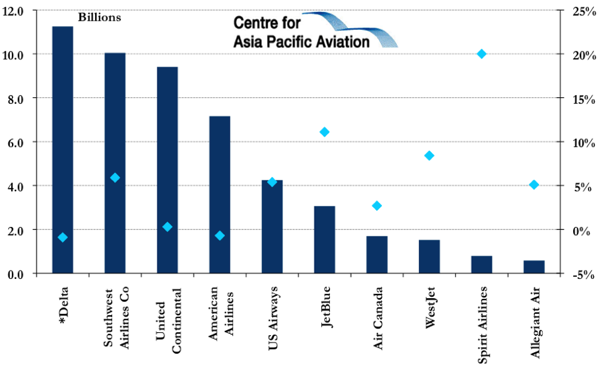 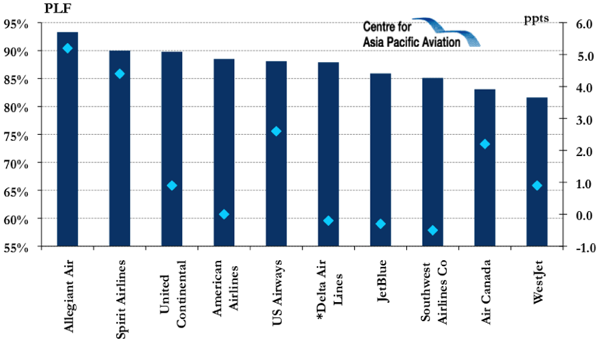 Unit revenue growth higher across the board

Unit passenger revenues were higher across the board in Jul-2011 among the carriers disclosing figures on a monthly basis.

Source: Centre for Asia Pacific Aviation & airline reports
^ Based on consolidated (mainline and Express) and also mainline figures compared to pro forma results from Jul-2010. United Continental stated consolidated PRASM increased by 4.8% and by 4.9% on a mainline basis.
~ Data excludes AirTran Airways
> TRASM growth of between 19.8% and 20.2% is anticipated. The carrier confirmed PRASM growth of 24.7% in Jun-2011 and TRASM growth of 18.9%

The Air Transport Association of America (ATA) reported that passenger revenue, based on a sample group of carriers, rose 8% in Jun-2011 to USD 15.57 cents per RPM, marking the 18th consecutive month of revenue growth. Systemwide passenger traffic (RPMs) rose 0.3% while yield rose by over 7% in the month with a regional breakdown as follows:

"While the overall rate of growth in air travel expenditures appears to be slowing, we are encouraged by continued strength in the Latin American and Caribbean markets. We hope to see ongoing revenue growth in July to begin the third quarter," said ATA Vice President and Chief Economist John Heimlich.

Mr Heimlich previously stated that ATA forecasts 1.5% more passengers will fly during the summer months, with the association “optimistic that strong international demand will help offset volatile fuel costs”. A continued recovery in passenger yields and unit revenues have occurred in 2011 linked to an improvement in high-fare business travel demand.

A profitable summer, but caution ahead

The nation’s airlines are generally expected to be profitable over summer 2011, with increased demand, high load factors and improved yields. However, continued high US unemployment and slumping retail sales could signal reduced demand for leisure travel, offsetting the strength in premium/business travel. Fare sales initiated this week by Southwest and AirTran covering the second half of the year indicate a need to stimulate demand.

Source: Centre for Asia Pacific Aviation & airline reports
^ Network carriers traffic figures based on domestic figures
~ AirTran Airways became a wholly owned subsidiary of Southwest Airlines on 02-May-2011. Passenger based on enplaned passenger data. Revenue passengers stood at 10.1 million in Jul-2011, marking a 0.4% year-on-year increase.
+ Based on US domestic data
* Based on domestic Mainline data
> Based on total system data
#  The substantial increases for each of the items are due primarily to the acquisition of ExpressJet Airlines on 12-Nov-2010
Alaska Air data includes Alaska Airlines and Horizon Air
Republic Airways data includes Chautauqua Airlines, Frontier Airlines, Lynx Aviation, Republic Airlines and Shuttle America
United Continental data includes United Airlines and Continental Airlines in addition to United Express, Continental Express and Continental Connection
Delta Air Lines data includes Delta and the Delta Connection
< The significant decline in capacity and traffic for Horizon from the prior year is due primarily to the completion of Horizon’s transition out of the CRJ-700 fleet. This transition was completed in June. Alaska is now contracting with SkyWest Airlines to provide regional jet flying in seven markets. Alaska Air Group (Alaska Airlines and Horizon Air) reported a significant increase in its bookings near the end of the month after Congress failed to reauthorize funding for the Federal Aviation Administration and certain transportation taxes and fees expired on 23-Jul-2011. Alaska and Horizon immediately passed these savings on to customers. In the first seven days after the expiration, new bookings for the two airlines increased 26% compared with the week before the expiration.