The US' major airlines suffered massive declines in market capitalisation yesterday, as bad news pervaded the wider market. The market seems to have realised that the prospect of a long term consumer demand decline will adversely affect airlines, despite the substantial reduction in oil prices and recent capacity reductions.

There may also previously have been some expectations of an airline industry bailout, as the Administration was supposedly considering a large injection of equity into failing General Motors. But Treasury Secretary, Henry Paulson, yesterday announced that allocated rescue funds from the USD700 billion allocated would not be used to help GM (although this did not necessarily rule out funding from another channel - and, if GM is still there when the new Democratic Administration is in place in Jan-09, such funding becomes much more likely).

Except for the scale of price reduction for US Airways and the other majors, the falls were mostly indiscriminate, with LCCs suffering too. Only Allegiant managed to achieve positive territory, with a 3.1% rise. 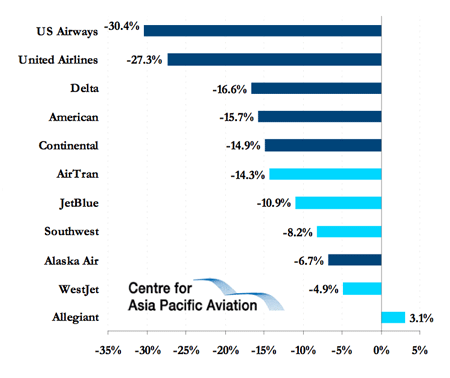