The three large US global network airlines are busy undertaking re-fleeting projects, taking advantage of favourable interest rates as they replace ageing aircraft in their mainline fleets. American and United in particular have touted favourable rates they have garnered in 2015 to fund a portion of their aircraft deliveries.

But each airline is taking a slightly different approach to mainline re-fleeting. American is focussed on adding new build aircraft to replace ageing MD-80s while United has tapped the used narrowbody market during 2015. The attractiveness of used aircraft obviously increases in a low fuel-cost environment, but those jets also become more attractive as deliveries of next generation narrowbodies drive down values of existing models.

Delta Air Lines has long adopted a philosophy of sourcing used narrowbodies, concluding that the lower ownership costs of those aircraft provide overall financial benefits. The airline is also taking delivery of new narrowbodies, but is opting to stick to current generation models, reflecting a conservative approach to hastily adopting new aircraft technologies.

As it continues the merger process with US Airways, American Airlines has the largest orderbook among the three large US global network airlines at 430 aircraft. Prior to the merger in 2011 legacy American placed a massive order for 460 Airbus and Boeing narrowbodies to replace its ageing fleet of MD-80s.

American, Delta and United mainline jets on order as of 2-Sep-2015

Source: CAPA Fleet Database
Note: *Orders include those placed directly by the operator and by lessors assigned to the operator, from 2-Sep-2015 onwards

American also plans the largest aircraft spend among the three US global network airlines in 2015 of USD5.4 billion in gross aircraft capex, of which USD2.5 billion will occur in 2H2015.

United Airlines has previously estimated that approximately two thirds of its total USD3 billion to USD3.2 billion capex spend in 2015 would be dedicated to aircraft financing. Delta, the most mature among the new consolidated US airlines, is forecasting roughly USD2.5 billion in overall capital expenditures for 2015.

American is taking advantage of favourable financing rates as it remains in the midst of a significant re-fleeting effort. During 1Q2015 the airline completed a USD500 million issuance of unsecured bonds priced at a rate of 4.625% and forged an enhanced equipment trust certificate (EETC) at a blended fix rate of 3.425%.

United has also secured favourable EETC financing during 2015, forging a transaction with a blended interest rate of 3.9%. Although none of the three large global network airlines are yet formally investment grade (only Southwest and Alaska Air Group hold that title), American, United and Delta have all been working to pare down their highest interest debt, which is no doubt improving their respective credit profiles.

Their respective de-levered balance sheets, along with fuel prices that appear to be remaining at historical lows at least for the short term, are creating opportunities to secure favourable financing rates for upcoming aircraft deliveries.

As it continues to shed MD-80 jets from its fleet, American is now boasting that it has the youngest fleet of any of the US network airlines. Among the three largest US global airlines, American’s average mainline fleet age is the lowest at 11.7 years.

Delta’s average fleet age is 17.1 years and United has an average mainline fleet age of 13.6 years.

American, Delta and United average fleet age of mainline jets as of 2-Sep-2015 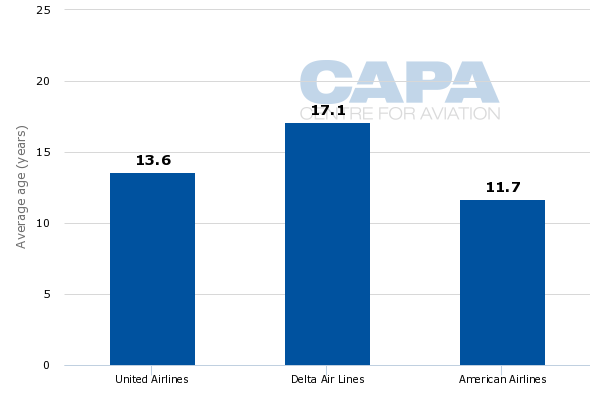 American is opting to replace its fleet with all new build aircraft, and does not appear to be tempted by the attractiveness of lower ownership costs of used aircraft.

But United is taking a different approach. During 2015 it has opted to sublease two Boeing 737-700s from Copa Airlines, and has also struck a deal with lessor AerCap to lease up to 25 Airbus A319 narrowbodies previously operated by China Southern Airlines.

United  plans to take delivery of 11 jets starting in 2016, and has options for 14 additional aircraft. United already operates 55 Airbus A319s, according to the CAPA Fleet Database.

As deliveries of the Airbus A320neo are scheduled to start in late 2015, values of existing current generation Airbus narrowbodies will obviously fall. Favourable leasing rates coupled with lower fuel prices (WTI crude was trading at USD45.35 per barrel as of 1-Sep-2015) are making used aircraft cheaper to airlines as they continue work to de-lever their balance sheets.

Delta has a long held strategy of operating used narrowbody jets from MD-90s to its more recent deal to add 88 Boeing 717s to its fleet that were previously operated by AirTran Airways. Southwest opted to shed 717s after acquiring AirTran in 2010. Delta was active in the used narrowbody market even when fuel costs were higher, concluding it could operate refurbished used jets at an overall lower costs.

Source: CAPA Fleet Database
Orders include those placed directly by the operator and by lessors assigned to the operator, from 2-Sep-2015 onwards

The orders for current generation new narrowbody aircraft reflect Delta’s strategy of acquiring a mix of used and new jets. However, the airline has yet to place an order for the A320neo family or Boeing 737 Max.

Its reasoning is likely twofold: as airlines rush to order more fuel efficient jets, prices for the current generation narrowbodies will fall, and Delta appears to have a preference for allowing other airlines to endure the teething pains of placing new aircraft into service.

Both American and United have opted to alter their widebody plans in 2015.

American is pushing back deliveries of five 787s scheduled for 2016. Three of the aircraft will be delivered in 2017 and one in 2018. American stated the deferrals would cut system widebody capacity by 2.5% and reduce its 2016 gross aircraft capital expenditures, which as stated above were much higher than its rivals in 2015.

United has also made changes to its 787 orderbook, opting to swap 10 787s for 10 777-300ER widebodies. The airline stated it could use the larger density 777s on higher capacity markets.

United is in the midst of a fleet-wide upgauging scheme that filters down to the 50-seat jets it is in the midst of shedding. The airline no doubt struck a favourable deal with Boeing, which now has freed up delivery slots in the Boeing 787 programme.

As it opted to change its 787 orders United also decided to keep and refurbish 11 Boeing 767-300ERs, which again was driven by lower fuel prices. United owns roughly 67% of its fleet, so holding onto older aircraft and refurbishing those jets is a more favourable economic decision as fuel costs remain low. 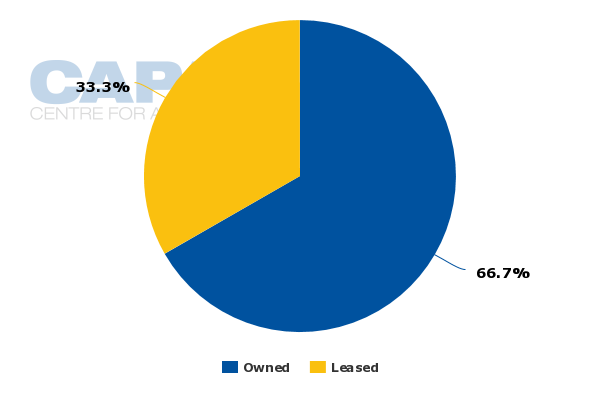 Although the A350 is a new design aircraft, it will have logged more than two years of service with other airlines by the time Delta takes delivery of its first jet, which should allow Delta to adhere to its general philosophy of allowing other airlines to suffer through the hiccups of a new aircraft’s entry into service.

The three US major global network airlines are each crafting fleet restructuring and fleet financing strategies that reflect the balance sheet repair they are still undertaking.

American is staying the course with its massive Airbus and Boeing orders while United seems to be taking a bet that fuel will remain below record highs for the foreseeable future by tapping the used aircraft market and opting to refurbish some widebodies to extend their operating cycles. Delta seems to be reaping the rewards of what some have deemed as an unconventional fleet strategy of capitalising on used aircraft and letting new aircraft technologies mature before committing to a new jet design.

Whatever strategy each individual airline is adopting, it is with an eye toward continuing to build balance sheet strength and maximising profitability.