The three large US global network airlines continue working to de-lever their balance sheets through both debt reduction and paying down high interest debt. The companies seek to prove to investors that they remain committed to achieving a similar performance to industrial grade companies, and sustaining those results.

American, Delta and United are all at varying stages of adjusting their debt to favourable levels, with Delta obviously being the furthest along given it was the first of the big three to complete a merger integration with Northwest years ago. American appears to be charting a course of paying down high interest debt, but also tapping favourable interest rates for debt financing. United concludes there is inherent shareholder value in de-levering its balance sheet.

Markets are taking some notice of the changes those airlines are making. American was recently named to the S&P 500 and Delta recently received some credit upgrades. But none of the large global US network airlines are admitting that their balance sheet clean up is incomplete as they work toward reducing their debt.

Delta has previously concluded that its interest expense at its USD4 billion adjusted net debt target would be approximately USD250 million annually compared with USD1.1 billion in 2009 when its adjusted net debt was USD17 billion. But the airline’s CFO Paul Jacobson at the end of 2014 admitted that a USD5 billion net adjusted debt level is still USD8 billion of adjusted debt “and it still has an interest expense burden that we need to chip away at”.

Between 2012 and 2014, Delta estimates that it paid down roughly USD4 billion of debt, and at the end of 2014 the airline stated that the debt reduction had led to three upgrades by S&P during the previous 18 months.

Delta is gaining some recognition for its debt reduction efforts. In mid Sep-2015 ratings agency Fitch upgraded the airline to BB+ from BB, citing debt reduction as one of the drives of the upgrade. The agency stated that it could further upgrade Delta if its debt/EBITA is maintained between 2.0x and 2.5x. Fitch calculated the ratio was 2.2x as of 30-Jun-2015.

As American continues its merger with US Airways, for now it is not offering any specific debt-to-equity ratios. “That’s not to suggest to the rating agencies or to our debt holders that we are not concerned about such things,” CEO Doug Parker has stated. He explained at this point in time, the proper course is to continuing borrowing at rates that are below 4% “and continue to lever, if you will...because we can generate higher returns than that for our shareholders”.

American’s goal is to ensure it is approaching debt reduction intelligently, said Mr Parker, “making sure that to the extent that we have the ability to borrow at rates below what we can earn or that we can return to you, we should continue to borrow irrespective of what that may do to some ratio”.

American explained that both of those credit facilities received a 25 basis point reduction in interest rates due to improved credit ratings the airline has received from S&P and Moody’s. The company estimates that it has paid down approximately USD3.6 billion of high cost debt since the close of the merger in late 2013.

At the end of 2Q2015, American had a very healthy USD11.5 billion liquidity balance (including USD629 million held in the Venezuelan VEF). The company regularly fields questions about how it intends to use its cash, and the airline is holding onto some of its cash balances to ensure a smooth merger integration. 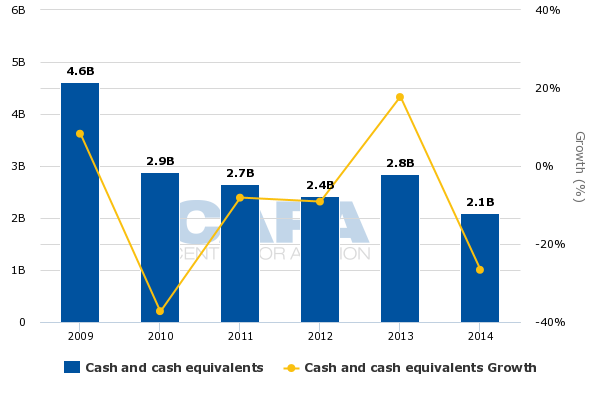 American recently outlined the priorities for its cash deployment including merger integration, product investment, paying down high cost debt and returning capital to shareholders. All airline investors have been pressing for enlarged returns, and American estimates that since the close of the merger it has repurchased USD2.5 billion in stock and issued USD280 million in dividends through 2Q2015.

United wipes its balance sheet clean of pre-payable debt, but continues to de-lever

United initiated its first round of shareholder returns since the merger with Continental in 2014 with a USD1 billion share buyback and followed up in Jul-2015 with a USD3 billion repurchase scheduled for completion by YE2017.

But it has no plans in the immediate future to issue a dividend. Former CEO John Rainey, who departed the airline in Aug-2015, remarked in early 2015 that there was value in de-levering United’s balance sheet, and that the company “was too heavily levered today, and it’s a vestige from an industry...we’re not operating in anymore”. 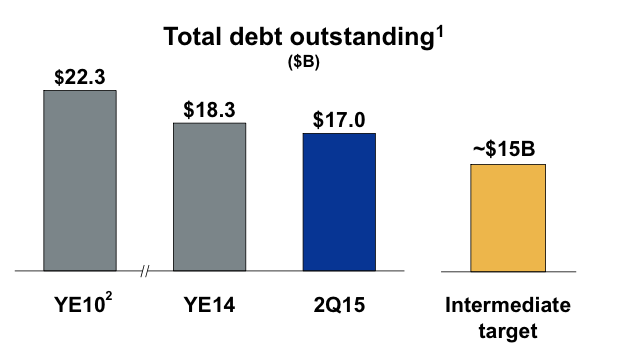 During 1Q2015 United made debt and capital lease payments of USD320 million that included debt prepayment of USD120 million. At that time the company also stated its intent to prepay USD600 million of notes carrying a 6% interest rate in 2Q2015. As of 30-Jun-2015 United had made USD920 million in debt payments for 1H2015. Also at the end of 2Q2015, United stated it had eliminated all pre-payable debt from its balance sheet.

The Big 3 take different paths to balance management, but investor rewards are a key focus

The Big 3 US airlines are taking nuanced approaches to their debt management, with Delta and United outlining clear cut targets for optimal debt levels. American, with the largest cash balance among the three airlines, seems to be willing to take on low interest debt after concluding it can generate returns in excess of those levels.

United is undergoing a high level management change with a new CEO, but for now it will likely stay the course and engage in further de-levering before joining American and Delta in issuing dividends. But each airline is working to manage their respective balance sheets with an eye to some level of shareholder returns, a trend that will not be disappearing anytime soon.