US airlines that operate all Airbus fleets or have order books dominated by the European airframer have been able to breathe a sigh of relief during the continuing turmoil triggered by the worldwide grounding of the Boeing 737 MAX – until recently.

As part of a years-long trade dispute over alleged subsidies provided to Airbus, the US has won authority to impose a 10% tariff on Airbus aircraft, which is creating uncertainty for US airlines that have deep order books for Airbus jets.

The short term solution is a huge push by those operators to take delivery of aircraft assembled at Airbus’ US assembly site in Mobile, Alabama. But ultimately the US and Europe need to reach an agreement that ensures airlines, and possibly consumers, do not bear the brunt of those tariffs.

The World Trade Organisation recently ruled that the US could impose USD7.5 billion in tariffs on certain European imports, including Airbus jets.

The organisation determined that Airbus did receive illegal subsidies, resulting in the new 10% tariffs on aircraft. The US has imposed 25% tariffs on other European goods, including whiskeys, wine, olives, and cheese.

Tariffs on aircraft took effect on 18-Oct-2019, and US operators are working to determine how the duties are going to affect their delivery streams.

CAPA’s fleet database shows that Airbus represents approximately 39% of US aircraft on order.

United States of America percentage of aircraft on order by manufacturer, as of early Nov-2019 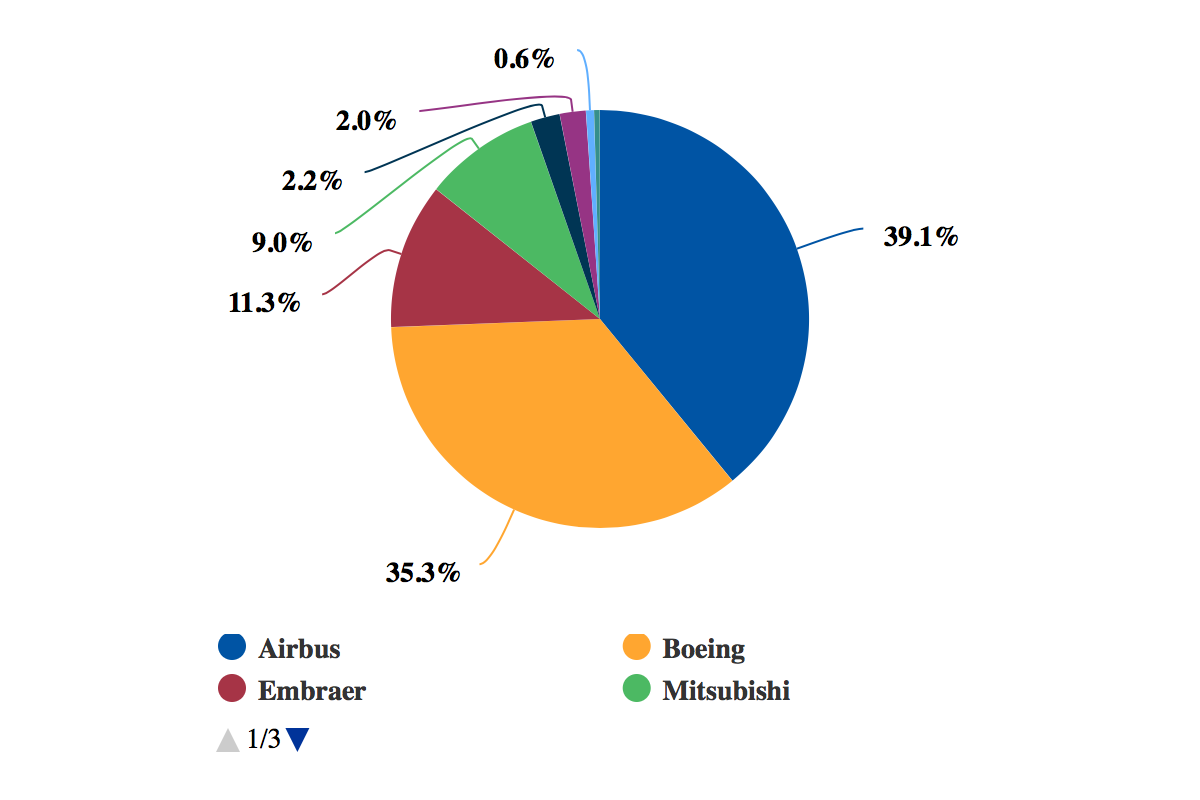 It appears that aircraft assembled at Airbus’ narrowbody production facility in Mobile would be exempt from the tariffs, and some operators have outlined the number of deliveries they expect from the site during the short term.

American Airlines has 111 Airbus jets on order, representing 43% of its total aircraft order book, according to CAPA’s Fleet Database. Company executives recently said that it would take delivery of nine Airbus narrowbodies built in Mobile through mid-2020, and six from Hamburg. There are an additional six that have not been assigned an assembly site.

Those 21 aircraft are scheduled for delivery during the next two years. “We’re doing everything we can to talk to Airbus to try to get them out of Mobile and make sure the aircraft come from that manufacturing facility instead of Hamburg”, American CFO Derek Kerr stated.

Spirit Airlines, which forged an MOU for 100 A320 family narrowbodies with Airbus after the tariffs were levied, recently stated that the remainder of its 2019 deliveries would be from Mobile, along with nine scheduled for delivery through mid-2020. In 1H2020 Spirit is taking delivery of two leased Airbus narrowbodies assembled in Hamburg.

Airbus jets make up nearly 97% of Delta Air Lines’ order book, and company CEO Ed Bastian recently said that: “…Mobile is going to be very important for us going forward … and yes, that’s going to be the focus of our domestic strategy, to be getting our [A]200s or [A]321s via Mobile..”

He acknowledged working to have jets delivered from Mobile does not help the airline avoid tariffs on Airbus widebodies (which are not manufactured in the US), “...but we’re evaluating options here. And as I said, our goal is to mitigate any potential tariff exposure”.

CAPA’s fleet database shows that Delta has 45 Airbus widebodies on order and obviously the tariffs on those jets would be higher than on narrowbodies, given the list price of twin aisle jets. According to CAPA data, Delta is scheduled to take delivery of five A330neos and two A350s in 2020.

Airlines caution against a tariff battle between the US and Europe

But Mobile does not have unlimited capacity, and at some point airlines need to find a longer term solution to avoid detrimental effects from the tariffs.

JetBlue, which has 153 Airbus jets on order, has expressed concerns that there are other complaints in front of the WTO. Those could lead the EU to issue tariffs “that go in their direction next year [2020]”, company CEO Robin Hayes recently stated.

Mr Hayes remarked that JetBlue believes the tariffs are extremely detrimental to the company and the airline industry as a whole.

“Our concern is about the way the tariff has been imposed, it was imposed on airplanes that have already been ordered”, said Mr Hayes. “Unlike many products, aircraft have a purchase cycle time that is years, in some cases, ahead of when they are taken.”

American Airlines is happy to work with Airbus to mitigate the impact of the new tariffs, “...but I don’t think you should assume that if it’s not mitigated, that American Airlines would be where it is borne”, company CEO Doug Parker recently said.

Mr Parker believes the answer to the trade spat is to keep from escalating the situation and levying tariffs on both sides.

“The answer to this is for the European Commission and the USTR [United States Trade Representative] to sit down and work this out in a way that doesn’t have tariffs…”, he said.

“But if they can’t do that, again, we are certain that the goal of the USTR was not to have these tariffs pad by US airlines and then passed on to the US citizens", Mr Parker added.

Escalating trade tensions between the US and Europe have broad repercussions

Trade spats are nothing new, especially skirmishes between Airbus and Boeing that have been a mainstay at the WTO for years.

But the tariffs issued by the US on certain European goods are occurring at a time when anxiety about the effects of the US-China trade dispute continues to grow, and if the Europe trade dispute develops further, the effects could spread beyond aircraft tariffs and create headwinds in the global economy.