Although US ULCCs Spirit and Frontier combined represent just 6% of the country’s domestic market share, their rapid growth during the last few years has changed market place dynamics in the US. The result of their proliferation is US majors segmenting their pricing structures to compete more effectively with low cost competitors, but also to improve their overall revenue management schemes.

The changes American, Delta and United have made in their pricing tiers have largely lived up to expectations. American and Delta have stated upsell rates from their Basic Economy offerings are roughly 50%, and believe segmented fares will drive billions in revenue improvement.

Now that fare segmentation is fully entrenched in the US market, the country’s major airline’s are focusing on maximising connectivity at their hubs to drive up yields and create a new line of defense against ULCCs in their hubs.

Even as US’ largest ULCCs Spirit and Frontier maintain small domestic market shares (3.3% for Spirit and 2.6% for Frontier), each airline charted more than 20% capacity growth in 2017.

At one point, Dallas/Fort Worth was a huge growth market for Spirit, but major competitive capacity increases and fare discounting a couple of years ago diminished DFW’s role in Spirit’s network. The airport is now Spirit’s ninth largest base measured by seat deployment. 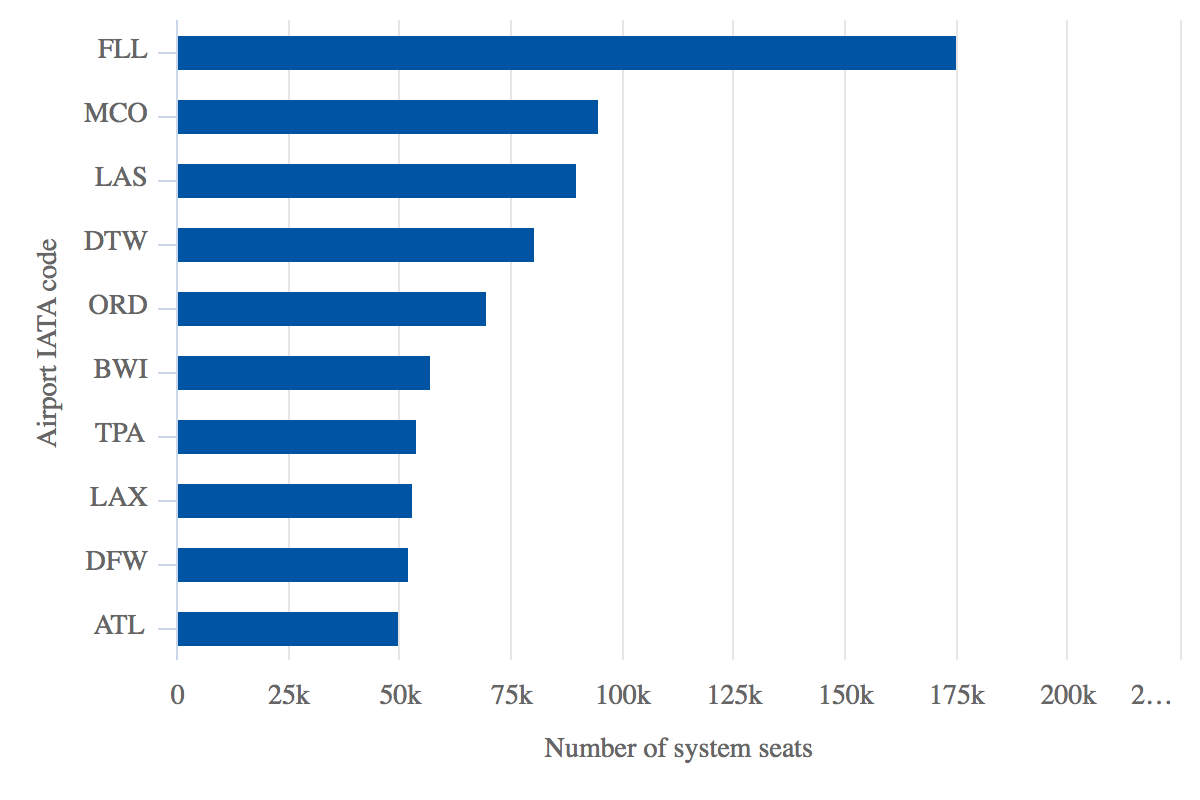 Orlando International’s prominence has grown in Spirit’s network, serving as the airline’s second largest base (measured by seat deployment), supporting the the company’s strategy of focusing on mid to long haul leisure routes. The airline has concluded Orlando is an airport where a low cost operator should always maintain a large presence.

One driver of Spirit’s pivot to more medium sized markets was pricing pressure in some of its larger markets, mostly by the large four US airlines – Southwest, American, Delta and United. Sprit’s planned new routes through Apr-2018 are a mix  of smaller and larger markets. The range includes a push from Columbus, Ohio to the leisure markets of Orlando, Los Vegas, Fort Myers, Tampa and Fort Lauderdale, and expansion from Detroit (Delta’s second largest hub by departing frequencies) to San Diego and Portland.

Although Spirit has maintained that new fare structures created by American, Delta and United are largely designed to firm up pricing in the US market, the US’ largest ULCC has been battling unit revenue degradation for about two years. Its total unit revenue fell 1.8% year-on-year in 2017, but the airline’s profits grew by roughly 59% to USD420.7 million, driven in part by improving trends in non-ticket revenue.

American and Delta posted solid passenger unit revenue results in 2017, with growth of 3.3% and 2.1%, respectively. Both airlines remain bullish on the upside of their product segmentation strategies, but their optimism is mainly driven by sales of their premium products. For example, Delta’s branded fare offerings, which include basic economy, generated USD200 million in incremental revenue during 4Q2017, with first class upsales and comfort plus revenues increasing 25% to 30% year-on-year. American has valued its basic and premium economy products at USD1 billion.

During 3Q2017, Spirit estimated that discounting had spread to roughly 50% of its revenue base, and at that time the airline stated it was prudent to start foucusing on higher loads rather than yields. By early 2018, Spirit concluded published fare structures had not changed materially since Oct-2017, but remarked the industry was exercising tighter inventory controls in peak periods.

Even as Spirit faces some continued discounting in its markets, the roll-out of basic economy by the US majors is not denting its profitability, for now. Spirit has a plan in place to play up its historical strength in growing non-ticket revenue and estimates its non-ticket revenue per passenger segment should reach USD55 in 2018 compared with USD53 in 2017 and a low of USD51.87 in 2016.

During 2017, United concluded that a push by ULCC Frontier to increase connections from its largest base in Denver was proof the ULCC model was not viable in the US. United offered that conclusion just as it was preparing to make a push from its domestic hubs in order to close the revenue gaps with its peers. United has spooked US market after stating it would grow 4% to 6% in 2018 to flesh out its domestic network.

Both United and American are working to maximise higher yielding connections from their hubs during 2018.  Recently, United executives explained that 15 to 20 years ago, Chicago to New York LaGuardia constituted a high yield market, but with the proliferation of low cost airlines, that is no longer the case. Both Spirit and Southwest serve the market (Spirit from O’Hare and Southwest from Midway,) alongside American, Delta and United. (O’Hare is a hub for American and United, Delta also operates its LaGuardia flights from O’Hare).

In the evolved environment, United concludes Chicago-Rochester, NY is an example higher yielding market; however, under its previous management the airline opted to shrink its domestic presence, taking smaller jets out of markets like Rochester and placing them in larger markets where American and Delta operated larger jets. The result is United lost customers. Now, United is attempting to make network adjustments in order to enlarge its base of higher yielding connecting passengers.

United also believes a higher percentage of connecting revenue in hub markets is an ample defense against low cost airlines. If a large hub and spoke airline can fill an aircraft with 80% connecting passengers, then discounters are left competing for 20% of the market, “and they cannot succeed in that environment”, the airline recently concluded.

United cited American’s hub in Charlotte, NC as an example, noting there are no low cost airlines in the market since the local passenger base is too small. Charlotte is American’s second largest hub by departing frequencies, and one of the airline’s most profitable hubs. 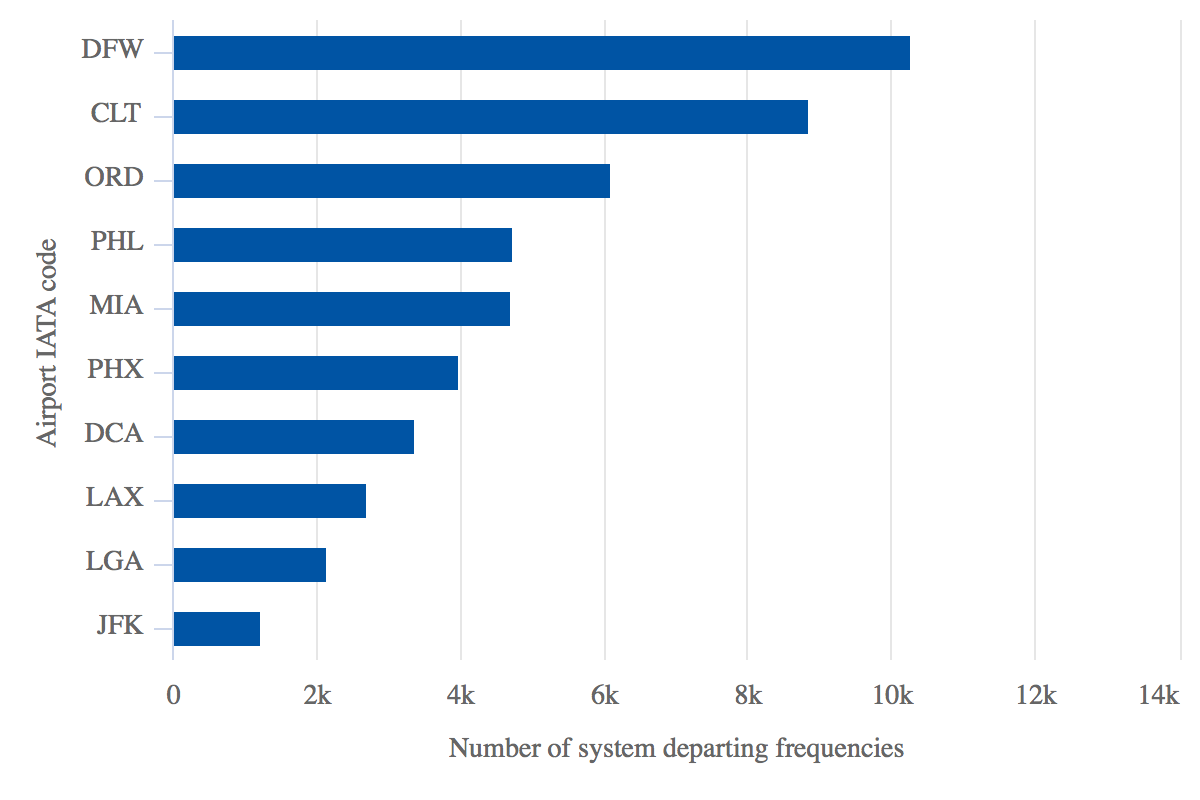 A part of American’s 2.5% planned capacity growth in 2018 the company intends to add service to smaller markets to bolster connections at its hubs. New routes in include Dallas to South Bend, Indiana, Dallas and Charlotte to Panama City, Florida and Dallas and Chicago to Missoula, Montana. American is also upping frequencies from its hubs to smaller markets in 2018 to improve its schedule and overall connectivity. The airline is also connecting some of its larger hubs to its historically stronger markets, citing Philadelphia to Oklahoma City as an example.

American believes growing at its hubs is a reflection of the maturity in the US market, which is comprised of three large hub airlines and smaller operators that “compete aggressively against each other”.

That conclusion is true to a point, but Spirit has no plans to completely stop competing against large US airlines, evidenced in its push from Seattle during 2018 to the large markets of Chicago O’Hare (served by Alaska, American, Delta and United) Dallas/Forth Worth (operated by Alaska and American) and Minneapolis/St Paul (also served by Alaska and Delta).

Undercurrents change in the mature US market. ULCCs remain a mainstay

In the past, both American and United have pledged to match fares offered by ultra low cost airlines in their hubs, and tiered pricing allows those airlines to better manage the level of inventory allotted to the lowest fare level, Basic Economy.

For now, it seems United, and to a degree, American are opting to maximising hub connectivity as a defense against ULCC growth in the US in addition to improving their pricing tiers to compete effectively without enduring too much revenue dilution.

Even as the US remains a mature market, there are changes underway as ULCCs find their equilibrium after the US majors have fully rolled out segmented fares and those large global network airlines attempt to hone in and fully exploit the hub and spoke model. The effects of those changes remain to be seen, but ULCCs have no intention of going away.

This topic is for discussion at CAPA's 2018 Americas Aviation Summit

All's fare in love and war: is aggressive pricing a new competitive reality?

Bankruptcy and subsequent consolidation have delivered the majors a low cost base and strong market positions, especially at their main hubs. But a combination of lower fuel prices and a resurgence of low price competition has created downward pressures on yields over the past year.

These may be recoverable, but there is a constant threat of ULCC entry on city pairs that have been lost as major airlines consolidated – a network phenomenon that occurred in Europe and Asia as LCCs have successfully gained dominant positions. Compared with other developed regions there is relatively lower connectedness for medium sized airports since consolidation.

As those airports (and their local economic interests) become more aggressive in their marketing activities, and as ULCCs expand, a new network and pricing dynamic will appear. Unlike their Asian and European full service peers - who are much more exposed to LCC pressures - US airlines have not resorted to establishing low cost subsidiaries. Instead they have used various pricing strategies on their mainline operations. To date this appears to have been successful. As low cost competition grows and the majors’ cost bases rise, this may call for new responses.