Urumqi has emerged as one of China’s fastest growing airports. Passenger traffic has nearly quadrupled over the past decade, from only 5.8 million in 2018 to 21.5 million in 2017. Traffic increased by 6% in 2017 and was up another 9% in the first seven months of 2018.

However, Urumqi is still relatively underserved from an international perspective, despite its strategic location on the Silk Road and only 300km from Kazakhstan. Urumqi is closer to Central Asia than eastern China and is within narrowbody range of several markets benefitting from China’s 'Belt and Road Initiative' (BRI). Urumqi also has a large Central Asian ethnic population and has become a hub for international companies seeking to increase their presence in Central Asia or the Silk Road Economic Belt.

China Southern has operated a hub at Urumqi for several years and currently links Urumqi with 15 international destinations – all of which are along the Silk Road. However, the China Southern hub consists predominantly of domestic services and 96% of Urumqi’s total seat capacity is in the domestic market. International traffic has declined over the past three years, whereas domestic traffic has grown rapidly.

The Belt and Road Initiative (BRI) and potential implications for aviation will be the topic of a panel at the CAPA Asia Aviation Summit in Singapore on 8-Nov-2018. For more information about the summit, including the agenda, click here.

China Southern’s Urumqi hub serves all seven destinations: Astana and Almaty in Kazakhstan; Bishkek in Kyrgyzstan; Dushanbe and Khudzhand in Tajikistan; Ashgabat in Turkmenistan; and Tashkent in Uzbekistan.

Urumqi currently accounts for 51% of total China-Central Asia capacity. Beijing accounts for another 47% and Xian the remaining 2%, according to CAPA and OAG data. Beijing caters to point-to-point traffic and Urumqi is the natural hub for traffic from anywhere else in China. Urumqi is ideally located for Central Asian traffic and has the domestic network (more than 50 destinations) to feed international services.

China Southern has filled some of the void in the Urumqi-Bishkek market by adding capacity. China Southern added a sixth weekly service to Bishkek in Jul-2018 and is further upgrading the route in late Oct-2018 with a seventh frequency, as well as upgauging all flights to the 737 MAX 8.

China Southern is also increasing capacity to Ashgabat, Dushanbe, Khudzhand and Tashkent at the end of Oct-2018 by upgauging all four Central Asia routes from 737-800s to 737 MAX 8s.

However, China Southern’s Urumqi-Central Asia capacity will still be reduced slightly on a year-over-year basis. Although Almaty and (soon) Bishek are served daily, Ashgabat and Khudzhand are only served once weekly, while Dushanbe and Tashkent are only served twice weekly and Astana thrice weekly.

The withdrawal of Air Kyrgyzstan and Air Manas highlights the challenges Central Asian airlines confront in competing with China Southern in the Urumqi market. Urumqi has significant local traffic to Central Asia as the city has a large Central Asian ethnic population and has close business ties with Central Asia (a legacy of the historical Silk Road trading route).

However, China Southern has a huge competitive advantage over Central Asian airlines because it is able to feed its Urumqi-Central Asia services with its huge domestic network. China Southern currently serves 37 domestic destinations in China from Urumqi.

China Southern also attracts some international connecting traffic on its Urumqi-Central Asian services. China Southern does not currently have any services from Urumqi to East Asia but is able to attract two-stop traffic from East Asia and North America via Guangzhou and Urumqi.

China Southern even attracts some traffic heading between Central Asian countries (as well from Central Asia to neighbouring countries such as Afghanistan, Azerbaijan and Pakistan), despite the backtracking, because of the lack of direct connections within the region.

China Southern is launching services from Urumqi to Bangkok on 28-Oct-2018. Bangkok will initially be served with three weekly 737 MAX 8 services and should generate more sixth freedom traffic for the Urumqi hub, since Bangkok is a popular destination for Central Asian residents.

Bangkok will be China Southern’s 16th year-round international destination from Urumqi. In addition to its operation to the seven previously mentioned Central Asian cities, China Southern currently operates from Urumqi to Dubai in the UAE; Moscow and Novosibirsk in Russia; Islamabad and Lahore in Pakistan; Baku in Azerbaijan; Tbilisi in Georgia and Tehran in Iran. These are also all Silk Road countries and most of them border Central Asia. (The 16 international destinations exclude Saint Petersburg in Russia and Taipei in Taiwan as these routes are only served on a seasonal basis.)

Urumqi’s economic links, cultural ties and proximity to Central Asia make it a logical hub for the region. Narrowbody aircraft can be used for all the markets in Central Asia and the CIS, which is ideal, given that they are generally thin low frequency markets. Of the 15 international destinations China Southern currently serves from Urumqi, only Almaty (and soon Bishkek) are served daily.

China Southern is the market leader in Urumqi

China Southern is by far the largest airline at Urumqi, accounting for more than 40% of total seat capacity. Hainan Airlines is the second largest airline, with a 10% share, followed by Tianjin Airlines with 8% and Urumqi Air with 6%.

Tianjin and Urumqi are both part of the Hainan Airlines Group. Urumqi is the third largest base (after Tianjin and Xian) for Tianjin Airlines, which follows a full-service airline model. Urumqi Air is a small Urumqi-based LCC, operating a fleet of only 16 aircraft.

China Southern dominates Urumqi’s international market, accounting for more than 70% of international seat capacity. Air Astana is by far the largest foreign airline in Urumqi and is the only foreign airline with at least seven weekly frequencies. Air Astana currently has five weekly services from Kazakhstan’s largest city Almaty and three weekly services from the capital Astana. During peak periods, Air Astana has a daily service from Almaty and up to six weekly frequencies from Astana. 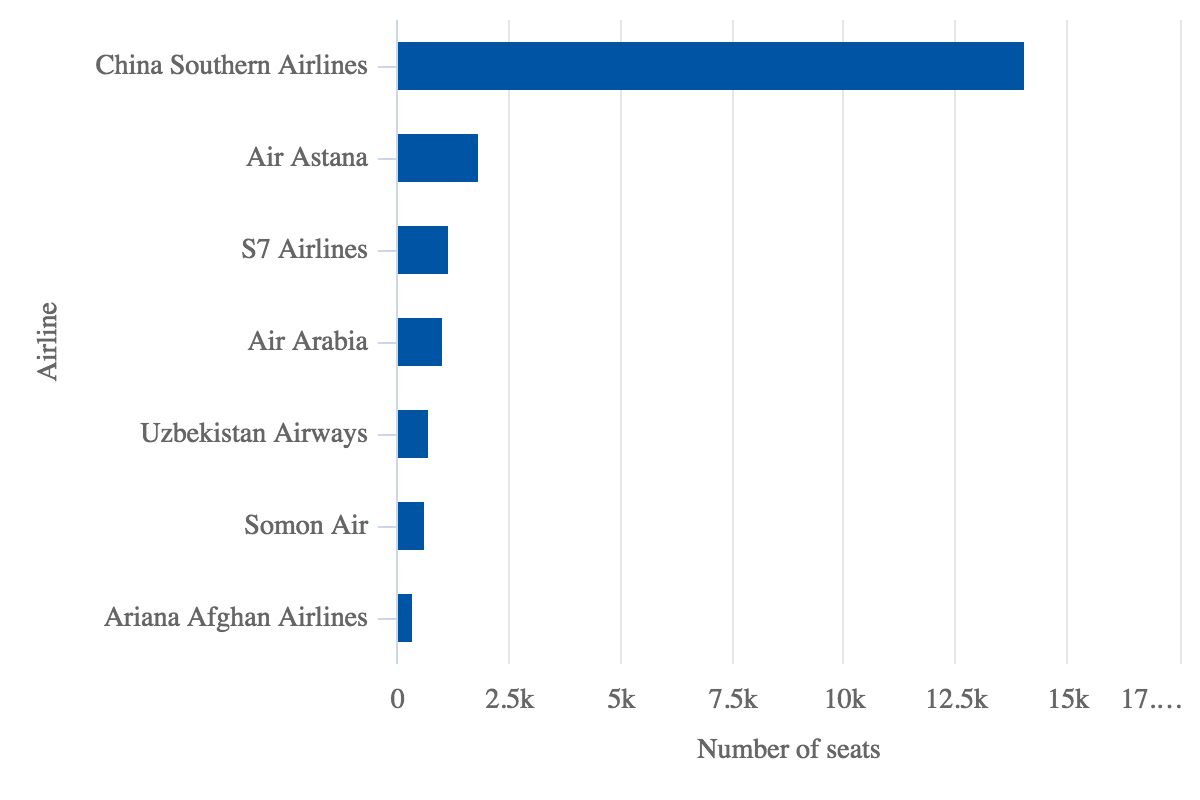 Ariana has just one weekly service to Urumqi. However, it is the only airline linking Urumqi with Kabul – or anywhere in Afghanistan, another Silk Road country and a member of the Central Asia Regional Economic Cooperation (CAREC).

China is also part of CAREC and Urumqi has links to 10 of the 11 other CAREC countries. (The exception is Mongolia, which could be linked to Urumqi in future, given that Urumqi is only 300km from the China-Mongolia border.)

As economic ties within CAREC and the Silk Road Economic Belt increase, driven by BRI, there should be opportunities to increase the number of international services at Urumqi.

Urumqi is already a hub for traffic to, from and within the region. However, all of the airport’s recent growth has been in the domestic market. 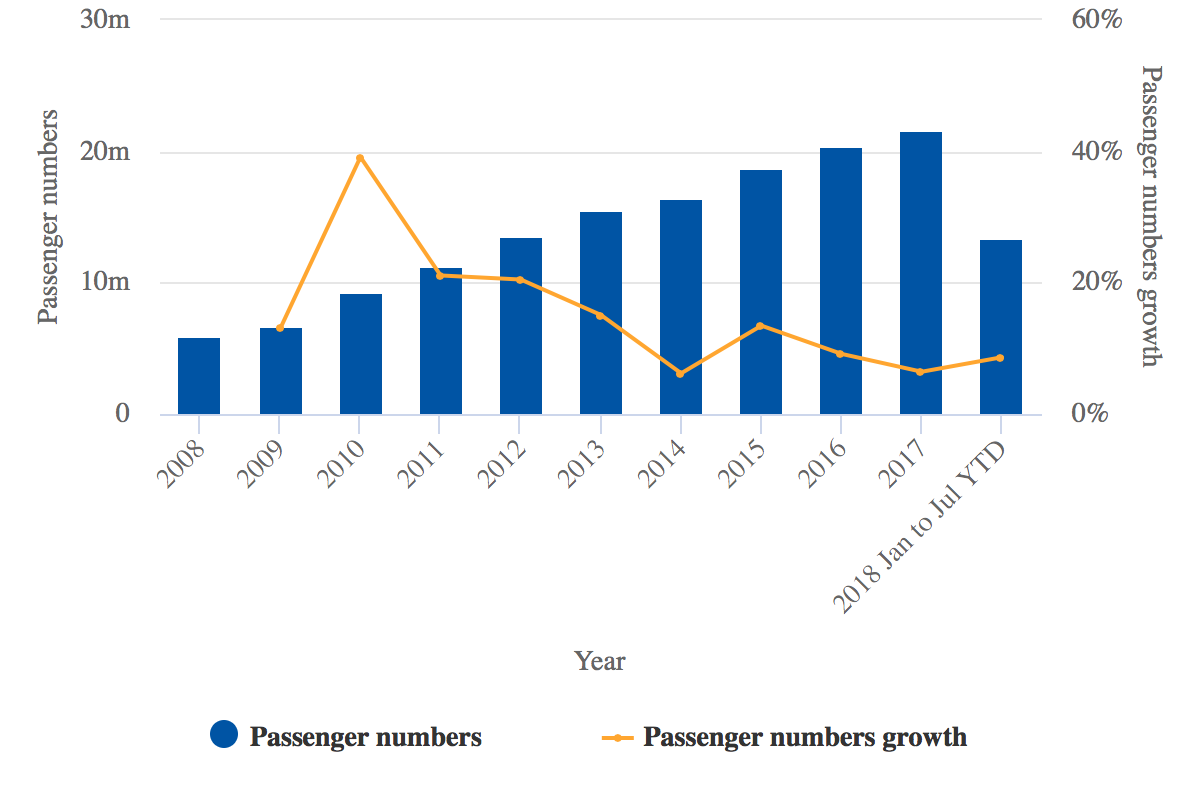 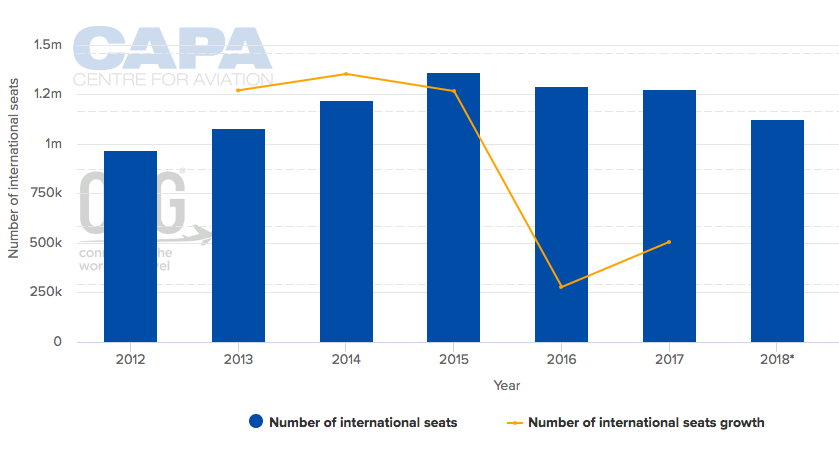 *2018 figure includes projected/scheduled capacity for last two and a half months of the year.
Source: CAPA – Centre for Aviation & OAG.

Urumqi should have a much larger international operation, considering its location along the Silk Road and at the door stop of Central Asia. If BRI starts to drive increased demand for air travel between China and Silk Road countries, Urumqi will obviously benefit.