Fuel prices may have retreated somewhat over the past two months, after closing in on USD80 per barrel in Jun-2009, but IATA reports that the generally upwards price trend this year is now of “great concern” to airlines. With yields still dropping (second quarter premium revenues fell by 41%, worse than the 33% decline in 1Q2009), the higher cost of fuel is now “increasingly squeezing airline cash flows”, according to the international airline trade body.

With air freight volumes apparently stabilising (at low levels) and some airlines retreating from the aggressive passenger capacity cuts seen over the first half of 2009, aviation fuel demand is set to increase in coming months, placing upward pressure on prices.

OAG this week revealed the world's airlines are showing marginal capacity growth in Aug-2009 - the first monthly increase since Sep-2008. According to OAG, the world’s airlines reported a 0.2% year-on-year growth in seat capacity this month. The low cost sector (which is particularly susceptible to fuel price rises) reported a 2% increase in capacity and frequencies for the month, accounting for 18.2% and 21.8% of total global frequencies and seat capacity, respectively.

OAG stated, “after a year of capacity cutbacks, it is encouraging to see positive numbers in the year on year comparisons. August is traditionally one of the busiest months for air travel, and it will be interesting to see if the steady upward trend we have seen since May continues once the Summer vacation season draws to a close”.

Aircraft fleets continue to grow, with older aircraft, grounded at the height of last year’s fuel crisis, now re-entering service in increasing numbers. According to IATA, there was a “significant increase” in the size of the international aircraft fleet in Jun-2009, with 124 new aircraft delivered and 68 previously grounded aircraft returned to service. 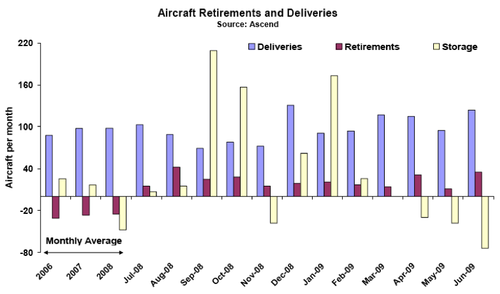 Oil prices cooled slightly over the past week, dropping below USD70 per barrel, after staying above USD70 over the previous week, although they spiked again overnight to above USD72.50 per barrel. 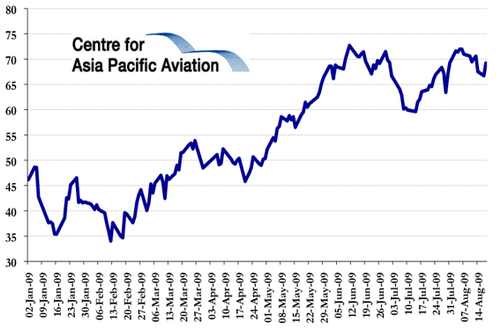 For the week, jet fuel spot prices fell by just under 2.0% on US markets. New York Harbor was down 1.6%, US Gulf Coast prices fell 1.8%, while Los Angeles prices dropped 1.9%. Prices were down just 0.8% in Amsterdam but Singapore fell 4.3%, although prices were volatile all week, with swings of more than ten cents. This follows from relatively stable prices over the previous week. 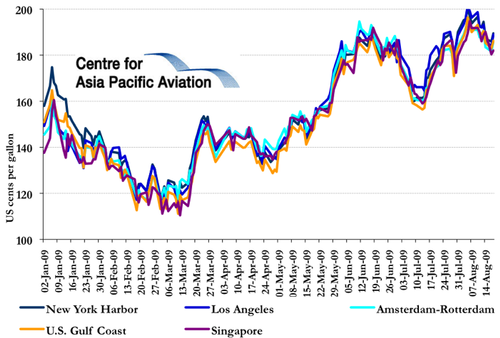