UPS believes now is the time to seize an opportunity to buy TNT Express to significantly bolster its competitive stance in Europe. UPS assures despite Europe’s shaky economic state, the continent is a growth vehicle for the company, and believes it can capitalise on TNT’s vast European road network. UPS also gains key access to the powerhouse of Brazil, and remains confident of TNT’s success in turning around its operations in the country.

The proposed USD6.8 billion purchase of TNT by UPS is the largest acquisition in its 105-year history, and pairs well the recent investments UPS has made in expanding its Worldport hub in Louisville, Kentucky; completing a USD200 million expansion project at is Cologne, Germany hub set for completion in 2013; the 2010 opening of its intra-Asia hub in Shenzhen and the 2008 opening of its Shanghai hub, UPS CEO Scott Davis tells investors. TNT Express’s air hub is located at Liege, Belgium.

Mr Davis concludes now is the time to acquire TNT after it split from TNT NV in 2011, describing UPS’ move as “pure play acquisition”. TNT rejected previous a USD6.4 billion offer made by UPS.

UPS projected revenues from its merger with TNT 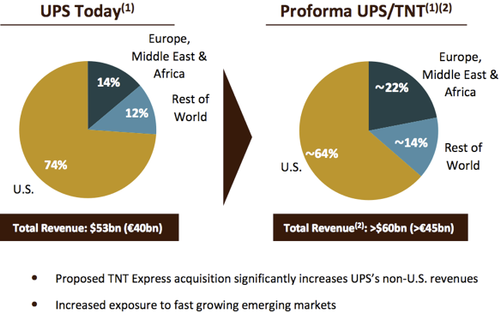 UPS estimates that Europe and the Middle East account for 63% of TNT’s revenues by geography, and calculates through the acquisition it will bolster its non-US revenues from 26% to 36%. It also combined revenues with TNT of EUR45 billion (USD60 billion). UPS in 2011 recorded revenue of USD53 billion, while rival FedEx recorded fiscal 2011 revenue of USD39.3 billion.

The acquisition allows UPS to pull ahead of FedEx in Europe, and positions UPS a strong second behind Deutsche Post, whose representatives were quoted in the local European press commenting the company expects anti-trust regulators to examine the deal closely.

Acknowledging the current concerns over the general economic state in Europe, UPS CFO Kurt Kuehn stresses the company is committed to investing in Europe. He believes Europe benefits from high export and cross border volume and “certainly their [Europe’s] proportion of exports exceeds that of the US”.

UPS also believes that its purchase of TNT would allow small and medium-sized companies improved access to global markets, as Mr Davis concludes most of the customers of those companies are outside of their own country.

UPS CEO Mr Davis in outlining the rationale behind the company’s pursuit of TNT says the acquisition expands its product portfolio, including road freight, which he describes as critical for the growth of UPS in the future.

Roughly 23% of TNT Express’ Europe revenues are derived from express road freight, says Mr Kuehn. “This is a vital and important part of their business and a real differentiator,” he stresses.

Many of UPS’ distribution customers in Europe and its freight forwarding customers need the TNT European road network, says UPS management, another key factor in gaining access to the TNT road network. 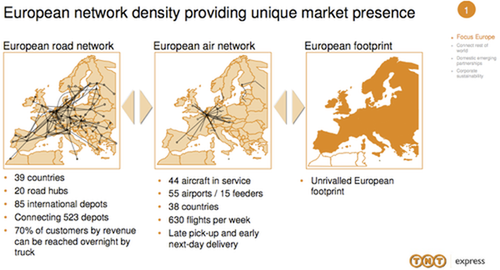 Another reason UPS finds TNT Express attractive is its investments, made during the last few years, in the emerging markets of Brazil, India and China through its acquisitions of Brazilian express delivery firm Mercurio, Chinese fright and parcel delivery firm Hoau and Indian express road company Speedage.

TNT’s performance in Brazil has lagged, and for fiscal 2011 the company posted a EUR125 million loss in its Americas operations that included a EUR104 million goodwill impairment related to its Brazilian operations. TNT’s 2011 operating loss in its Asia Pacific business was EUR33 million.

During its fourth quarter and full-year annual results presentation TNT said it would explore partnerships for its Brazil and China domestic operations, but it is not clear if that strategy will remain intact once the UPS acquisition of TNT is finalised.

UPS management remarks that “Brazil is a market we’ve been thinking about a long time”, and that TNT has “jumped in very deep”. UPS believes as a freestanding company TNT faced challenges in getting its business in Brazil off the ground. But UPS concludes it can bring strengthened financial capabilities to TNT to bolster its turnaround plan for Brazil, which TNT has previously said should be complete by year-end. UPS says it “supports that strategy”.

The strategy a combined UPS-TNT will chart in China remains unclear. UPS says it is in the process of waiting for a domestic licence from the Chinese Government. TNT purchased Hoau in 2007 and has stated it a prefers strategic partner in China. But UPS management states: “On the other hand TNT does have an express business in China as well as freight business, which coincide nicely with our strategy.”

UPS is warning its purchase of TNT for EUR9.50 per share will lower its returns in the short term, but “certainly by the time we complete the integration UPS will be back to achieving ROIC targets of 25%”, says Mr. Kuehn. The company also expects to spend an additional USD1 billion beyond the US6.8 billion purchase price to modify and expand facilities. UPS is funding the acquisition from its USD3 billion cash reserves and new debt arrangements.

UPS predicts a four-year integration timeframe after which it estimates annual cost synergies of EUR400-EUR500 million.

The companies will likely reveal more about the integration plan once they close the transaction, which they expect will happen during the third quarter. UPS envisions a three phased integration plan that starts with facility-by-facility planning with TNT, operating two networks and eventually melding the two operations into a single network.

UPS management is not revealing any potential divestitures it would be required to make to attain all the requisite regulatory approvals, but UPS says it expects swift approval from European authorities in “phase one”.

No indication on fleet plans

During its 2011 results discussion, TNT noted it aimed to reduce its fixed air capacity by 50%. Some of TNT’s aircraft are operated under ACMI contracts to other carriers.

Although there is not a lot of scope to the TNT fleet, UPS does believe it can optimise the combined fleet of the two companies on intra-Europe and intercontinental routes and increased efficiency in ground handling as part of the cost synergy target. 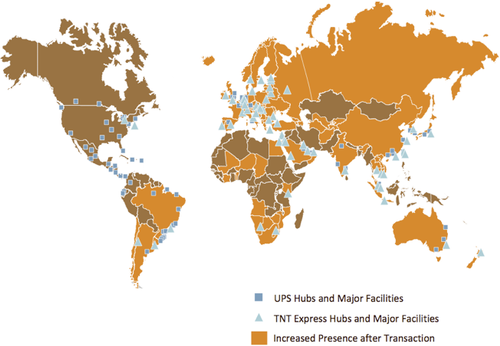