Forty years ago, the vast majority of international traffic to and from the US transited New York. Though that flow has since been spread across a plethora of hub cities, New York retains its position as the place where new entrants and established players must be present. As global air transport numbers rise, the aviation infrastructure in the New York City metro area is reaching its limits.

Recognising the vital role of aviation in building and keeping New York on top, the Regional Plan Association (RPA) has been engaged in looking at ways in which the area can continue to meet and absorb increased demand. On January 27, 2011, it released the results of research at a symposium held at the JP Morgan Chase Conference Centre in New York.

The mission of the Regional Plan Association

The RPA was established in 1922 and tasked with regional issues that affect a 31-county grouping that includes portions of New York, New Jersey and Connecticut. It looks at quality of life and economic concerns that resonate across the entire New York metro area and regions.

The executive report acknowledges that “the region’s status as a nexus for domestic and international air travel is intricately linked to its role as a premier center of global commerce”. But the group also recognises that the intense urbanisation and development in the region is a limiting factor in terms of expansion of existing facilities and the construction of new infrastructure.

The full report, an executive summary, as well as other links can be found at the RPA website.

One of the hallmarks of the group’s recommendations is the breadth of its inclusiveness. The RPA did not limit its “stakeholders” solely to aviation interests, but also included providers of surface transport as well as providers of alternative transportation. As a result, the report includes a broad spectrum of recommendations, some only tangential to airports and airlines.

The problems have been defined as the following:

The group also looked at six ways in which the goals might be achieved:

The bulk of the report focusses on the feasibility of each of the six options as well as the timeline required for implementation.

A perennial solution to ATC delays, the system(s) have been slow to emerge and become operational. The RPA does not expect full implementation of the first phase until 2018, with full operation not anticipated till 2025. By 2018 and the operation of phase one, the report foresees peak-hour capacity will have increased by 21 operations, less than a third of the required number. With phase two over a decade away, predictions are even more difficult to make.

In short, the RPA sees this initiative as a component of the overall fix but far from providing a comprehensive solution.

Again, this idea is seen as having some impact on the problem but the report’s authors are realistic in their assumptions. While expansion at the two locations could absorb some of the growth and act as relievers, the percentage of total passengers redirected by the effort would be small. However, the geographic locations of the two airports, Stewart in the Hudson Valley and MacArthur on Long Island, could reduce traffic to the major airports and ease the strain on the airport access infrastructure. Effect? Reduction of peak demand by about five flights.

According to research done, 15% of the trips from the NYC area airports are to destinations within a 500-mile radius. Increased and improved rail service has the potential to shift up to 2 million passengers to rail, reducing peak demand by 9 flights.

It was here that the constraints of the dense urbanisation of the region were most evident. There were no suitable sites available within a 40-mile radius of downtown Manhattan, a distance considered to be the outer limit for practical usage. Additionally, adding yet another major facility was deemed impractical given the already congested airspace around the region—even if the field were located on a man-made island, a la some Asian airports.

Various scenarios were investigated such as demanding larger aircraft, banning RJs and/or prohibiting air service to places within a give radius of the region. As has been seen in the past, any number of groups opposes some or all of these solutions and there is no guarantee that airlines, always competitive, would comply with such edicts. While perhaps a logical part of any plan, the RPA is skeptical of real, long-term benefit.

Seeing that some of the other recommendations have the ability to ease the problem, the group nonetheless believes that the core of any plan needs to center on the expansion of existing facilities. And, due to extraordinary constraints at LaGuardia, most of that change will have to be realised at JFK and EWR.

The recommendations involve substantial alterations to both runway configurations and terminal facilities. There are a number of possible alternatives at JFK but only one of the EWR plans stands out and it involves major renovations.

Of the four suggestions for JFK, three include land reclamation in Jamaica Bay, certain to bring environmentalists to the party, as well as displacement of things and folks on existing land. Two of the suggestions would increase the number of runways from the current four to five, and the other two would see six upon completion.

The Newark plan envisions the closure of the current crosswind runway and the addition of a third parallel 10,000 foot runway to the left of the current strips and requiring considerable reconstruction of terminal facilities. However, the plan, unlike JFK, would essentially only involve the existing airport footprint.

These are very big projects and, especially at JFK, face major opposition from numerous and powerful constituencies that will focus on the dislocation and presumed environment degradation that will occur.

Looking far ahead but planning now

The report also adds consideration of the effects of climate change, which could raise sea levels and impact all three facilities, recommending that the renovations include allowance for such developments.

In the short term—to about 2020 – the group recommends implementation of some innovations, like NextGen, but sees the primary task as one of intense planning and assessment.

The medium term of the 2020s needs to encompass widespread access-infrastructure improvements as well as the upgrading of alternatives such as rail and outlying airports.

Finally, the RPA pulls no punches in its overall verdict on the need for action. “By far the most significant finding of this analysis is the unequivocal need for airport expansion at JFK and EWR and that failure to implement these expansion plans by the 2030s, if not before, will have far-reaching and serious economic consequences.” This is not a statement that allows for much wiggle room. While acknowledging the complexity of the project and its very considerable expense, the group leave little doubt that inaction will certainly limit, and possible diminish, the importance of metro New York as we move deeper into the 21st century.

The report's final sentences, on page 158, sum up the anticipated benefits derived from purposeful action: “Taken together, the region’s airports can work as a world-class system, allowing its economy to remain strong, and affording its citizens the opportunity to travel the world for both business and pleasure. An effective working partnership among the Port Authority, the FAA, and the airlines will be necessary to turn these plans to reality, to the lasting benefit of the region.” 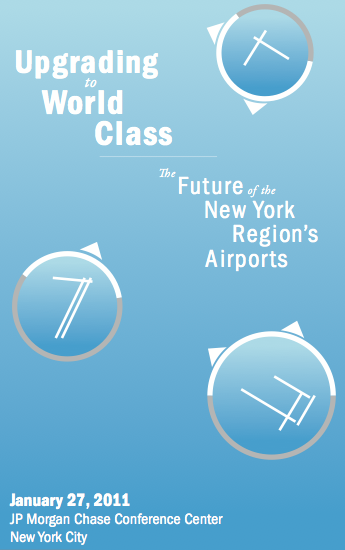