United and Continental up; USAPA expresses concerns with US Airways/Delta slot swap

Airline stocks rose on the back of news from IATA that international passenger traffic rose 0.5% year-on-year in Oct-2009. According to IATA, North American carriers saw significant growth in international traffic through the middle of 2009, with significant capacity cuts (-6.9%) across both the Atlantic and Pacific reducing passenger traffic 2.6% year-on-year in Oct-2009. North American carriers are expected to start releasing Oct-2009 traffic results this week, with Continental Airlines (+4.9%) traditionally the first to release results.

Latin American carriers meanwhile saw significant increases in the demand for air travel, growing 9% year-on-year for the month, compared to 3.4% in Sep-2009. The region’s carriers have continued to add capacity (ASMs), growing 3.7% year-on-year.

US Airline Pilots Association (USAPA) announced during trading that it is seeking a full investigation on the impact of a proposed slot, gate and facility transaction between US Airways (+6.3%) and Delta Air Lines (+3.5%) at New York’s LaGuardia and Washington’s Reagan National airports. In a letter to Christine Varney, Attorney General of the Department of Justice’s Antitrust Division, USAPA stated that this transaction may have serious antitrust concerns.

USAPA President, Mike Cleary, stated “we are extremely concerned about the market concentration that this transaction would create if it is allowed to be consummated. Those conditions raise the prospect of much higher fares and, if history repeats itself, a reduction in service to smaller communities. It also places a great burden on many of US Airways’ New York-based employees whose jobs will be eliminated and will cause financial harm to the New York City and tri-state economy. With all that is at stake, the transaction warrants a thorough review of the consequences of a deal that creates this level of market domination.”

Options traders purchased stocks in United Airlines (+7.0%) and Continental Airlines (+4.9%), due to forecast strength of carriers during the end of year holiday period and a decline in oil prices, according to the Wall Street Journal. According to Trade Alert, investors picked up 24,000 call options and 3,000 puts, due in Jan-2010 to purchase United stock at USD9.00.  Meanwhile, in Continental’s case, investors bought 10,000 calls and 5,000 puts, due to Dec-2009 calls. 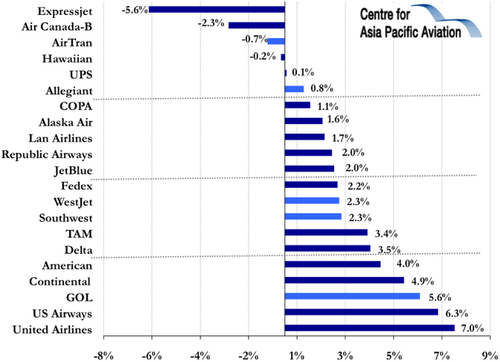