Japan's All Nippon Airways, United Airlines and Continental Airlines filed an application with the US Department of Transportation for antitrust immunity to enable the three carriers to create a "more efficient and comprehensive trans-Pacific network, generating substantial service and pricing benefits for consumers".

The trans-Pacific JV - the first of its kind between the US and Asia - would also enable United, ANA and Continental to compete more effectively with other global alliances, each of which has a significant presence in Tokyo. The move also increases pressure on Japan Airlines to get its house in order and select a strategic foreign partner (American or Delta) with whom to develop an alliance to counter ANA's progress.

China Eastern Airlines’ shares slipped 0.4%, as the carrier announced the completion of its a 1.35 billion A share issuance, resulting in proceeds of USD939 million. The majority of the new shares were acquired by state-backed CEA Holding (490 million) and China National Aviation Fuel Holding Co (210.5 million), increasing their ownership in the struggling carrier to 50.4% and 20.1%, respectively.

Shares in SpiceJet, Kingfisher and Jet Airways all gained yesterday, rising 8.5%, 3.0% and 1.7%, respectively, on increasing optimism of a sustained rebound in demand, stable ATF costs and improved yields and fleet utilization levels.

According to Karvy Stock Broking Ltd, “the aviation sector has become optimistic due to the improvement in load factors of various airlines in the current financial quarter of FY 2009-10. The aviation turbine fuel (ATF) cost has also stabilised at USD70-USD80 a barrel. Last year, the loads had dipped due to the recession and the sector had to take a hit in its topline.”

Emkay Global Financial Services added, “with the economy inching towards recovery, there is a sentiment that airline financials would also improve. Hence the stocks are gaining momentum on the BSE.”

Malaysia Airlines’ shares were down 0.7% yesterday, as the carrier’s stock was cut to ‘hold’ by Maybank. The carrier announced plans to raise approximately USD778 million, through the sale of 1,671 million new shares. 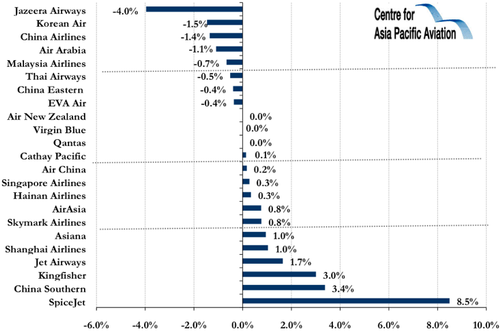