United Airlines: time to deliver as sceptics look for improved fortunes in 2Q2014

After turning a bleak performance in 1Q2014, executives at United Airlines are continuing their pledges of improvement, declaring year-over-year gains in quarterly earnings going forward with lofty earnings targets for 2017 and beyond.

United is also disclosing more details regarding its philosophy on debt management and shareholders returns, the latter of which is not likely to occur until 2015 at the earliest. Unlike some of its US airline peers, an investment grade rating does not appear to be the ultimate, near-term prize for United. Instead the airline has set a debt target that allows it to strike a balance between balance sheet management and shareholder returns.

The airline during the past couple of years has often made declarations of improvements in its fortunes, only to miss those targets. So any goals United outlines are understandably met with some level of scepticism.

But with overall demand in the US market remaining solid and United’s own ample opportunity for improvement, perhaps an upturn in 2Q2014 is a distinct possibility.

United aims for lower cost and higher revenues in 2H2014

United was one of two US carriers that posted a loss during 1Q2014, joining Hawaiian Airlines in recording a negative earnings performance. United’s losses including special items for the period were USD609 million, and its USD349 million operating loss reflects in part the airline’s lacklustre revenue performance it has exhibited for the better part of a year.

United is striking a positive note for 2H2014 as it expects unit costs excluding fuel during that time period to rise less than 1% and its revenue performance to improve as benefits from several revenue boosting initiatives should begin to bear fruit.

One of the drivers United has cited for its sub-par revenue performance relative to its US peers was selling out its inventory too quickly, which resulted in a lower volume of high yielding, close-in bookings and lost revenue. Previously management has explained that changes in United's revenue management system should improve its ratio of close-in bookings, resulting in a 0.5ppt improvement to 2Q2014 unit revenues, which United has forecasted to rise 1% to 3% year-on-year.

The airline is also restructuring premium cabin fares on US domestic and Latin American routes, carrier CEO Jeff Smisek recently stated. He explained most of the occupants in those seats are utilising upgrades, so the fare restructuring United has undertaken should bolster revenues and generate a higher paid load factor.

Achieving fare traction on certain markets to Asia is a more challenging proposition for United. Increases in industry capacity, particularly between the US and China, along with the depreciation of the yen have pressured United’s performance in Asia during the past year. During the five months ending May-2014 United’s traffic in its Pacific markets was essentially flat year-on-year on a roughly 2% rise in capacity. Its load factors in the region dropped 1.8ppt to 80.4%.

Data from CAPA and OAG show that for the week of 9-Jun-2014 United’s seat deployment to China is up 6% year-on-year, however; its seat share has fallen from nearly 33% to 29%.

Air China is bolstering its capacity by 38% for the same time period followed by Hainan at a 35% increase. China Eastern is growing its US-China seats on offer year-on-year by 18%. United’s US rivals American and Delta are also increasing their seat deployment by 26% and 27%, respectively.

United CFO John Rainey recently declared that United will no doubt continue to face competitive pressure in its Chinese markets. But he assures that Asia remains one of the “very best parts” of United’s network and the airline is posting favourable results in China.

Even as the competitive pressure on United’s routes to China continues unabated, the airline has declared it aims to grow earnings by 2x to 4x by 2017 in addition to achieving USD2 billion in annual cost savings during that same time period. Factoring in special charges, United’s FY2013 net income was USD571 million. Using FY2013 as a baseline, United should record at least USD1 billion in profits by 2017.

The obvious question is, are those targets achievable? United has continually argued that the challenges prohibiting the carrier from performing at a similar level to its peers are not structural, rather the obstacles stem from lingering inefficiencies from the United-Continental merger. Now executives believe that shoring up revenue, improving network efficiency and a fleet revamp should make those targets a reality.

One of the significant fleet changes underway at United is the introduction of higher capacity 76-seat regional jets. The pilots at legacy Continental had a strict scope clause in their contract that capped regional jet capacity at 50 seats. With the joint collective bargaining agreement United management negotiated with the enlarged pilot group, the carrier gained some leeway in optimising larger regional jets.

Between 2014 and 2015 United is introducing 70 76-seat Embraer 175s, which the carrier estimates provide a 10% gain in fuel efficiency compared with 50-seat jets. The airline estimates more than 100 of its 50-seat jets are scheduled to come off contract by YE2015.

United also aims to introduce 52 Boeing 737-900ER jets in the 2014 to 2015 time period, and believes those newer aircraft are 15% more fuel efficient that the 757-200s the airline operates on US domestic routes, and estimates the newer aircraft should produce USD2 million in annual savings.

United Airlines' mainline and regional fleet as of Apr-2014 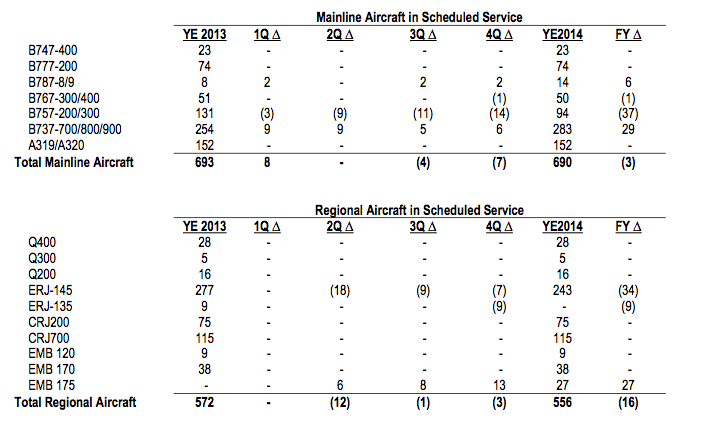 Despite its weaker performance during the past couple of years, United continues to field questions about shareholder rewards as the US airline industry collectively improves its fortunes. United estimates that airline stocks have outperformed the Dow Jones industrial average by roughly 160% since 2009, and that its own performance is about 300% better than industrial stocks during that period of time.

US airline stock performance vs Dow Jones Industrials: Jan-2009 to May-2014

Mr Rainey remarked that shareholder returns is something United is more likely to consider in 2015; but that does not preclude the carrier from possibly pursuing a stock repurchase or a dividend issuance in 2014.

But at the same time United still has considerable balance sheet clean-up underway. After paying down USD10 billion in debt during the last four years, United has a bit less than USD19 billion in gross debt including capitalised aircraft operating leases.

Achieving a USD15 billion debt level for a company the size of United, said Mr Rainey, results in the “marginal value of each dollar spent paying down debt is less and less”, and the airline does not see incremental value in delivering past that debt benchmark. At that level any excess free cash flow is best balanced between paying down debt and other obligations, including returns to shareholders.

United needs to deliver on its promises now more than ever

As the industry draws near to the end of 2Q2014, the stakes are high for United as its poor performance in 1Q2014 has investors watching keenly for any signs of a turnaround in the airline’s fortunes. For the moment its management is saying all the right things; but as United’s recent performance clearly indicates, declaring ambitious targets is no guarantee of delivering on those goals.

If United fails to produce improvements during the summer high season, its shareholders may opt to cash out - instead of enjoying cashing in on returns.