The majority of North and South American carriers made modest gains on Wednesday (27-Jan-2010), as the wider market moved into positive territory in the last 30 minutes of trading, after the US Federal Reserve announced they would keep interest rates near zero, ahead of President Obama’s State of the Union address after trading. As a result, the Dow (+0.4%) was up, as was the AMEX Airline Index (+0.2%), which was also assisted by a fall in oil prices (-1.4%), to USD73.67.

CEO and Chairman, Glenn Tilton, attributed the improved results to its tighter cost control, stating this, in addition to improved liquidity, will allow United to continue to improve its competitive position. CFO, Kathryn Mikells, stated improvements in Business and Premium demand are assisting the carrier “on the road to closing the profitability gap”. However, COO, John Tague, stated the carrier, as well as the rest of the airline industry, still has a “long way to go before we achieve a full recovery”.

AirTran (+1.5%) meanwhile gained after it reported a net profit of USD17.1 million (compared to a loss of USD122 million in the previous corresponding period), to become one of only a handful of carriers to report a profit in every quarter of 2009.

For the full year, AirTran’s net profit of USD134.7 million, operating profit of USD177 million and load factor of 79.8% represented record results for the carrier.

US Airways expected to post net loss of USD83.9 million

US Airways (-3.8%) meanwhile made the largest fall on Wednesday, ahead of reporting its 4Q2009 and FY2009 financial results tomorrow. According to a poll by Reuters, analysts on average expect the carrier to report a loss of approximately USD83.9 million for 4Q2009, or USD0.50 cents per share, on revenue of USD2.59 billion. 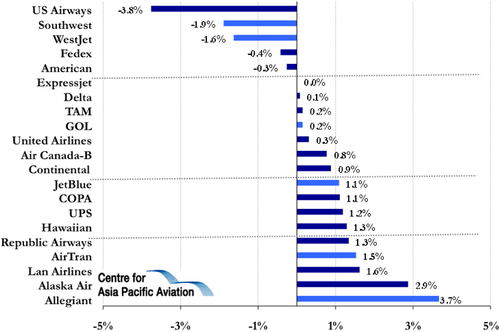