United Airlines continues a trajectory of improved fundamentals as changes undertaken in 2014 to shore up revenue that include re-banking and seasonal adjustments reach a full scale in 2015.

The airline sustained profitability for 4Q2014 and CY2014, and plans to keep its capacity growth at rates less than GDP despite the sharp decline in oil prices that has continued into 2015. Similar to rival Delta, United plans to use any extra cash generated from lower energy costs to accelerate balance sheet delivery and increase shareholder returns.

After enjoying a solid performance in its domestic entity throughout much of 2014, United observed some softness in the US domestic market near the end of 4Q2014 that is lingering into the beginning of 2015. The slowing US demand and several other factors are driving projected flat unit revenue growth for United in 1Q2015, but capacity discipline along with a favourable cost performance should help blunt some of the anticipated revenue pressure.

United continues to post profits and drives down top-line expenses 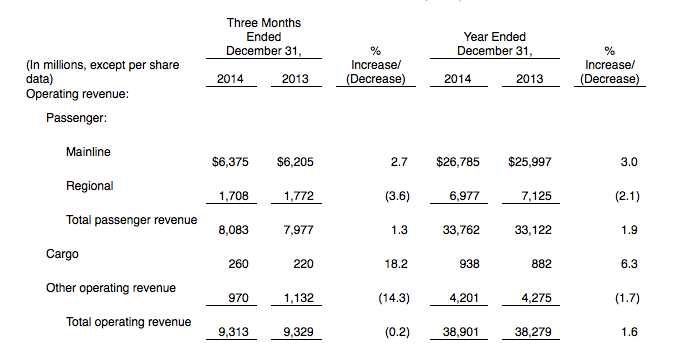 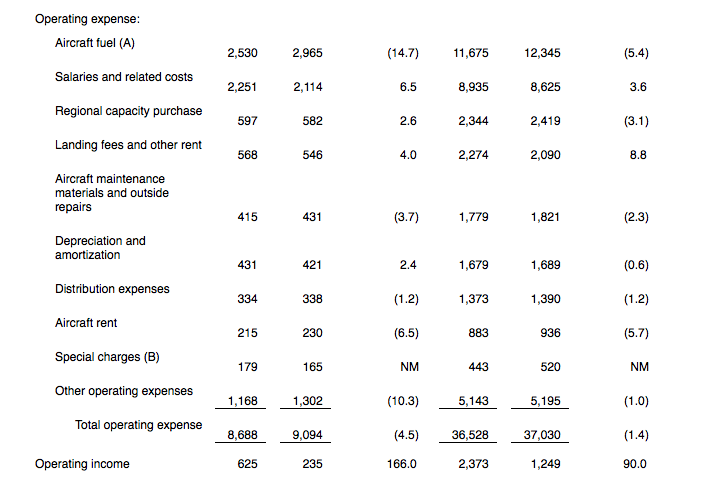 On a unit basis, United’s revenue per available seat mile inched up just 0.4% year-on-year in 4Q2014, which was in line with previous guidance issued by the airline of a 1% rise to a 1% decline. Previously, United has explained that it had a 1.5ppt revenue advantage in 4Q2013 stemming from the reconciliation of some interline ticket sales.

During a recent discussion with analysts and investors, United did not discuss its performance by geographical entity in much detail, but warned at the end of 3Q2014 that it was bracing for a 20% increase in competitive capacity on Pacific routes in 4Q2014, and currency pressure from the devaluation of the JPY would create a 1.5% headwind in United’s consolidated passenger unit revenues in 4Q2014.

United also at the end of 3Q2014 stated its capacity on Latin American routes increased in the double digits. The airline explained it was opportunistically re-deploying marginal capacity from elsewhere in its network, and acknowledged the capacity push would create unit revenue pressure in 4Q2014, but would be profit maximising for its overall network. United’s capacity to Latin America jumped 16.4% year-on-year during 4Q2014 while unit revenues declined 4.4% and yield fell 3.8%.

The region was United’s best performing entity during the quarter, as yield increased 6.1% and unit revenues grew 6.9% on a 2.2% capacity reduction.

United sees decent corporate growth, but could see some fall off in energy sector travel

Other revenue enhancing changes United launched during 2014 included the rebanking of its hubs in Denver and Houston during 4Q2014. Mr Compton remarked that United increased both the number of connecting passengers in those markets and increased yields.

United’s corporate revenues increased 4% year-on-year during 4Q2014 driven by gains in the healthcare and technology sectors.

Mr Compton stated that United is “monitoring the impact of lower oil prices on our energy related corporate traffic”, and during 4Q2014 “we noticed a small impact and we are working closely with these corporate partners as they begin planning travel for 2015”.

The oil industry is a significant driver of the economy in Houston, which is United’s top base measured by seat deployment for the week of 19-Jan-2015 to 25-Jan-2015. 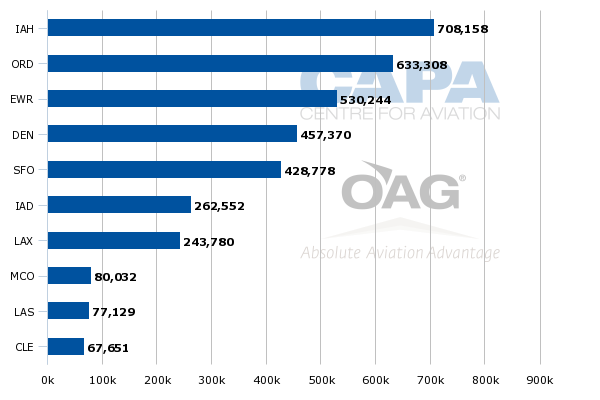 Similar to all US global network airlines, United is working to shrink its 50-seat jet operations. During 2014 it removed 39 50-seat jets from its regional fleet and added 33 Embraer 175 with 76 seats. While the longer stage lengths of those aircraft do create some unit revenue pressure, United estimates that ancillary revenue per passenger is 15% higher on the larger gauge regional aircraft due to a configuration that includes 12 first class seats and 16 seats with extra legroom. During 2015 United estimates adding 49 Embraer 175s as 71 50-seat aircraft exit operations.

The increased gauge of its regional fleet and United’s overall frequency consolidation that started in 2014 resulted in a 4% increase in gauge in 4Q2014 and 6% drop in departures. It estimates in 2015 its system departures will fall 4% as aircraft gauge increases by 6%.  United is also adding slimline seats on roughly 300 aircraft, with 85% of the project targeted for completion in 2015. The higher density configurations created by the slimline seats is also contributing to the increased gauge. 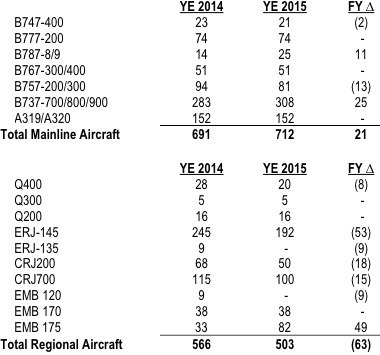 United is predicting a range of consolidated passenger unit revenue growth in 1Q2015 of down 1% to a rise of 1%. The airline concludes several factors are affecting its revenue performance for the first three months of 2015.

A shift in revenue redemption tickets in United’s frequent flyer programme is impacting 1Q2015 PRASM by roughly 1ppt. The airline is now recognising passenger revenue in the period that a passenger redeems travel. Mr Compton noted it does not change United’s full year revenue outlook, but will provide a headwind of approximately USD75 million during the quarter. During 3Q2015 and 4Q2015, United expects the redemption changes to result in revenue benefits of USD50 million and USD25 million.

United projects its average stage length will increase 1.5% in 1Q2015, driven largely by a Pacific network restructuring that focuses on more direct flights by United to Asia rather than making connections through Japan. During the last year United has cut service from Tokyo Narita to Hong Kong and Bangkok. It is working with its Star Alliance joint venture partner ANA to offer connections that allow United to redeploy aircraft on other long-haul flights from the US, reflected in its introduction of long-haul flights from San Francisco to Taipei and Chengdu and between Los Angeles and Melbourne. The airline believes all the network changes are margin accretive, but will negatively impact PRASM by 0.5ppt in 1Q2015.

Like its rival Delta, United is also expecting headwinds from the strengthening of the USD. It has opted to hedge 60% of its exposure to the EUR in 2015 at a rate of USD1.22, and estimates that foreign exchange challenges will negatively effect 1Q2015 passenger unit revenues by 1ppt.

United is noticing signs of a softening in domestic demand

But unlike Delta, United at the end of 4Q2014 noticed some signs of softness in the US domestic market. “We expect this to continue in the first quarter of 2015 with domestic unit revenues expected to be flat to up 2%,” Mr Compton said. Some of the domestic revenue headwinds United expects in 1Q2015 should be offset by a 1.5ppt gain “as we don’t anticipate the same bubble of weather related disruption to our operation that we experienced in the first quarter of 2014”. Mr Compton stated.

United expects its domestic capacity in 1Q2015 to be flat to down 1%, and Delta has also outlined plans to cut 1.5ppt of its domestic schedule beginning in Mar-2015.

Offering some detail regarding the US domestic environment in late 2014, Mr Compton explained that combining Nov-2014 and Dec-2014 and factoring out the “holiday movements and things like that”, during those two months growth rates for United and the industry “were less than the previous months during the year and we want to highlight that as a base”.

United executives did not specifically comment on pricing pressure spurred by lower fuel prices, but Spirit Airlines in late 2014 cited some pressure on close in bookings from industry pricing actions and Delta Air Lines recently concluded that as fuel prices fall there can be expectations of broad based pricing pressure.

United aims to use any fuel windfall to accelerate share buybacks

United does have the benefit of a favourable cost performance accompanying its tepid unit revenue projections for 1Q2015. It expects unit costs excluding fuel, profit sharing and third party business expense to range between a 0.5% drop and a 0.5% increase. It is forecasting unit cost growth of flat to a 1% rise for CY2015.

As fuel prices began to fall significantly in 2H2014, United’s top line fuel expense decreased for United by 14.7% and 5.4% in 4Q2014 and CY2014 respectively. But the airline did record a USD237 million hedge loss in 4Q2014 that includes USD80 million in 2015 positions closed out in the quarter. The airline expects to post USD190 million in hedge losses in 1Q2015. CFO John Rainey explained that United’s CY2015 hedge position allows the airline to participate in 84% of future declines in the price of oil.

Putting the current fuel price environment into context, Mr Rainey stated that if United’s cash flows turn out to be better than expected, the airline would accelerate share buybacks and de-lever at a pace to reach its capital structure targets earlier than originally planned. Delta expressed similar sentiments about any potential financial gains from lower fuel prices.

United retains a solid position, but domestic macro trends for 2015 are tough to predict

Although United is encountering some choppiness in its unit revenue growth as 2015 gets under way, its efforts to keep unit costs excluding fuel in check, and falling energy prices, should help ease some of the sting from all factors affecting 1Q2015 unit revenues.

United also has a strengthening balance sheet to weather a short period of unit revenue headwinds.

What remains to be seen is how long the softness United is experiencing in the domestic market will last or if it will intensify. The domestic business was a strong performer for all the US global airlines during 2014, and with weak economic conditions elsewhere, those airlines may need to lean on the domestic space in 2015 to sustain revenue strength. Here, fortunately, the signs of an ecnomic revival are strengthening daily.