United Airlines is declining to offer a timeframe of when its sagging unit revenues will improve, but believes during 4Q2015 it will start to lap some of the drivers of its unit revenue decline that occurred in 2Q2015 and continues in 3Q2015 – the appreciation of the USD against many foreign currencies and lower fuel surcharges.

Although United Airlines' projected domestic unit revenue decline for 3Q2015 is less than 2Q2015, it appears that the pricing pressure it and other US airlines are facing the domestic market shows no signs of waning. Additionally, United faces challenges in its corporate unit revenues from the oil and gas sector, which is weaker due to lower energy prices.

As it continues to face pressure in both domestic and international markets, United has trimmed its 2H2015 capacity growth by a half point, which will result in consolidated capacity growth of 1% to 1.5% in 2015. It is planning 4Q2015 cuts in some of its weaker regions – oil industry routes, Brazil and the trans-Atlantic. 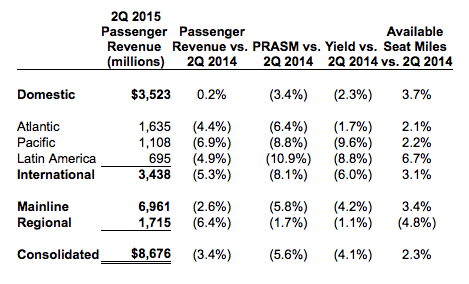 United has a larger exposure to the corporate oil and gas industry given that Houston Intercontinental is its second largest base measured by seat deployment and third by ASM allocation (20-Jul-2015 to 26-Jul-2015). 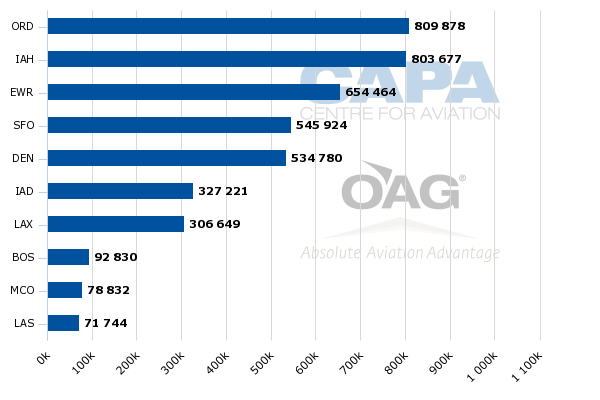 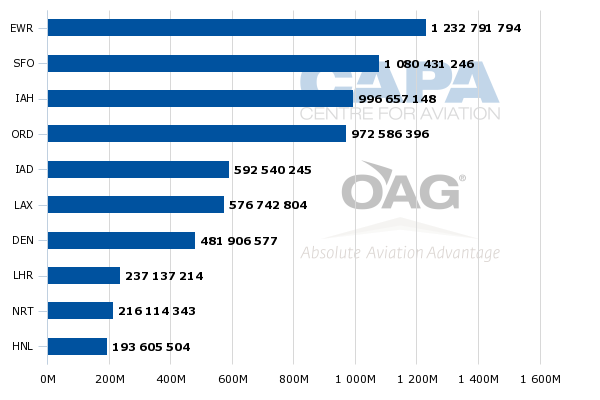 However, he believes the deepest revenue decline in that sector has occurred, and that United does not anticipate further material deterioration for the remainder of 2015.

United plans to reduce capacity allocated to its markets dominated by travel related to the energy sector by 9% in 3Q2015 and 8% in 4Q2015 in order to combat some of the weakness in that sector.

Despite its small presence in Dallas, United along with Delta feels pressure in the market

Mr Compton also remarked that competitive pricing in the US domestic market during 2Q2015 was worse than originally anticipated. United’s rival Delta recently concluded that three markets drove roughly 50% of its 2Q2015 domestic yield decline – Dallas, Chicago and Orlando. United has also cited weakness in Dallas and Chicago along with Houston.

United has a small presence at Dallas/Fort Worth, representing 4% of the airport’s domestic seats on offer for the week of 20-Jul-2015 to 26-Jul-2015 and roughly 3.5% of its ASMs. Delta holds a 4.5% domestic seat share and a nearly 5% domestic ASM share.

DFW’s largest airline by a wide margin, American Airlines (an 80% system seat share and a 74% ASM share), has been engaged in a price battle with Southwest Airlines, which in late 2014 began a massive expansion from Dallas Love Field after the lifting of the Wright Amendment that restricted certain long haul flights from the airport. American has essentially been matching Southwest’s pricing, creating a weak yield environment.

United competes with American in each market, and American holds a commanding seat share on all of those routes. In addition to American, United faces ULCC competition from Spirit on service from DFW to O’Hare and Los Angeles, and from both Frontier and Spirit on flights to Denver.

Given all the flux, United has been caught up in the pricing pressure in Dallas, so the pricing dynamics in the market have changed significantly.

Chicago O’Hare is United’s largest hub measured by seats and and fourth by ASMs. 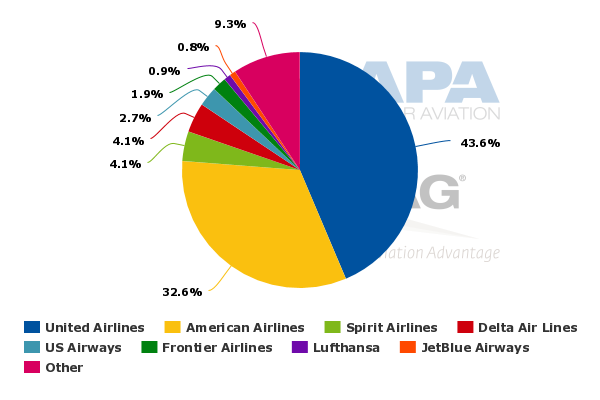 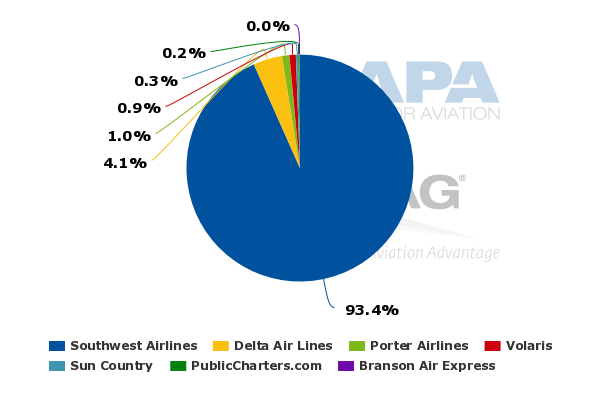 Similar to Dallas, United faces a scenario in the Chicago market where it is getting at least partially caught up in competitor pricing action, which may not ease any time in the foreseeable future.

Despite the lingering pricing pressure in the US market, United estimates that its domestic unit revenues will fall 1% to 3% in 3Q2015, an improvement over a nearly 4% decline in 2Q2015. But it seems as if the weak domestic yield environment will become a mainstay for the rest of 2015.

United’s largest capacity increase during 2Q2015 was to Latin America, where ASMs increased 6.7% year-on-year. The increase was partially driven by new service launches from Houston Intercontinental to Santiago and between Denver and Panama City.

Citing weakness in Brazil due to the depreciation of the BRL against the USD and the country’s general economic weakness, Mr Compton stated that United was cutting its capacity between the US and Brazil by 7% during 4Q2015. Data from CAPA and OAG for the week of 20-Jul-2016 to 26-Jul2015 show that United offers service from its Houston hub to Rio de Janeiro, and to Sao Paulo Guarulhos from its hubs at Newark, Houston, Washington Dulles and Chicago O’Hare. United will most likely execute the capacity reduction through frequency reductions and aircraft downgauge.

As United opts to cut its capacity to Brazil in late 2015, other airlines are expanding between the US and Brazil. Delta aims to launch flights from Orlando International to Sao Paulo, and Azul plans to introduce service from Belo Horizonte to Orlando.

United also recently unveiled its plans to invest USD100 million in Brazil’s third largest airline Azul, just prior to Avianca Brazil becoming a fellow member to United in the Star Alliance. Delta also just upped its stake in Brazilian airline Gol from 3% to 9%.

Mr Compton observed that United was seeing “good” premium traffic to the UK, but that US point of sale during the 3Q2015 high season was not as strong as the airline had anticipated in offsetting weaker offshore point of sale in Europe.

The weaker than anticipated US point of sale is one driver in United’s projected 11% decline in international unit revenues during 3Q2015. Its trans-Atlantic capacity is estimated to grow between 2.8% and 3.8% for the quarter, and overall capacity during 3Q2015 is forecast to grow 1.25% to 2.25%.

United projects its consolidated unit revenues will decrease 5% to 7% in 3Q2015, with 1.5ppt attributed to the appreciation of the USD, and 1.5ppt from competitive pricing actions in the US market. Lower fuel surcharges and lower revenue from the oil and gas sector are each representing 1ppt of the decline.

United is not offering guidance over when its unit revenues will gain momentum – either return to flat or begin to trend upwards. Mr Compton stated that during 4Q2015 the airline is starting to lap the drivers of the weakness, but did not specifically indicate how the airline would perform in the metric after 3Q2015.

Delta is aiming to reach flat unit revenue growth during 4Q2015, but has stated that it expects domestic weakness to remain intact during the summer high season. Given Delta’s projections and assessment, it is likely that United too will continue to face domestic yield weakness in the US market given its position in Chicago, an area where the pricing pressure is more acute.

United attains favourable profits and margins – but do investors want the whole package?

Similar to its large US network peers, United is navigating weaker domestic pricing and a soft international environment while posting solid top line financial results – a record 2Q2015 profit of USD1.2 billion (including special items) and projected 3Q2015 pre-tax margins of 13.5% to 15.5%. Its performance is a combination of favourable cost control (a 0.3% rise in 2Q2015 unit costs excluding fuel) and falling fuel costs.

This is a scenario that US airlines could sustain for perhaps the short to medium term as fuel prices are well below historical highs. But a lack of pricing traction in the domestic is not ideal for airlines attempting to prove their staying power to investors, which remain sceptical that the fundamental shifts in the business are permanent.

Even as margins, and in some cases earnings, are reaching record highs, investors may be looking for sustainability in the most granular metrics to commit their resources to companies that have historically been a losing gamble.