United Airlines continues to brace for a choppy recovery

Airlines worldwide have been forced to overhaul their businesses in a short period of time as the COVID-19 pandemic continues to upend air travel.

The predictions that leisure and visiting friends and relatives (VFR) passenger segments will lead a recovery in air travel are starting to materialise. And as result, all operators will start aggressively chasing those passenger segments in an effort to prop up severely depressed revenues.

In the US, United Airlines is working to cater to leisure customers on both long haul international and domestic routes, joining rivals in bolstering its presence in leisure markets.

But as United and other airlines work to structure their networks, revenue remains severely depressed, and many operators, including United, are pulling in capacity as the recovery continues to remain choppy.

American Airlines recently declared that “the customer is changing”, and there’s been a shift in its customer demographic to younger, leisure travellers. See: American and other US airlines switch energy to leisure passengers

An executive from United has expressed a similar sentiment to CNBC, noting that the airline’s customers are skewing younger than before the COVID-19 pandemic.

Both American and United are reworking their respective networks to capture a larger share of leisure customers.

American is adding some point-to-point leisure markets, including Austin and Indianapolis to Cancún, and during the US winter period United is launching services from non-hub cities, including Boston, Milwaukee, Pittsburgh and Columbus, to leisure destinations in Florida.

Bangalore is more of a business market, and is a move by United to forge competition with American on the route – American has stated that Bangalore is the highest growth market for its customer base. With United’s planned new service, it will be another link between the two tech hubs of Bangalore and the US Silicon Valley.

The changes that US majors are making to their networks will up their competition with low cost and ultra low cost airlines, which should create some interesting dynamics for pricing. Airlines are already discounting to stimulate demand, so pricing could remain challenging for the foreseeable future.

The changes the large network airlines are making are not permanent in nature; however, with a full recovery in demand some years off, the heightened competition will linger for some time.

Capacity planning continues to be a major challenge for US airlines

American, Delta, Southwest and United have all experienced some improvements in leisure bookings, but they are also stressing that the recovery in demand will remain choppy and jagged, and each airline’s revenue continues to remain significantly depressed.

United has stated that it expects the recovery to follow a linear path, and the airline has revised its capacity projections for 3Q2020 to a 70% drop, compared with a previous projection of a decline of 65%. 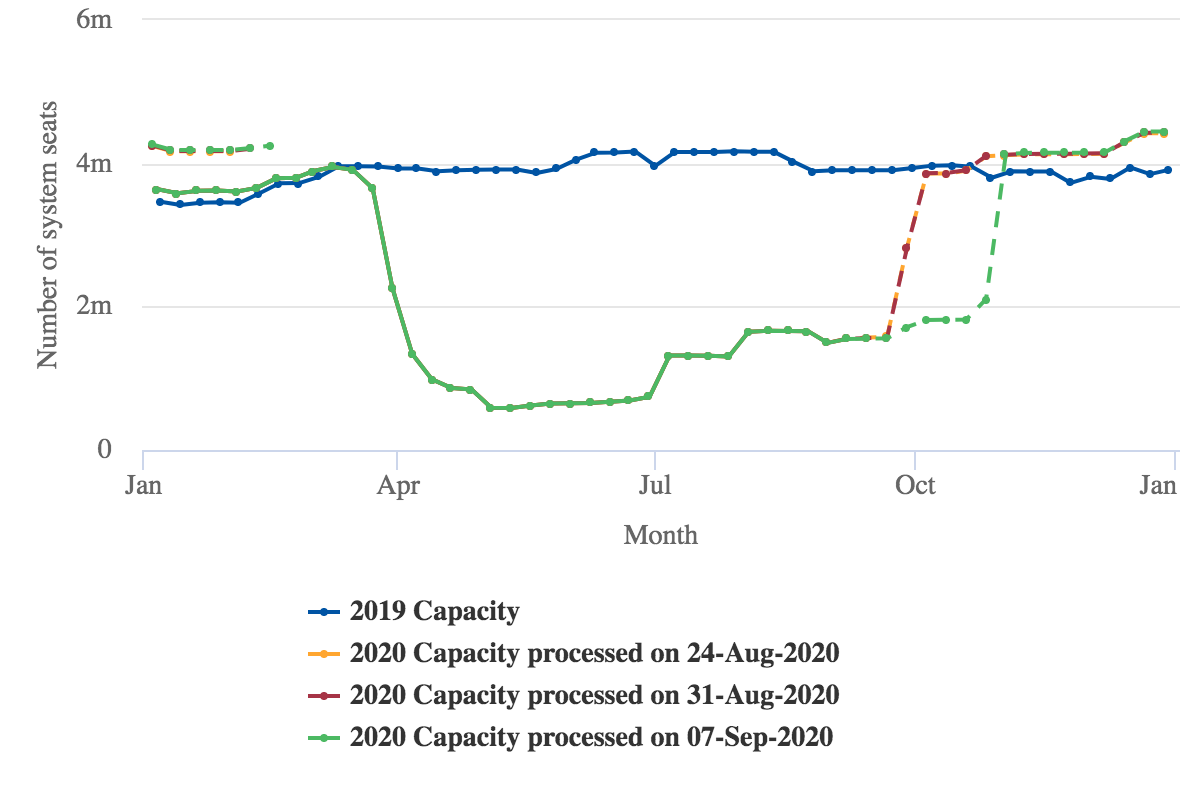 At one point, United stated that its capacity would fall 55% year-on-year in 3Q2020.

US airlines are facing challenges in capacity planning, given that booking curves are unusually short.

United has stated that it plans to continue proactively cancelling flights on a rolling 60-day basis until there are signs of a recovery in demand. American executives have recently stated that in some cases the airline is constructing schedules in a 45-day window, compared with 120 days in more normal times.

And with demand patterns so unpredictable, it is likely that airlines will continue to rein in some capacity throughout the US autumn, then add back some supply to accommodate an expected uptick in demand during the holiday season that starts with the country’s Thanksgiving holiday in late Nov-2020.

United’s revenue projections show an 85% drop year-on-year in 3Q2020, compared with a prior forecast of an 83% decline.

A reliable, widespread vaccine remains key to a full restoration of demand

United previously stated that it did not believe that demand would recover beyond 50% until an accepted treatment for COVID-19 became widely available.

The airline has said that reaching that 50% benchmark will entail the industry ensuring that individuals understand that flying is safe, which should lead to a reasonable recovery in VFR traffic. United has also stated that the recovery in business demand will be led by small group events. Huge conventions are not expected to resume for some time.

The timing of an effective, widespread vaccine is tough to predict. As United has noted, the full recovery in demand will likely require multiple vaccines that have been tested, found to be effective, manufactured, distributed and given to a wide percentage of the population.

The shifts in the way that airlines manage capacity and network planning during the past six months have been dramatic, and those changes could remain in place for the foreseeable future.

For airlines that had a larger share of business passengers before the pandemic, it is logical to switch resources to passenger segments that are leading the recovery.

And while the industry, and the world at large, awaits the approval and distribution of a reliable COVID-19 vaccine, airlines will continue to focus on where demand is recovering, which will create a different competitive landscape for the time being.