United Airlines admits there is still much work ahead to close the gap with its large network airline peers in key metrics such as margin performance. But efforts United has undertaken to improve its revenue performance showed promise in 3Q2014 as it out-performed its peers in passenger unit revenue growth.

Even as it faces some unit revenue headwinds in 4Q2014, United believes it will sustain profitability during the last quarter of 2014 as the US domestic market remains robust.

Similar to rival Delta, United could grow its capacity to upwards of 2% in 2015, which may cause some concern among investors. But United stresses that much of the growth stems from aircraft up-gauging, improved utilisation and increasing density of certain aircraft.

American’s unit revenue was pressured by cuts to Venezuela, something the airline has issued warnings about as it works to redeploy capacity from the country to other markets within its network. American also expects to face revenue pressure from the fallout over funds frozen in Venezuela during 4Q2014.

Like Delta, the US domestic market was United’s best performing entity during 3Q2014, with unit revenues increasing 7.9% on a 7.6% rise in yields. 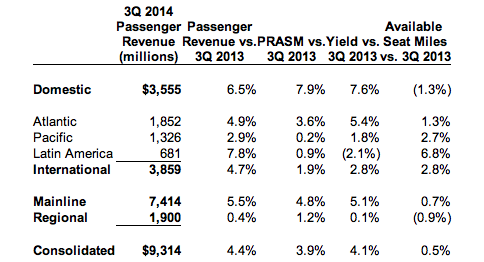 United chief revenue officer Jim Compton remarked that during 3Q2014 United enjoyed the full effect of downsizing its Cleveland hub after the airline cut its daily departures at the airport from 199 to 72 in Jun-2014. Mr Compton remarked that the changes United has undertaken in Cleveland, which mostly entails the elimination of small regional markets, should create an annual run-rate benefit of USD60 million.

The trans-Atlantic was United’s second best performing geographical entity during 3Q2014. It recorded a 3.6% rise in unit revenues on yield growth of 5.4%.

United recorded strong bookings in its premium cabin on trans-Atlantic routes in 3Q2014, said Mr Compton, particularly on flights to London Heathrow. He also remarked that the market’s absorption of competitive capacity increases was better than expected.

At this point United has not seen any pressure on bookings from conflicts in the Middle East and Ukraine or the Ebola outbreak in Africa, said Mr Compton. In an investor update issued 23-Oct-2014 United estimated that mainline Atlantic advanced booked seat factor for the next six weeks was up 2.1ppt year-on-year.

Mr Compton stated that United and its joint venture partners Lufthansa and Air Canada plan to decrease trans-Atlantic capacity in the winter 2014/2015 timeframe by half a percent, with United’s supply falling 3%. Delta and its SkyTeam joint venture members Air France-KLM and Alitalia have roughly halved their collective planned capacity increase in the trans-Atlantic.

United sees some gains in the Pacific, but faces continued pressure in 4Q2014

United’s Pacific markets improved sequentially in 3Q2014 as unit revenues were flat on a 1.8% rise in capacity. Its supply in the Pacific grew 2.7% year-on-year which reflects new service launches from San Francisco to Chengdu and Taipei. During 2Q2014 United’s Pacific unit revenues fell 2.6% on flat yield growth as capacity increased 2.4%.

Mr Compton remarked that strong demand in China for the summer peak travel season helped lift United’s fortunes in the Pacific during 3Q2014, and that the new routes to Chengdu and Shanghai were performing better than expected.

But heading into 4Q2014 United faces 20% competitive capacity growth in the Pacific, particularly in Shanghai and Beijing, said Mr Compton, which will pressure United’s unit revenue performance as peak period demand tapers off. He estimated that the competitive supply growth and continuing currency pressure from fluctuations of the Japanese yen would create a 1.5% headwind in United’s consolidated passenger unit revenues during 4Q2014.

United plans a seasonal push into Latin America during 4Q2014

United’s unit revenues on routes to Latin America increased 0.9% year-on-year during 3Q2014 on a 1.8% rise in yields. Its capacity in the market increased 6.8%.

Mr Compton remarked that United recovered more quickly than originally anticipated from soft corporate demand driven by the FIFA World Cup football tournament held in Brazil during Jun-2014 and Jul-2014. Delta’s unit revenues in the region dropped 5% year-on-year in 3Q2014 as yields fell 3% on 16% capacity growth. American’s capacity to Latin America increased just 1% during 3Q2014, but its 11.7% slide in unit revenues and 8.7% decrease in yields reflect the revenue headwinds created by its cuts to Venezuela.

United is planning double digit capacity growth in its Latin American entity in 4Q2014 targeted largely toward beach markets. Mr Compton explained that the airline was opportunistically redeploying marginal capacity from elsewhere in the network.

He did acknowledge the ample capacity increase in Latin America would create some unit revenue pressure in 4Q2014, but remarked that United concludes the additions are profit maximising for its overall network. Mr Compton cited the example of taking a Saturday flight from New York LaGuardia to Chicago O’Hare and then operating flights from Chicago to Cancun, noting that was the type of change that generates incremental capacity, and is accretive to margin.

Overall, United is working to increase what it dubs as “seasonal shaping” as part of efforts to improve its revenue. As an example of the types of adjustments United is making on a seasonal basis, Mr Compton stated that United’s capacity in the trans-Atlantic will be 40% higher in Jul-2015 than in Feb-2015. Those types of changes – reducing supply on a seasonal basis during shoulder periods – would improve United’s yields for the full year, he concluded.

United estimates the seasonal adjustments should produce a half point of passenger unit revenue improvement in its trans-Atlantic entity in 2015.

The seasonal shaping United is undertaking is part of efforts by United to improve network and revenue optimisation to lifts its revenues. Other initiatives include changes in revenue management to better optimise booking curves to hold more seats for close-in higher yielding bookings. Previously, United estimated that the initiative would produce a full point of unit revenue gains in 3Q2014, and the airline met that expectation.

Other changes underway at United include consolidating departure frequencies. In Jan-2015 the airline is reducing its five daily flights from Denver to Minneapolis that are operated with a mix of mainline and regional jets to four daily flights flown with mainline aircraft. United estimates the change would result in a 3% rise in daily seats and a 30% rise in seats per departure.

United is making similar changes on routes from its hubs in Chicago and Newark, said Mr Compton. During 2015 United plans to increase aircraft gauge by 5% and reduce departures by 3%.

The most pronounced change will occur at Chicago O’Hare where average daily departures could drop up to 8%, and seats per departure increasing up to 10% in some months, said Mr Compton. United believes the changes should help it better manage congested airspace at its Chicago hub.

After recording impressive passenger unit revenue growth in 3Q2014, United is bracing for headwinds in 4Q2014 stemming from a 1.5ppt advantage it gained in 3Q2014 from the reconciliation of some interline tickets. The airline projects its consolidated passenger unit revenue performance will range from a 1% decrease to 1% growth, while consolidated unit costs excluding fuel, profit sharing and third party business expense should increase 1.25% to 2.25%. Its unit costs excluding those items increased 1% year-on-year during 3Q2014. 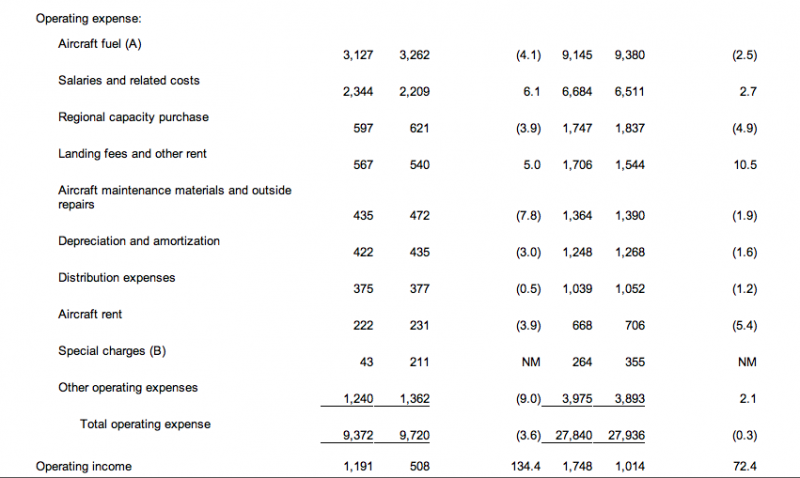 United assures its 2015 capacity growth will be executed efficiently

United is projecting consolidated capacity growth of 1.5% to 2.5% in 2015, with 0.5% to 1.5% directed to domestic markets. Mr Compton stressed that United was executing efficient growth with half of the capacity increase stemming from the installation of slimline seats.

Other drivers of the growth include aircraft up-gauging and increased utilisation. United’s planned supply expansion in 2015 is an uptick from the 0.2% to 0.4% growth projected for 2014.

Delta Air Lines has also projected 2% capacity growth in 2015, and similar to United, stressed that some of the increase is attributed to improved utilisation as various aircraft during the past few years have been out of service for different types of modifications.

United’s favourable 3Q2014 performance follows similar results recorded by the airline in 2Q2014. At that time the company outlined how it intends to close the revenue deficit it has had relative to its peers, and for the moment the groundwork it is laying appears to be producing positive early returns.

United’s 3Q2014 operating margin of 11.7% still lagged the 15.8% recorded by Delta. But United has improved its performance in that metric by 450 basis points year-on-year.

United admits it is in the early days of working to optimise the potential of the global network that it believes holds a competitive edge against its peers. United is smart to be cautious in its commentary about when it will close the competitive gap with other global network airlines after fits and starts in its attempts to level the playing field during the past couple of years. But for now it can enjoy some early success from its long-awaited efforts at shoring up revenue.