Aircraft orders have been scarce in 2009, with Boeing and Airbus netting a combined total of just 11 orders (after cancellations) for the year to date. However, United Airlines' request yesterday for bids for up to 150 aircraft to replace its widebody fleet and some narrowbodies represents a strong counter cyclical opportunity for both manufacturers - and the airline. Airbus parent, EADS, was up 1.3% yesterday, while Boeing was up 4.6%.

Boeing and Airbus are both sitting on comfortable order backlogs, but recent commentary by Airbus CEO, Tom Enders, has suggested that the ordering weakness could linger beyond the end of 2009. Balanced against this is news from Bombardier that it has seen a pick up in interest from its customers (mostly business and regional jets) over the past two months, even if the market remains anything but buoyant.

The United opportunity is reportedly a winner takes all deal - and could be signed by Northern Autumn. Winning the 150 aircraft would represent a major notch in the belt in the competition between the manufacturers this year. Although Boeing has remained tight lipped on its order target for the year, 150 aircraft is half of Airbus' current full-year order target for 2009.

The share price strength seen by the aircraft manufacturers was even stronger for aircraft lessors, including Aircastle (+1.9%), Genesis Lease (+4.8%) and Babcock & Brown Air (+5.5%).

Aircraft lessors are still reporting high levels of demand, particularly for younger, more fuel efficient aircraft, as oil climbs back towards USD70 per barrel. IATA reported yesterday that during April global airline fleets increased by more than 100 aircraft, with 109 new deliveries and 30 aircraft taken out of storage, and retirements of just 27 aircraft. This comes despite the continued downturn in passenger demand (particularly in the premium segment) and a global capacity cut of 2.5% during the month, with carriers reducing flying hours (and cutting profitability and yields). 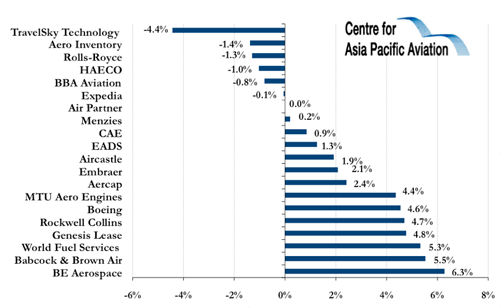