United Airlines is taking advantage of expansion at one of its key hubs – Denver International – through its efforts to add gates at the airport, which is the airline’s fastest growing hub and one of its most profitable.

The planned expansion occurs nearly two years after United rebanked Denver, maximising revenue generating connections as part of a broader mid-continent hub strategy to bolster its performance in the US domestic market.

Denver is a somewhat unusual hub in the US domestic market as United faces formidable competition from the two low cost operators Southwest and Frontier. Yet United’s push on bolstering connectivity in the market appears to be paying off, reflected in its commitment to keep growing in Denver.

Denver International has consistently been a top performer in United's network

Denver is United’s second largest domestic hub measured by weekly departing frequencies. Data from CAPA and OAG show that as of early Jan-2020, United’s total frequencies from Denver were 3,604, of which 2,942 were dedicated to the domestic market. 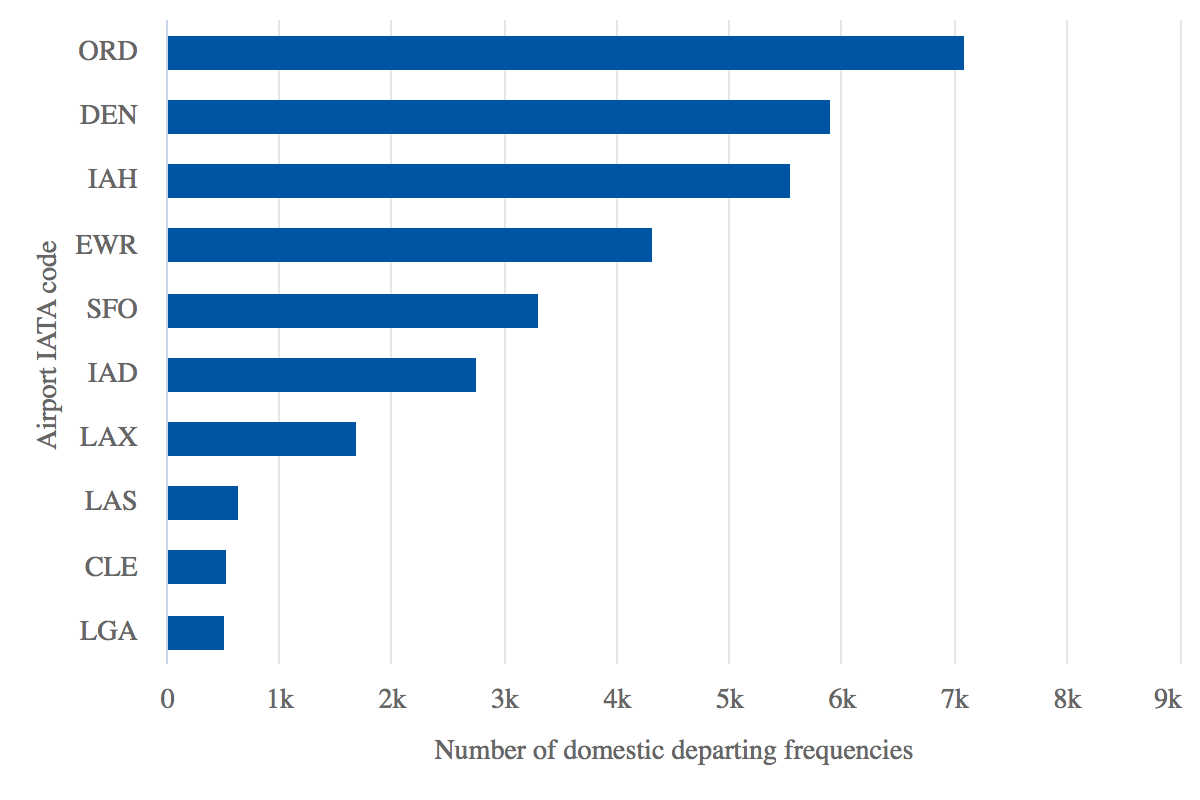 United has spent the past couple of years rebanking its US mid-continent hubs – Chicago O’Hare, Denver International and Houston Intercontinental.

The decision to bolster connectivity in those markets was part of an effort by United to refocus on the US domestic market after the airline judged that it had been uncompetitive with its fellow full service rivals American and Delta.

Back in late 2016, executives at United declared that Denver was the airline’s most profitable hub, and more recently company management told local the news outlet The Denver Post that the airport was United’s fastest growing and most successful hub in its network.

In early 2018 United rebanked its operations in Denver to maximise connections, adding approximately 60 mainline flights to its operations at the airport. The airline has completed similar rebanking schemes in Houston Intercontinental and Chicago O’Hare, and has consistently touted the success of the rebanking of those three hubs.

Denver thrives for United, despite a significant presence from low cost competitors

Denver is one of the few major airline hubs in the US that has a high representation from LCC/ULCCs. Low cost operators represent 32.4% of Denver’s departing frequencies as of early Jan-2020. 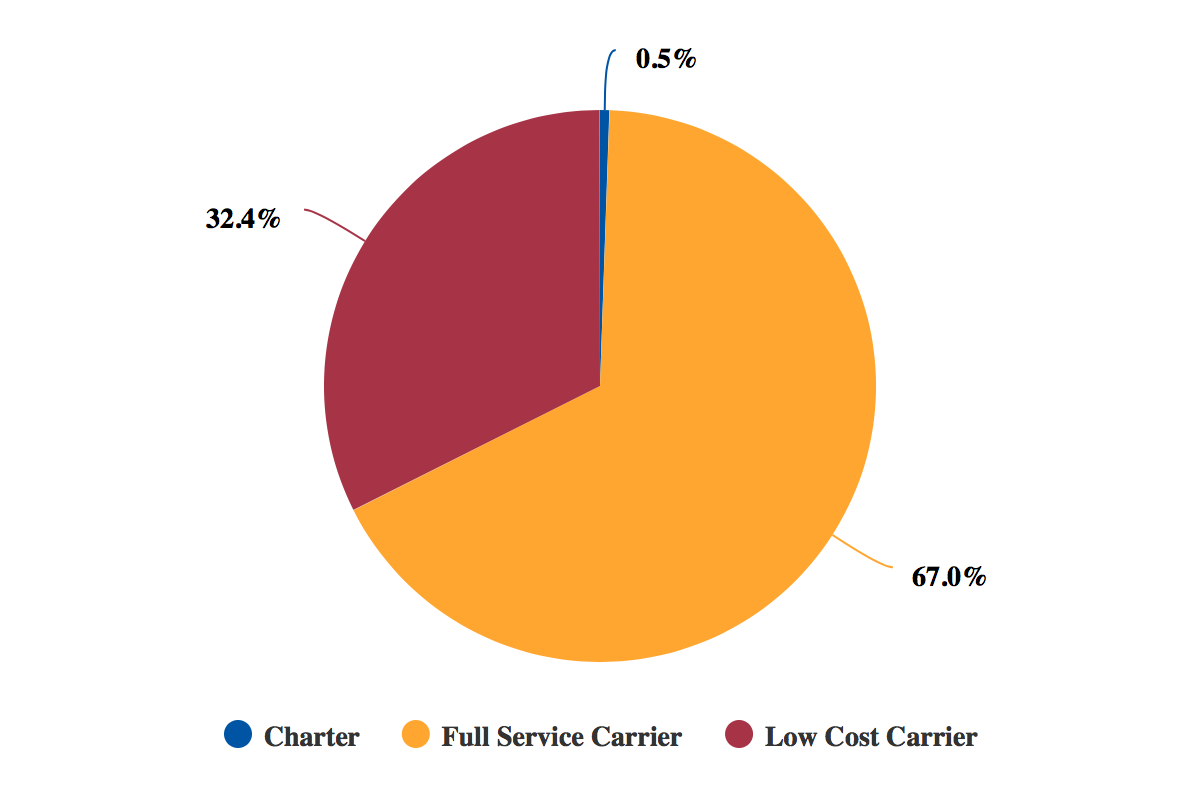 That is comparatively higher than the three largest domestic hubs of United’s large full service competitors American and Delta.

Part of the reason that Denver has been such a success for United was highlighted before the company’s rebanking of the airport.

At the same time as airline executives remarked that Denver was its most profitable hub, United’s management also stated that the airport also had the highest percentage of connecting passengers among the airline’s hubs.

Although Southwest has some level of connecting passengers in its network, together with Frontier (Denver’s third largest airline) it operates largely point-to-point flights, which gives United an opportunity to use Denver’s geographic location to maximise connection flows, and particularly east-west flows.

Denver International percentage of departing frequency by airline, as of early Jan-2020 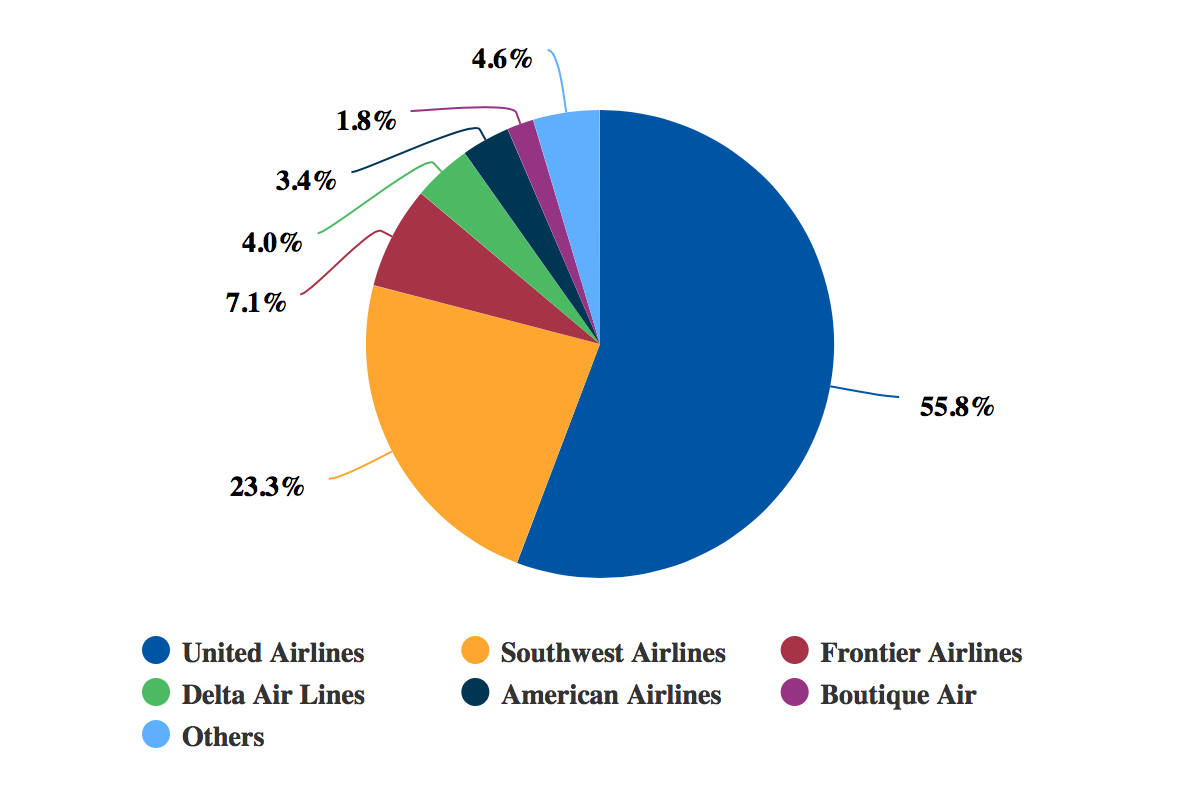 Denver is in the midst of a massive facilities upgrade totalling USD3.5 billion that includes the addition of 39 gates (a 30% increase) spread across its three concourses and a terminal renovation that will have enhanced security, new dining options, and more open and flexible check-in space.

Southwest has already stated that it would prefer to use 16 new gates being built in Concourse C at Denver International, and United is seeking approval from Denver’s City Council to add 24 gates at the airport, according to The Denver Post. The publication stated that the gates would include 12 new and 11 existing gates in Concourse A and one new gate in Concourse B.

Officials from United also told the publication that current construction at the airport would allow the airline to convert some of its Express gates (used for smaller aircraft) to mainline gates for the operations of larger jets.

The moving parts will allow United to continue solidly expanding from Denver, which could handle up to 90 million passengers by 2039. Denver International was designed to handle 50 million passengers, yet its annual passenger throughput has consistently been above those levels since 2008.

Southwest has not yet finalised a deal with Denver airport officials regarding additional gates at the airport, but Denver is strategic for the airline, representing the airline’s third largest base measured by weekly departing frequencies. 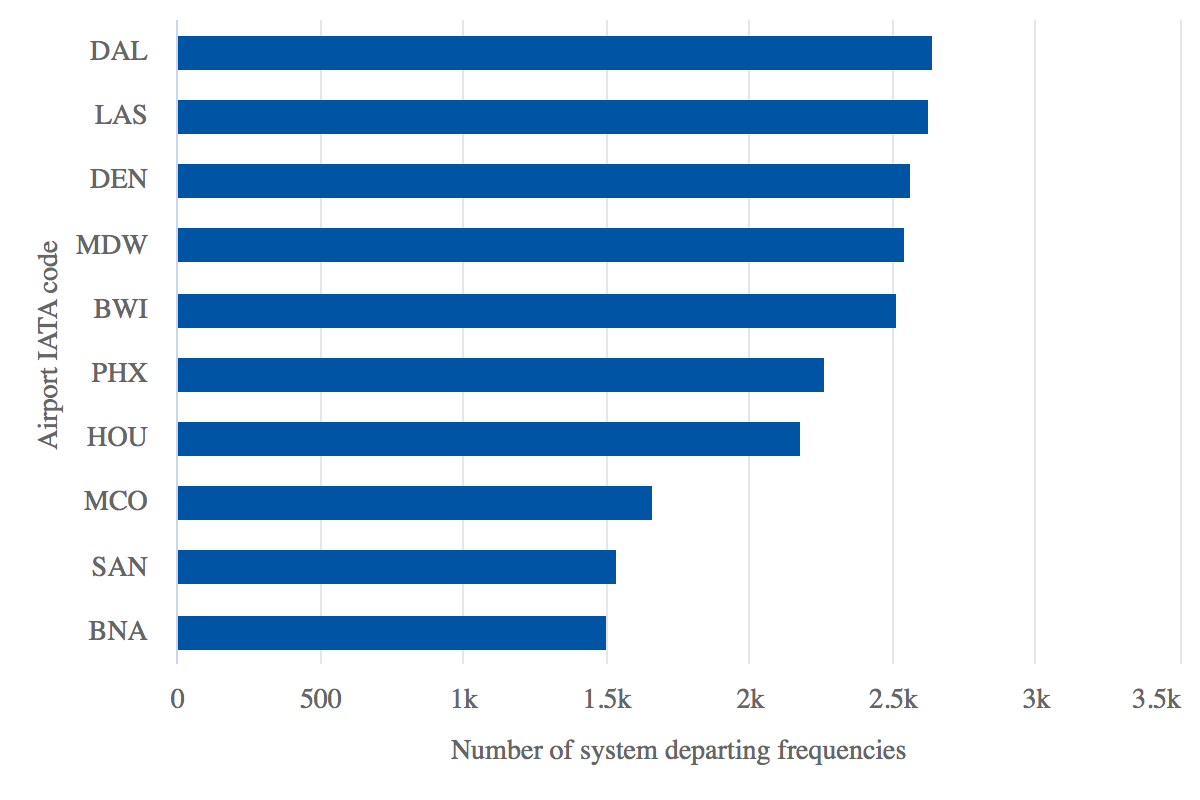 Frontier has been less vocal about securing a portion of the new gates, but the airline is no doubt studying how it can take advantage of more gate space in Denver.

Denver's largest airlines are positioning themselves for further growth

United’s decision to capitalise on more available assets in Denver is not surprising. The airline consistently touts the performance of Denver within its network and is aiming to sustain its success at the airport through Denver airport’s efforts to ensure that it can handle forecast passenger growth.

United’s rivals in Denver are also working to determine how they can leverage new space at Denver International, which ultimately bodes well for Denver’s continued solid passenger growth.