Colombian ultra-low cost start-up Ultra Air has formally outlined plans to launch by YE2021 from a base in Medellín. The company will be Colombia’s second ULCC after Viva and will also face legacy competitors – Avianca and LATAM – that are becoming more lean during Chapter 11 bankruptcy proceedings.

All of Colombia’s airlines see promise in the market as South America recovers from the COVID-19 pandemic, and there’s no shortage of ambition among those operators. Dynamics are also evolving as low cost operators think outside their model’s traditional confines.

Ultra Air's base in Medellín is a stronghold for Viva

Ultra Air first surfaced in late 2020. The airline is led by William Shaw, who helped launch Viva Air Colombia (now Viva) and led that airline until 2016.

During Jun-2021 Ultra Air gained approval from the Colombian government to start the certification process, after reportedly finalising a deal to operate Airbus A320s.

More recently, the airline has said that it intends to launch service by the end of 2021 from a base at Medellin Jose Maria Cordova Airport, which happens to be Viva’s largest base, representing 26% of the airline’s departing frequencies, according to data from CAPA and OAG.

Viva is building out Medellín as a connecting point as it works to capitalise on opportunities within Colombia. As of early Oct-2021, Viva was the airport’s largest airline measured by seat deployment, with nearly 37%. 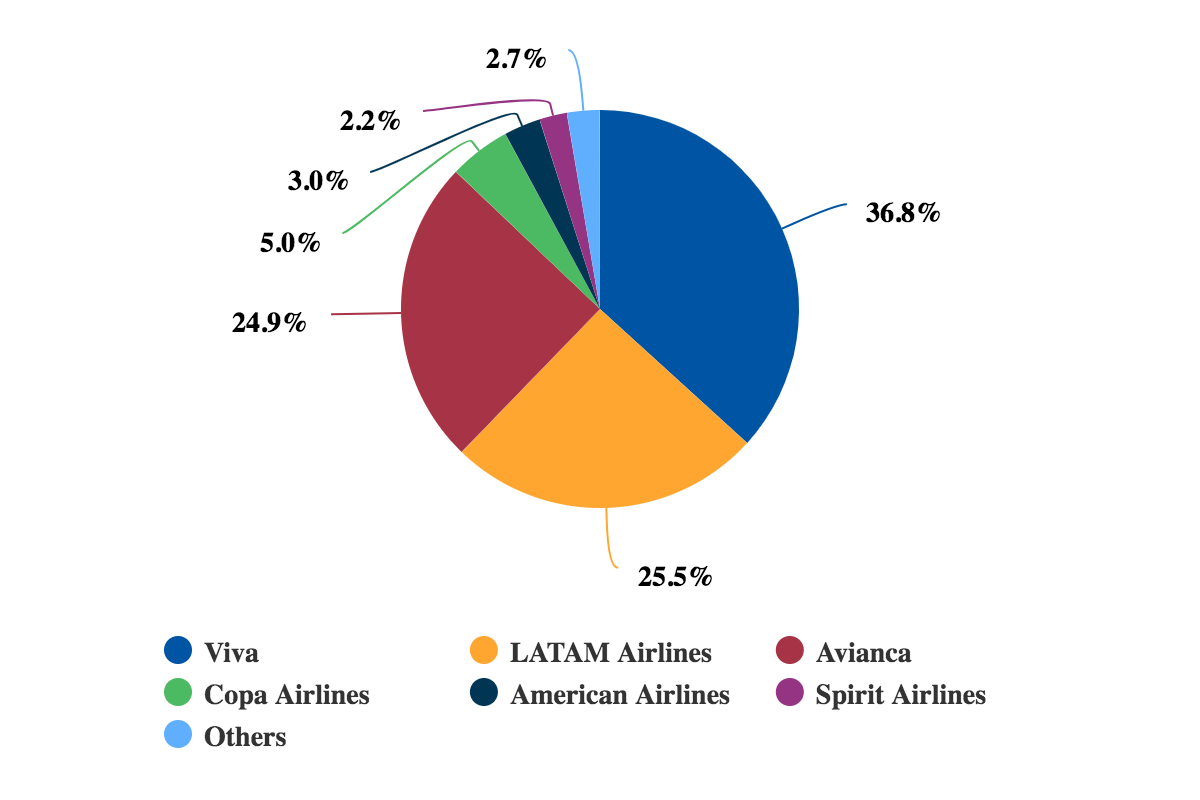 Avianca adapts its business to compete with low cost competitors

Colombia appears to recovering from the coronavirus pandemic at a solid pace. By the end of 2021 the country's system ASKs will have reached 2019 levels. 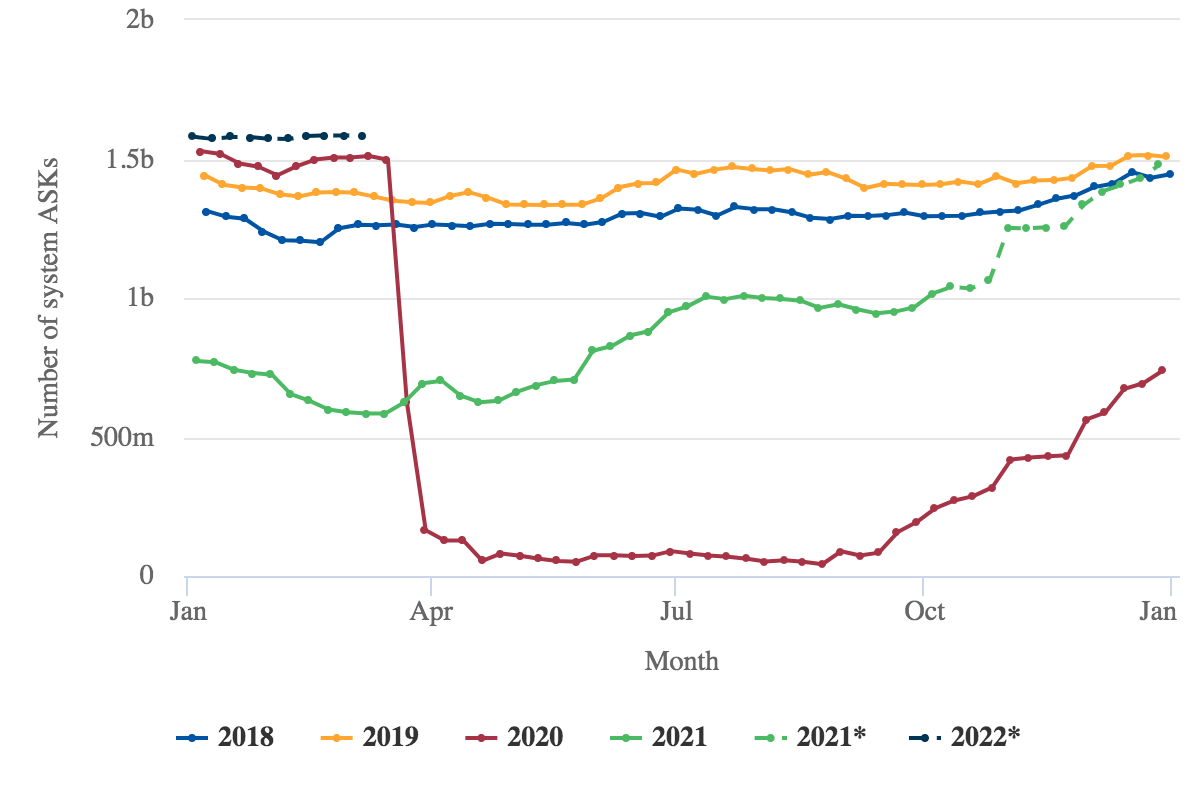 Part of Ultra Air’s calculus is that Colombia’s largest and second largest operators, Avianca and LATAM Airlines Colombia, are shrinking in the bankruptcy process, and that will create opportunities in the market place.

Avianca plans to emerge from Chapter 11 with a fleet of 109 aircraft, compared to 147 aircraft before its restructuring.

The airline has acknowledged that low cost carriers have been gaining momentum in Latin America, and the penetration of those operators in Avianca’s home markets “has driven significant and lasting downward pressure on fares, which, when taken together with evolving passenger preference, has compelled Avianca to change its strategy”, the company told the bankruptcy court.

Part of Avianca’s strategy is densifying some of its Airbus A320s, as well as operating its domestic service in a single cabin configuration. The airline plans to create a simplified pricing structure to allow passengers to customise service offers on board.

Those moves are designed to help Avianca compete more effectively with lower cost airlines, and it has taken steps through Chapter 11 to improve its own cost structure.

But Colombia’s current ultra-low cost carrier has not been resting on its laurels. Recently, Viva CEO Felix Antelo recently explained that the company hadn’t “stayed still during this crisis.”

Viva undertook its own private restructuring, said Mr Antelo, noting that the company had renegotiated more than 1,000 contracts ranging from “the big guys”, such as aircraft lessors, to smaller vendors. As a result, Viva’s cost per available seat mile (CASK) has fallen approximately 10% below pre-pandemic levels.

“That number will keep going down as our scale keeps growing”, said Mr Antelo, who projected that Viva’s fleet would reach more than 50 aircraft in 2025.

Mr Antelo acknowledged that the Chapter 11 process would give Avianca, Aeromexico (also restructuring in Chapter 11) and LATAM “a lower cost base for sure.”

However, he also said: “We still need to see and understand” how big of a chunk of costs those airlines are taking out of their respective businesses.

Could more partnerships between ULCCs and FSCs emerge?

Ultra Air is launching during a time when low cost operators are thinking outside the confines of the traditional budget airline model.

Both Ultra and Viva also believe there is an opportunity to forge partnerships to enhance their competitiveness. The Chilean ultra-low cost operating group JetSMART recently tabled a new relationship with American Airlines, and the US major airline is also taking a minority stake in JetSMART.

Similar relationships could become a distinct possibility. Mr Antelo believes that more partnerships between LCCs/ULCCs and legacy airlines will develop, particularly in regions where “you do need that feed and traffic to keep growing”.

During an interview with CAPA's sister publication Routes Online in Jan-2021, Mr Shaw said Ultra Air would be 100% open to forging codeshares and connectivity with other airlines. Mr Shaw also remarked that Ultra Air was planning to use global distribution systems (GDS), noting, “We’ve found distribution channels very lucrative if you set them up the right way”.

Low cost operators in South America are no doubt working to ensure that their networks will remain competitive by ensuring they are more comprehensive, and now more than ever those operators seem open to developing partnerships to help build up the breadth of their offerings.

New start-ups worldwide now have to prove their mettle

Now, the calculus of all those airlines will soon be put to the test. At the moment, consumers could be the biggest winners, with more low fare options to choose from new and old airlines alike.