It might appear to be a strange time to be negotiating the sale of equity in an airport, but discussions between the Stobart Group and AviAlliance to that end over Southend Airport appear to have been progressing for some time. The deal could be worth up to GBP800 million.

The FTSE 250 Stobart Group encompasses road freight, rail and air transport. The group also has an interest in Carlisle Airport and Teesside Airport in northeast England, where it holds a 25% stake and a management contract. Stobart is in a difficult period, owing to liabilities arising from the collapse of the airline Flybe, in which it held a 30% stake.

Southend was once one of the UK’s busiest airports. Essex is a heavily populated county (1.5 million) to the east of London and a rail link directly to and from the airport means that it can be considered as an alternative airport to London City and London Stansted airports for those living in the east of London, and even in the centre.

The smallest of the London airports seems to be an obscure interest for the German company, but recent events highlighting the diminishing prospect of additional runways in London make Southend look like an enticing prospect.

Stobart Group has received a GBP700 million proposal from Germany’s AviAlliance for the purchase of a 25% stake in London Southend Airport.

The FTSE 250 Stobart Group, which encompasses road freight, rail and air transport, also has an interest in Carlisle Airport in northern England, close to the Scottish border, and latterly Teesside Airport in northeast England (previously known as Durham Tees Valley Airport), where it holds a 25% stake and a management contract. The Carlisle Airport is under consideration for the award of ‘freeport’ status.

The sale is likely to be delayed owing to the COVID-19 coronavirus outbreak, following several months of discussion. The deal could be worth up to GBP800 million.

The announcement actually pushed the Guernsey-registered Stobart Group’s shares into the black, registering a 3.8% immediate gain in what is otherwise a very bleak time for stock markets.

Stobart is seeking extra cash due to the impact of coronavirus and has stated that it cannot offer accurate guidance at this stage as to what the overall effect on finances and passenger numbers would be.

Stobart is also in a difficult period owing to liabilities arising from the collapse of the airline Flybe, in which it held a 30% stake.

Flybe fell into bankruptcy earlier in Mar-2020 after failing to agree a state aid package with the government; a demise that was hastened by the onset of the COVID-19 outbreak and its propensity to annihilate air travel demand.

Before that, in 2019 Stobart Group sold a 51% stake in Stobart Air (previously Aer Arann) to an employee benefit trust, made up of the airline's employees, in order to comply with EU ownership requirements for "community carriers". In the air transport sector, that just leaves it with its airport assets now.

Stobart’s chief executive Warwick Brady insists that, “Despite the current challenges presented by the COVID-19 virus, we continue to own and operate aviation and energy assets with significant underlying value. It is impossible to say what structural changes will occur to the aviation industry in the coming months. However, ultimately the current crisis will pass, and people will continue to want to fly in and out of one of the world’s largest travel markets”.

Southend has the brightest future

That is certainly true of one of those assets, Southend Airport, because it is part of the London airport network, even though it is more than 40 miles (65km) by road from the capital, out on the Essex coast.

It may not be so true of Carlisle, which can certainly prosper if it acquires 'freeport' status, but which is currently limited to flights to Southend, Belfast City and Dublin, all on Loganair. That airline is taking over some of the busier routes previously operated by Flybe, elsewhere.

It is possible that Carlisle’s future (and present) could be impeded, ironically and indirectly, by Flybe’s failure.

Location of Southend Airport in relation to London

However, it should be noted that Stobart Group has reported that additional liquidity is likely to be required, especially for London Southend Airport, due to the impact of the coronavirus outbreak on traffic.

Teesside Airport is another case in point. It struggled for many years because its limited catchment area – between Newcastle and Leeds Bradford airports, and with a direct rail service to Manchester Airport from the main town, Middlesbrough – could not attract a significant number of routes.

The airport was kept going by the KLM service to Amsterdam, a result of the historical chemical and engineering industries in the area, and by Eastern Airways’ regional commuter services. Even then, it only managed 150,000 passengers in 2019.

Southend can be considered as a London airport, thanks to its rail link

Southend, once one of the UK’s busiest airports, is in a different league.

Essex is a heavily populated county (1.5 million) to the east of London that continues to grow as an overspill for the capital. Furthermore, a rail link directly to and from the airport means that it can be considered as an alternative airport to London City and London Stansted airports for those living in the east of London, and even in the centre.

There is a single 1.8km runway capable of handling aircraft up to the size of a Boeing 767.

EasyJet is the largest operator, with more than 20,000 weekly seats at this time (week commencing 16-Mar-2020), followed by Ryanair, Wizz Air and Loganair.

Since 2016 passenger traffic growth has been steady, at between 25% and 38% per annum, which is one of the consistently highest rates of growth in the country. 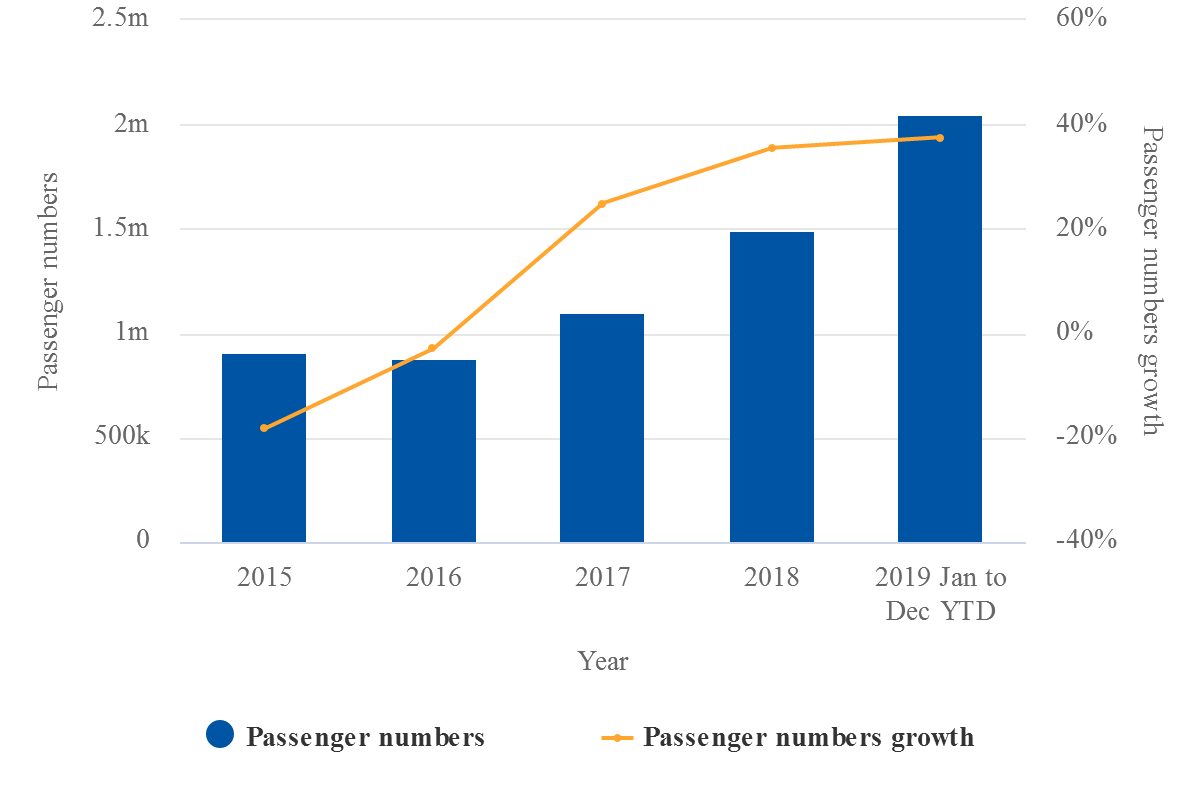 AviAlliance would be downscoping with this investment, but may sense an opportunity

The question is, what is the attraction to AviAlliance, or 'Hochtief Airports' as it used to be called?

None of these airports is in a similar category to Southend, being the major gateways to countries or regions.

It could be assumed that AviAlliance is taking a gamble that the ‘additional London area runway’ investigation procedure – now close to a decade old and with the result that one for Heathrow Airport has been rejected on environmental grounds – is over, and will not be restarted.

Even if it is, it will be beyond 2030 before Heathrow gets its additional runway.

With additional facilities for Gatwick (bringing a taxiway into use as a runway) and Stansted also being a long time in the future, with London City being restricted by space and by environmental controls, and with London Luton Airport also having suffered a setback recently when its expansion plans were rejected, AviAlliance may see an opportunity to revive Southend back to the position of prominence it held in the 1960s – at a time when much of its business was performed by aircraft that carried both passengers and their motor vehicles.