Russia's invasion of Ukraine continues to stall the capacity recovery for European aviation, but the impact on airline schedules remains understated. Europe's seat capacity is down by 28.8% versus 2019 in the week of 14-Mar-2022. This is just 0.5ppts worse than last week, but it is the second week of sliding after five previous weeks of improvement.

Data from IATA indicate that Russia's invasion of Ukraine prompted an immediate 8% week-on-week drop in global airline bookings, and bookings in Europe fell by 14%. There are signs that future schedules filed by European airlines are now contracting a little more than previously.

If bookings continue to suffer into the northern summer, European airline schedules must surely be trimmed further.

In the week commencing 14-Mar-2022 total European seat capacity is scheduled to be 20.2 million, according to OAG schedules and CAPA seat configurations. This is 28.8% below the 28.4 million seats of the equivalent week of 2019.

This is only 0.5ppts worse than last week, but this is now the second successive 0.5ppt decline after a 12.7ppt improvement over the previous five weeks.

The Middle East has taken an upward step in the trend in the week of 14-Mar-2022, whereas Latin America has taken a downward step. 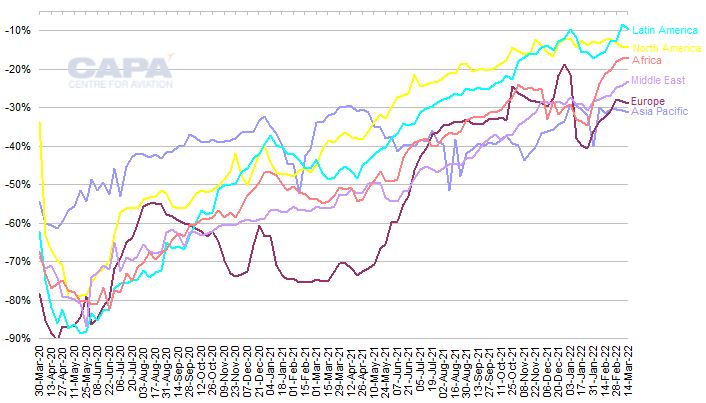 Schedules still do not reflect Russia's invasion of Ukraine

Schedules filed with OAG by Europe's airlines still do not appear to be reflecting the effects of the Russian invasion of Ukraine – a point that has been noted by CAPA Analysis more than once since the invasion.

Ukraine seat capacity derived from schedules filed with OAG and CAPA seat configurations for the week of 14-Mar-2022 has fallen to 16% of the equivalent week of 2019, from 19% last week.

Weekly seat capacity for Russia derived from schedules is at 65% this week, down from 78% last week and 83% in the week of 21-Feb-2022. The Russian Federation is not part of EUROCONTROL, so up to date data on flight numbers are not available.

Nevertheless, this does not look low enough, given that almost all international flights to/from Russia are suspended and yet schedules data still indicate international seat capacity at 32% of 2019 levels.

The negative impact of the invasion on European aviation is felt not only in reduced activity in Russia and Ukraine.

More broadly, sentiment towards air travel typically suffers in times of conflict and uncertainty. This can be compounded by economic challenges, such as may result from sanctions on Russia (which also have an impact on the nations imposing them).

Data from IATA Economics, using DDS ticketing data at 03-Mar-2022, indicate that global airline bookings have suffered as a result of the Russian invasion of Ukraine.

In mid-Feb-2022, before the invasion, international bookings were above 50% of 2019 levels and domestic bookings were close to 90% as the industry recovered from the Omicron wave of COVID-19.

This changed in the week of 24-Feb-2022, when Russia invaded Ukraine.

…while bookings in Europe fell by 14%

Not surprisingly, travel to/from Eastern Europe suffered the biggest declines in demand as Ukraine and Moldova closed airspace entirely and experienced more refunds than new ticket sales in that week.

In Russia, bookings dropped by 52% week-on-week.

IATA said that there were some increases in demand for air travel from countries neighbouring Ukraine: for outbound flights to Western Europe and to countries with sizeable expat communities in Ukraine (e.g. India, Nigeria, Georgia and Morocco).

However, this demand from people leaving Ukraine did not offset the negative demand impacts.

Moreover, it is likely to be transient, whereas the negative impacts will last as long as the conflict – possibly a lot longer.

European airline schedules seem likely to be trimmed further, even if the underlying recovery from COVID-related international travel restrictions remains broadly on course.