For those who have been befuddled by the ongoing assaults on aviation in the UK, there has been some validation of their misgivings, but little cause for optimism.

A letter dated August 12 to Olivier Jankovec, director general of the Brussels-based Airports Council International has been leaked to the press. In it Chancellor of the Exchequer, George Osborne, has admitted that “APD is fundamentally a revenue raising duty and currently raises around GBP2.5 billion per year.” This puts to rest any notion that the levy was somehow connected to environmental concerns, revealing the real purpose behind the scheme, which imposes the world’s steepest taxes on travelers.

Also in recent statements, Osborne has indicated that additional APD increases will be implemented in the near future. Critics of the tax cite a 50-70% drop in traffic at many regional airports and attribute that decline to the current APD levels. They note that not only does it hurt the regional airports, but it also drives those determined to travel to the already overtaxed London area airports.

Additionally, the proposal of a high-speed rail connection between Heathrow and Gatwick—immediately dubbed Heathwick—has drawn criticism across the board. The plan, ostensibly designed to create a virtual “mega-hub”, envisions a joining of the runway capacity at the two airports as an alternative to the politically unpopular construction of additional runways.

Supporters of the concept have noted that an expansion of mainline flights at Gatwick will push up the price of LGW operations and eventually force LCCs and charter operators to the underused and generally unpopular Stansted.

“No thanks” from operators

The proposal has drawn universal condemnation from airlines, the BAA and many others who see the GBP5-8 billion project as bringing little improvement to the core problem, lack of adequate runway capacity in Southeast England.

IAG Chairman Willy Walsh commented that,“It is not an efficient way of doing things. The cost would clearly be significantly greater than the previous options that have been rejected. I struggle to see how it would be funded. The airports are not owned by the same owner.”

And in a rather mildly stated response, Ryanair’s Michael O’Leary said, “There is no way of moving the budget airlines out of Gatwick.”

A report that will be DOA?

A report is due to be published next spring with further details on possible solutions to the capacity problem but given the cost, delay and solid opposition to the plan, it appears unlikely that it will gain much traction when released.

Observers contend that these policies, taken together, pose a significant risk to the future of British tourism, according to the tourist organization, Visit Britain. In 2010 over 70% of the UK’s visitors arrived by air and were therefore subject to the APD. 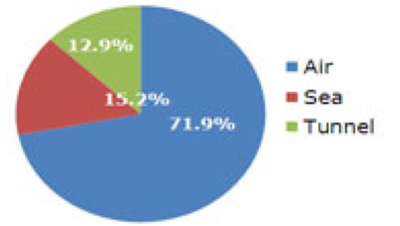 If you charge it, they will not come

However, more troubling is the gradual decline of tourists from key markets, especially North America, whose visitors have brought the highest spend whilst in the UK, a number that is also declining.

While the past three years have provided ample reasons for visitor declines, many believe that increasing taxes on travelers at a time of economic contraction is certain to exacerbate an already difficult situation. Further APD increases are seen as contributing to a continued decline.

Change in annual number of inbound visits by region of world 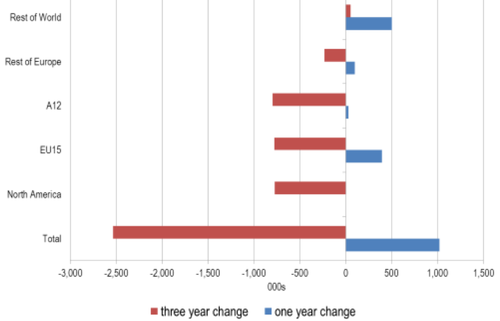 While the APD may have raised GBP2.5billion, research “shows that the size of the [UK’s] heritage-tourism sector is in excess of GBP12.4 billion a year and supports an estimated 195,000 full-time jobs – this makes the sector bigger than the advertising, car or film industries.” Whether or not increased APD amounts will permanently alter the precarious balance of traveler cost/benefit is still a matter of conjecture, but many in the tourism industry are becoming ever more wary that it is a bad bargain for the nation.

The quixotic nature of multiple UK policies stands in contrast to much of the rest of Europe, where visitor numbers continue to climb. France continues to be the world’s most popular destination and has posted year-on-year increases. In 2010, Germany had a record year for tourist arrivals.

Not alone, but intransigent

Britain is not alone in promoting policies that appear to damage a major industry and source of revenue. Increasingly operators in the US are calling for a revision of the tight post-9/11 visa rules that are restricting potential visitors to the US. And others in Europe have considered and/or imposed additional taxes on aviation.

Nonetheless, the increasing costs and static aviation infrastructure in the UK have combined to make it, for many, the poster child of policy mismanagement. And there appears to be little hope for a near term reconciliation between the parties involved.