The strong growth at UAE airports continues, with Dubai and Abu Dhabi leading the way. The UAE General Civil Aviation Authority (GCAA) reports that air traffic movements in the country grew at an “unprecedented” rate of 12.8% year-on-year over Sep-2010, with 52,691 aircraft movements in the month. This follows on from an 8.7% year-on-year increase in aircraft movements Aug-2010. (Note: traffic figures have been skewed by the shifting of Ramadan into August, which was partially responsible for the slowdown in that month).

Dubai had 24,068 air traffic movements, followed by Abu Dhabi, the base of UAE national carrier Etihad Airways, with 7763 movements. Sharjah International Airport, where low cost carrier Air Arabia is based, ranked third with 5350 movements. Al Maktoum International Airport - potentially the largest airport in the world once construction is completed - had just seven cargo flights, down from 20 last month. The airport opened for cargo operations in Jun-2010.

There were 11,674 overflights in UAE airspace during the month. Local traffic between UAE airports totalled 3194 flights.

During Sep-2010, RAK Airways relaunched scheduled operations. The carrier, operating from Ras al Khaimah airport, launched services to Kozhikode near the end of the month. The carrier launched services to Jeddah in Oct-2010 and announced plans to  at the end of the month, and has announced plans to operate five weekly frequencies to each destination over the 2010/2011 winter schedule.

Driving Dubai's 25% passenger surge last month was a 247% increase in Eastern European passengers (albeit off a small base), a 33% surge to/from Asia Pacific and a 25% increase to/from Africa.

The growth reflects the priorities of the UAE’s airlines. Connecting traffic between Western Europe and the Asia Pacific is a profitable market for UAE carriers, as are the itinerant worker and VFR markets in North Africa and the Indian sub-continent. Emirates has led the way among UAE carriers, launching services to Amsterdam, Prague, Tokyo, Dakar (Senegal) and Madrid this year. 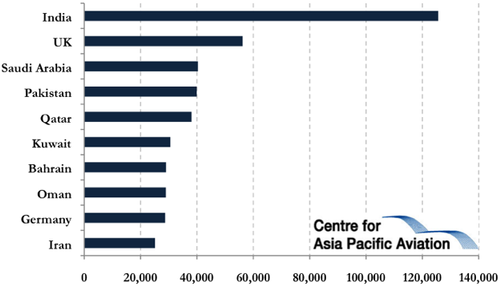 Regional traffic is also being reinforced, with carriers adding new routes and reinforcing existing ones with more frequencies. Etihad Airways has launched new routes to Baghdad and Erbil this year, and plans to operate to Cairo from Nov-2010. Emirates has added 129 weekly frequencies to destinations in Saudi Arabia, while Air Arabia has launched its new base in Alexandria and plans to add a base in Jordan. The LCC has also added new services from Sharjah to Najaf and Nairobi, as well as a new route to Hyderabad, as the carrier continues its push into the Middle East-India market. 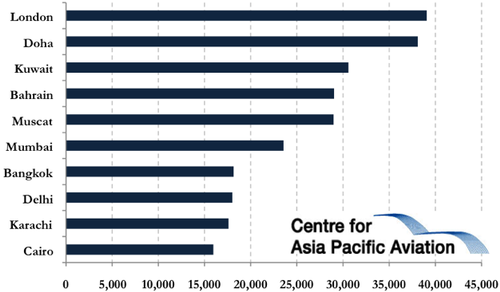 Europe’s financial capital of London remains the most important destination from UAE airports. Dubai accounts for 31,000 of the 39,000 weekly seats operated to/from UAE airports to London. GCC capital cities are the next four most largest destinations, followed by major cities in the Indian sub-continent.