When it was disclosed that Istanbul’s Atatürk Airport was to close to passenger operations and to be replaced by Istanbul Airport (of which TAV Airports would not be involved in the financing or developing) it looked not only like the end of an era for TAV, but that the firm would be severely impacted financially.

It might still be early days but financial results from 1Q2019, the quarter in which the transition was finalised, indicate that TAV has not just rolled over and given up the fight.

In addition to positive financials, the acquisition of a large stake in Turkey’s third busiest airport, an ever-growing services provision (including at the new airport) and the evaluation of future projects across Europe and Africa demonstrate that it is still very much alive and kicking.

In a period when its cornerstone asset, Atatürk Airport, ceased handling commercial flights, which have been transferred to the new Istanbul Airport in which TAV has no direct financial interest (but see below for qualification on that), it managed to increase EBITDA by 2% and net profit by 233%.

This is indicative of TAV’s diversification, that of a company which claims that its ‘post-Istanbul’ services network now comprises 75 airports in 21 countries.

The hit from cut back services at Atatürk is evident in the reduction of 14% in income from duty-free sales over the period.

However, that is the only evident negative: revenue growth overall was 9%, and 17% coming directly from aviation charges to airlines.

In the first quarter of 2019 international passengers increased 10% compared to last year, boosted by the addition of Antalya Airport. In May-2018 TAV Airports obtained approval from the Turkish Competition Authority for the acquisition of a 49% stake in Antalya Airport, securing a EUR300 million loan to be used to acquire the stake from IC Ictas.

It is clear this acquisition was a key plank in TAV’s strategy to offset losses from the closure of Atatürk.

Antalya is the third busiest airport in Turkey after the two Istanbul airports. With 31.5 million passengers in 2018, recording a growth rate of 21.7%, busier even than Ankara (the capital’s) Esenboğa Airport.

In 2017 growth was +38.2%, but that period was a reactionary year to the events (terrorism and an attempted military coup) of 2016, when tourism plummeted. Antalya is a major tourism gateway to the Turkish Riviera, the country's biggest international sea resort, with up to 15 million visitors each year. 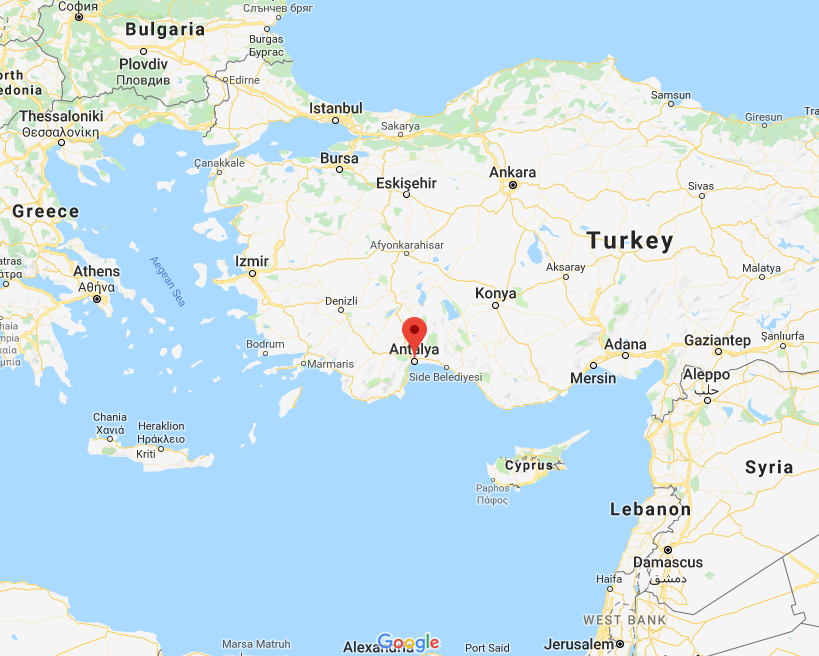 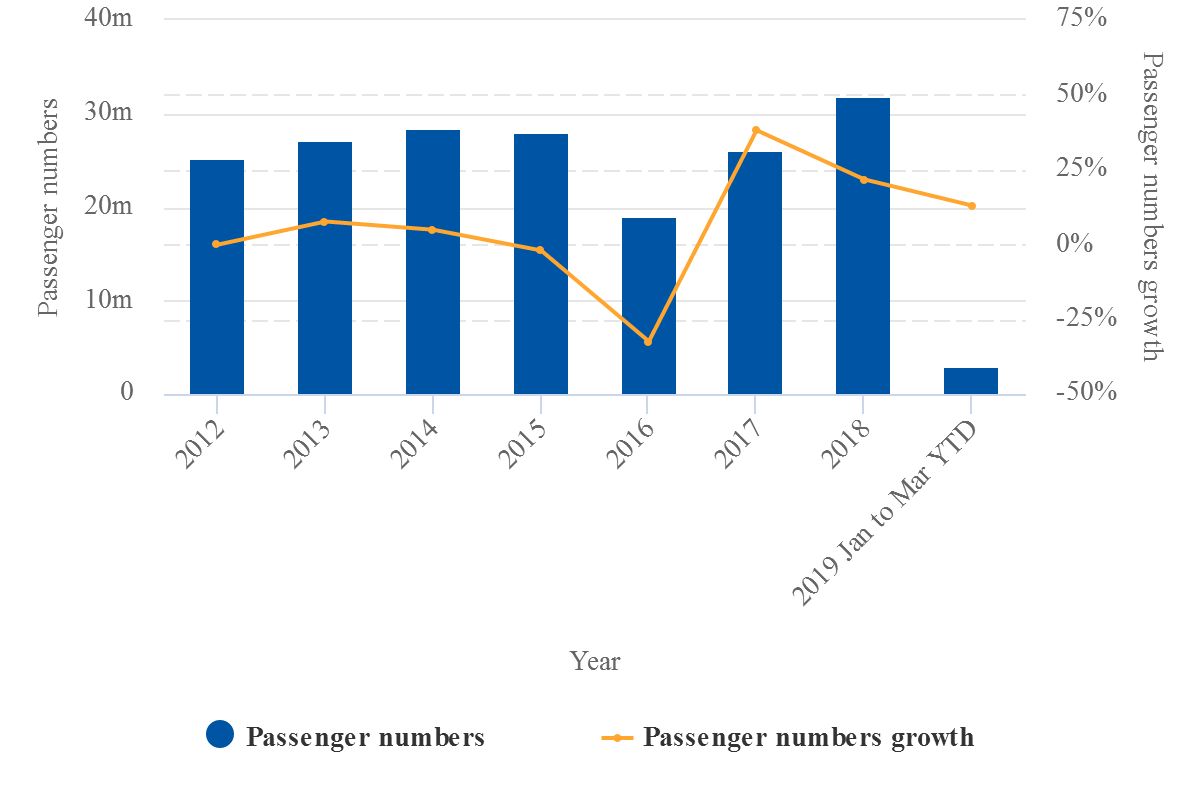 In 1Q2019 TAV Airports’ revenue increased by 9% and reached EUR270 million. Revenue was positively affected by weaker EUR/USD exchange rates by way of USD-based revenue in Istanbul and Georgia.

EBITDA increased by 2% and reached EUR98 million. EBITDA was positively affected by Istanbul’s higher EBITDA margin and negatively affected by the inclusion of Antalya’s off-season results for the first time (from May-2018).

The (calculated) EBITDA margin of 36.5%, however, remains quite modest for an enterprise of TAV’s size and scope. It can be influenced by restrictive regulation and charging regimes, although there can be other, temporary reasons such as the Antalya off-season influence mentioned above.

Net income (profit) increased by 233% and reached EUR24 million. TAV notes that it significantly improved with the drop in foreign exchange loss in 1Q2019.

TAV says its ‘post-Istanbul’ portfolio consists of 14 airports that it operates in seven countries with an EBITDA between EUR330 and EUR350 million, and approximately 90 to 95 million passengers served.

They are in Turkey, Georgia, Tunisia (TAV Tunisia), the recently renamed Republic of North Macedonia, Latvia, Saudi Arabia and Croatia. The map below identifies their location. 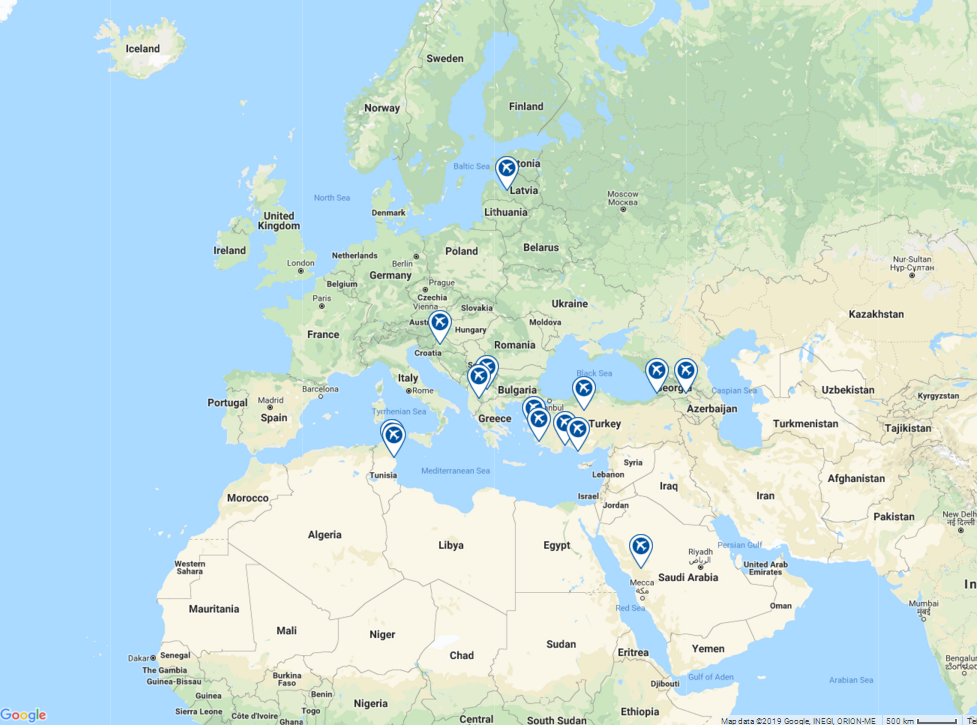 Beyond those airports, the services network comprises 75 airports in 21 countries. These are airports in which TAV engages in ground handling and other services such as duty-free provision, IT, and security through named TAV divisions (Operations Services, Technologies, Private Security) and other affiliated companies (Havaş, ATŰ, BTA).

TAV evaluating “up to 10 projects"

With the inclusion of Antalya in its portfolio in 2018 TAV says it has already recovered 25% of the EBITDA loss from its exit from Istanbul.

In addition to organic growth of the existing portfolio, it will also be looking to grow the services offering that comprises 37% of its revenue and will be looking for profitable inorganic growth opportunities.

At present it is evaluating close to 10 different projects in CIS countries, Africa and Eastern Europe, with a focus on value creation.

One of them could be in Ghana, where the Ministry of Aviation has proposed that TAV Airports be considered for a terminal management contract or a concession agreement for Accra Kotoka International Airport. That proposal came in reaction to TAV Airports' request to manage the airport "to help bring about the physical development of the airport enclave".

The company's report goes into some detail about the transfer of facilities from Atatürk Airport to Istanbul Airport. The commercial passenger traffic of the former was transferred to the latter on 06-April-2019. TAV Airports had three main objectives during the transfer.

Compensation claims continue over Atatürk as CEO looks back

Discussions with the State Airports Authority (DHMI) – advised by KPMG on TAV’s side and by PWC on the side of DHMI – on the compensation due to TAV from the early closure of Atatürk are continuing.

TAV is on record separately as saying (08-Apr-2019) that it expects to receive a formal notification of this compensation from DHMI. It has also reiterated that it has the right to operate the Atatürk Airport complex for a period of 15.5 years until 02-Jan-2021.

Why it should persevere with an airport that is destined to become no more than a freight and MRO centre and not just take the money is not clear.

It is possible that TAV perceives that further stages will not be added to the new airport for whatever reason(s) (it attracted very strong environmentally led resistance) and that DHMI will have to fall back on Atatürk in the same way as the Thai authorities had to do with Don Mueang Airport in Bangkok; but that can be no more than speculation.

There is perhaps a hint of nostalgia for Atatürk in the CEO’s Message: “I would like to use this opportunity to thank all our employees one more time, who through their selfless efforts grew Istanbul Atatürk Airport five times, turned it into the 10th best airport in the world and the fifth largest airport in Europe. With the dedication and social capital of our employees and the trust of our shareholders and business partners we built a global brand.”