Turkish Airlines suffered wider losses in 1Q2014 as a drop in unit revenues negated the benefit of lower unit costs (both in USD terms). Capacity growth, in ASKs, was more than 21%, but revenues grew by only 15%. RASK was particularly weak in the domestic market, due to capacity growth (especially at Sabiha Gökçen, where it competes with LCC Pegasus) and currency weakness, and was also affected by the shift of Easter into April in 2014.

THY says that booking trends indicate a positive demand outlook and yield pressure should ease in 2H2014 after further weakness in 2Q2014. Losses in the seasonally weak first quarter are not unusual and the year 2014 should certainly end with THY in the black, but it looks likely to see a lower operating profit than in 2013.

No company that grows at double digit rates of volume growth can guarantee an ever upward path of profitability, but CEO Temel Kotil highlighted his priorities when he told analysts and investors at a presentation in Istanbul that the most important things were "profit, profit, profit".

Note that, while THY's official reporting currency for its statutory accounts is TRY, its functional currency is USD and management prepares all accounts in USD before translating them into TRY for statutory reports. We will present our analysis using the USD figures provided by the Group.

ASK growth of 21.5%, faster in the domestic market 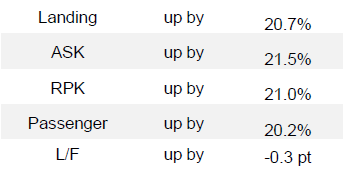 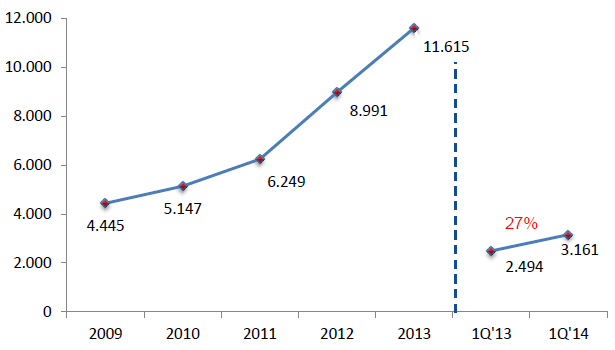 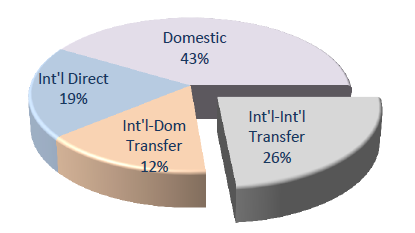 USD revenue growth of 15% year on year in 1Q2014 did not match the 21.5% increase in ASKs. This was the result of the failure of scheduled passenger revenues to keep pace with the growth in scheduled ASKs. Cargo revenues grew by 22%, marking THY's cargo business out from other airline groups, where cargo has been in decline, although this was slower than the 27% growth in cargo tonnes.

Scheduled passenger revenue per ASK fell by 8% year on year, with THY citing a number of factors to explain this weakness. These included yield pressure relating to local currency depreciation in a number of regions, additional capacity at Istanbul Sabiha Gökçen, growth in the share of transfer passengers, the move in the timing of Easter from 1Q2013 to 2Q2014 and political tensions in Russia, Ukraine and Thailand. 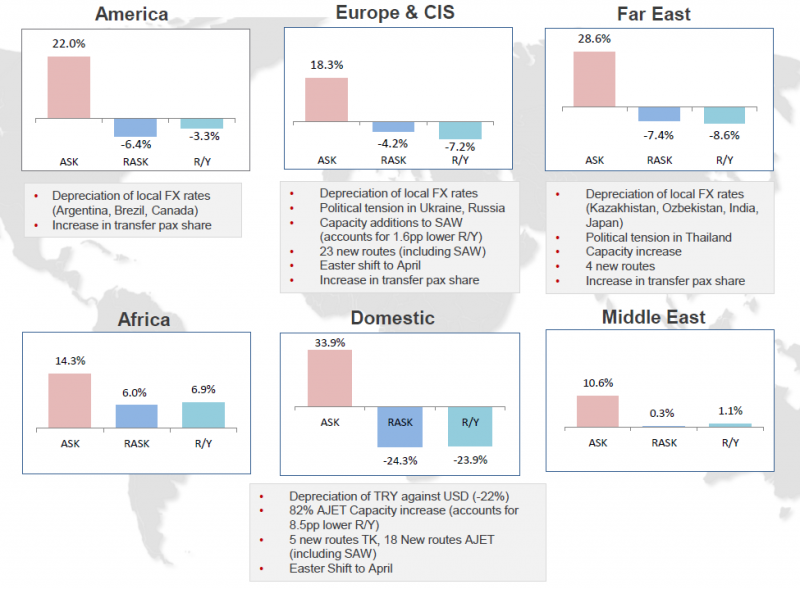 Nevertheless, capacity increases at Sabiha Gökçen (SAW), resulting from the lack of airport capacity at Istanbul Ataturk, have increased the level of direct competition with LCC Pegasus Airlines and this has added to downward yield pressure in the domestic and Europe markets.

Mr Kotil said that capacity growth at SAW was the main reason for falling yields in 1Q2014, but that the Group needed to achieve "critical mass" of capacity at the airport.

This growth at SAW looks set to continue: according to data from OAG, Pegasus increased its number of seats at SAW serving Europe by 22% year on year in the week of 12-May-2014, while THY grew seat numbers by 74% in the same market. Pegasus' share of seats in this market from SAW is 71%, down from 76% for the same week a year earlier, while THY's share is up to 24% from 18%.

The Group will have 42 destinations from SAW in 2014, compared with 30 in 2013. Subsidiary brand Anadolujet is increasing the number of domestic routes from 16 to 22 at SAW and Turkish is increasing its European routes from 10 to 14. 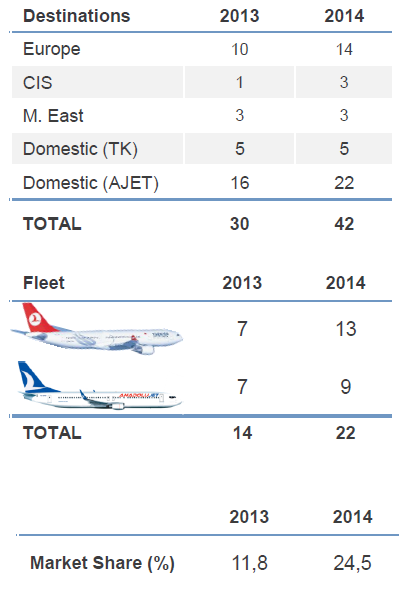 Operating costs, in USD, increased by 17%, which was less than the increase in ASKs, but faster than the growth in revenues and this led to the lower operating result in 1Q2014. The growth in costs was moderated slightly by fuel cost growth of only 15%, while non-fuel costs increased by 18%. Labour cost growth was limited to just over 3% (helped by the weaker TRY versus USD), but landing, navigation and air traffic charges grew by 30% due to price increases. Passenger services and catering costs, up 29%, also grew faster than ASKs due to price increases and an enhanced catering concept. 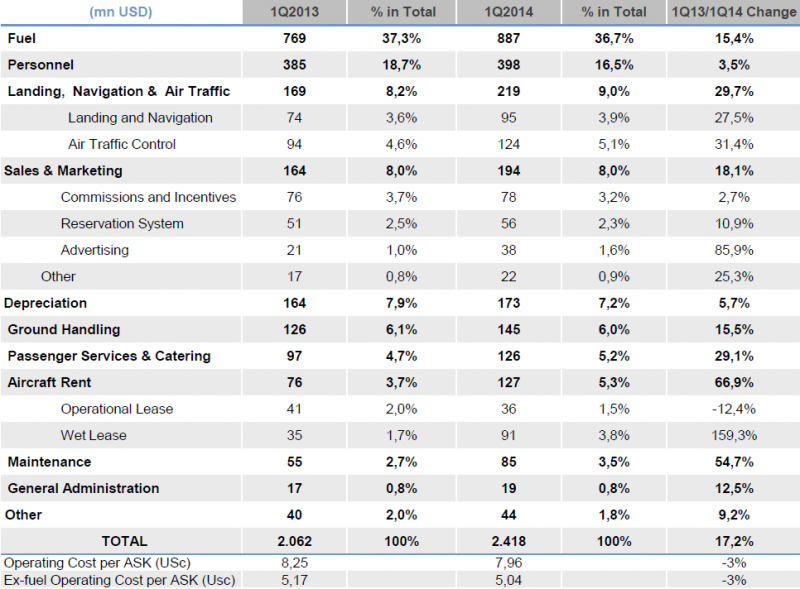 The expansion will focus mainly on the narrowbody fleet, which is set to grow by 160 aircraft by 2021, while the widebody fleet is currently planned to grow by 33 aircraft.

THY has for some time been considering a further widebody order and so the widebody numbers could be revised upwards, but its fleet planning is driven by the fact that more than 40% of global international traffic is within narrowbody range of Istanbul. 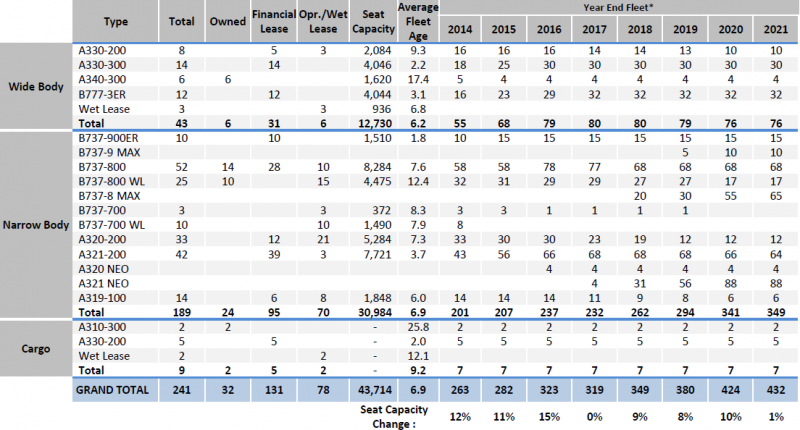 THY continues to capture a growing share of world passenger traffic flows and is driving forward with double digit growth in capacity and revenues. It already flies to more countries (207) than any other airline and will focus future growth in frequency increases. It is profitable and cost efficient compared with long-haul peers and its longer term future looks assured.

However, Turkish faces a near term challenge to increase its profitability. In FY2013, its operating margin (based on its USD accounts) fell from 7.5% to 5.9% as a fall in RASK was unable to offset a stable CASK. In 1Q2014, CASK fell but RASK fell further and THY has now had three successive quarters when the year on year growth in RASK has under-performed against the growth in CASK.

The guidance for RASK to fall more than CASK already suggests that THY will not increase its operating profit in 2014 relative to 2013. Although there are three quarters of the year still to come, the 1Q results make this challenge look even harder.

Turkish Airlines year on year growth in USD-reported RASK and CASK by quarter: 2013