Until 2014 Turkey was one of the most reliably fast-growing air traffic markets in Europe. In 2015 passenger numbers levelled off, and in 2016 traffic is set to decline. The impact of geopolitical events, including a series of terrorist attacks, the civil war in neighbouring Syria and the failed coup attempt in Jul-2016, has weighed heavily on demand for international travel to/from Turkey.

Foreign airlines switched capacity away from Turkey in summer 2016, but the country's two largest operators – Turkish Airlines and Pegasus Airlines – continued to grow. However, following years of double-digit growth by both, Turkish Airlines and Pegasus Airlines are taking unusual steps this winter. According to data from OAG, Turkish looks set to implement year-on-year capacity cuts, while Pegasus appears to be planning flat capacity for the period from Nov-2016 to Mar-2017. It seems likely that both airlines will again cut their growth targets for 2016.

Moreover, Pegasus is seeking wet-lease customers for six of its current fleet of 73 aircraft. Perhaps more significantly, Turkish is to reschedule 165 aircraft deliveries planned for 2018-2022, cutting its planned fleet size in 2021 from 439 to 400.

The weakness of demand in Turkey gave some apparent credibility to erroneous reports that Pegasus had made its entire fleet of 73 aircraft available to the ACMI/wet-lease market.

In fact, while it is incorrect that Pegasus is seeking to lease out its entire fleet (57 Boeing 737-800 aircraft and 16 A320 family aircraft, according to the CAPA Fleet Database), it has wet-leased two of its 737 fleet to Flynas and is seeking opportunities to wet-lease up to four more of its fleet.

This total of six aircraft that Pegasus views as essentially surplus to its current needs represents 8% of its fleet.

THY has also trimmed back its planned fleet totals and seat total numbers for each year of the plan.

Turkey pax were flat in 2015 after years of double-digit growth; set to fall in 2016

Turkey has been one of Europe's leading growth markets for air travel. According to data from the country's airport authority, DHMI, passenger numbers grew at a compound average growth rate of 14% pa from 2003 to 2014, with growth rates typically comfortably double-digit in almost every year.

Even in the 2009 recession passenger growth remained positive. The CAGR for the domestic market over the period 2003 to 2014 was 22% pa – twice that of the international market.

Total passenger growth slowed in 205 to just under 8%, although domestic growth was a still impressive 14%, while international growth fell to below 5%. Geopolitical concerns over rising tensions in the Middle East were starting to show themselves in weaker international demand.

Turkish Airlines' 2Q2016 results presentation included forecast passenger numbers for the Turkish market from DHMI. This forecast anticipated that total passenger numbers in Turkey would be just below flat in 2016 (falling by 0.1% to 132.5 million). DHMI forecast that domestic passenger numbers would grow by 4.3%, but that international traffic would fall by 2.6% in 2016.

Source: CAPA - Centre for Aviation, DHMI (from Pegasus Airlines IPO prospectus to 2011 and from Turkish Airlines 2Q2016 results presentation for 2012 to 2016e).

Traffic decline in 2016 breaks the link with GDP

As in most aviation markets, passenger growth rates in Turkey have risen and fallen broadly in line with the rise and fall of GDP growth rates. However, Turkey's air traffic growth has typically been much stronger relative to GDP growth than is the case for the global aviation market as a whole. In the deep recession of 2009 Turkish GDP growth fell to -4.8%, but total passenger numbers still increased by 5.5%.

In 2016 the IMF forecasts Turkish GDP growth at a still healthy 4.0%, but air passenger numbers are expected by DHMI to fall. The slump in air traffic demand is not directly related to the state of the economy, but has been caused by a series of major geopolitical events affecting Turkey.

Source: CAPA - Centre for Aviation, DHMI (from Pegasus Airlines IPO prospectus to 2011 and from Turkish Airlines 2Q2016 results presentation for 2012 to 2016e), IMF.

Indeed, the DHMI forecast for 2016 included in THY's 2Q2016 presentation now looks to be optimistic.

Figures for the first nine months of 2016 indicate that total passenger numbers were lower by 7.0% year-on-year, dragged down by an 18.9% plummet in international passenger numbers. Domestic traffic was up by 4.9% in 9M2016, still much weaker than the 14.1% increase achieved in 2015, but not far off the DHMI forecast of 4.3% for the full year.

Passenger numbers in Turkey were growing until Mar-2016, but have been declining year-on-year since Apr-2016.

The slump in air traffic reflects a weakening demand pattern as a result of geopolitical events and concerns.

There had been a number of terrorist attacks in Turkey in 2015, including two bombs detonated in the capital Ankara in Oct-2015 (killing more than 100 people), an explosion at Istanbul Sabiha Gökçen Airport in Dec-2015 and a bombing in the Istanbul metro – also in Dec-2015.

In 2016 the number of terrorist incidents has increased, and the protracted civil war in neighbouring Syria has increased the level of concern for international passengers travelling to the region. Turkey has been under rocket attack by the so-called Islamic State from bases in Syria in 2016.

Other Turkish cities, including Diyarbakir, Dürümlü and Gaziantep, have also been attacked. In addition, there was an attempted coup d'état by sections of the Turkish military in Jul-2016, which quickly collapsed, but which also led to the temporary closure of Turkish air space and significant flight cancellations.

The fall-off in demand for air travel in Turkey has affected all operators in the market. However, its two leading participants, Turkish Airlines and Pegasus Airlines, have been relatively less badly affected.

The brunt of the collapse in demand has been borne by foreign airlines, who have switched significant capacity away from Turkey and into other markets (including Spain).

Nevertheless, by comparison with their historical growth patterns, both THY and Pegasus are undergoing severe slowdowns.

Load factor declines for both THY and Pegasus in 2016

Both performed better until May-2016, suffering domestic load factor falls from Jun-2016.

Both have suffered international load factor declines throughout 2016.

THY and Pegasus lowered capacity growth plans in Aug-2016; both look set to lower once more

Turkish Airlines revised its guidance for FY2016 in Aug-2016, by which time the slump in demand in Turkey was well established.

THY's revised ASK target was still fairly aggressive by comparison with most European airlines, but a significant slowing from its average over the decade to 2015, when THY had increased its ASKs at an average rate of 18% pa, doubling its ASKs every four or five years.

Pegasus also said in Aug-2016 that it expected domestic load factor to be stable but international load factor to fall by 4ppts-6ppts – both targets broadly in line with its 8M2016 results.

For both THY and Pegasus the data from OAG indicate that their capacity growth plans for FY216 will be even lower than the revised targets announced in Aug-2016. Given the poor development of load factor throughout 2016 so far, perhaps this is not surprising.

THY to cut capacity this winter

According to OAG, THY will increase its scheduled ASKs by 10.0% (and seat numbers by 5.7%) in 2016, rather than the 13% announced. It has not announced a change to its 2016 guidance, but this suggests that ongoing demand weakness has forced it to adapt its plans once more.

THY has not given any targets for 2017, but data filed for the first 11 weeks of 2017 suggest that this 2%-3% rate of capacity cut will continue in the early part of next year, at least during the winter season. This capacity cut is essentially unprecedented for THY – certainly over such an extended period of weeks/months. 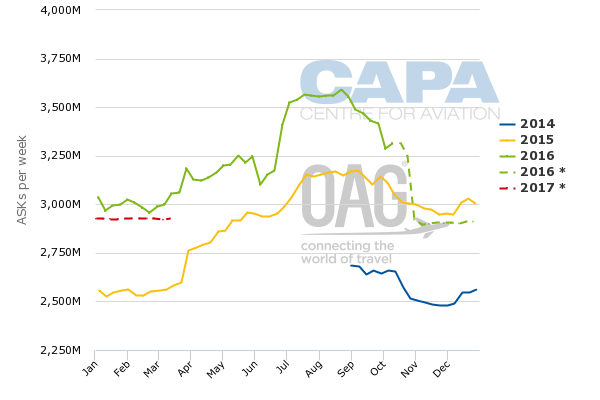 For Pegasus, OAG data indicate that growth is set to be 7.2% for ASKs (and 7.0% for seat numbers), compared with its announced target of 9%-11%. As with THY, Pegasus has not publicly changed its guidance but a further downward revision must be expected.

Pegasus is set to continue with approximately 10% ASK growth in Oct-2016, but will implement little or no ASK growth in Nov-2016 and Dec-2016, according to OAG.

As with THY, Pegasus has not given any targets for 2017, but data filed for the first 11 weeks of 2017 suggest that it plans ASK growth of less than 1% throughout the winter 2016/2017 season. This period of flat capacity is unprecedented for Pegasus.

Against this background, the (erroneous) reports of Pegasus' decision to make its entire fleet available to the wet-lease market emerged into an atmosphere of feasibility. 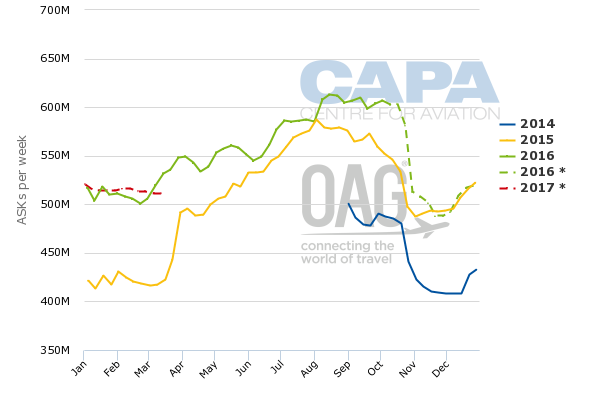 Seat numbers in the seasonal winter low of Jan-2015 were up by 14% year-on-year and the Jan-2016 low period achieved a similar growth rate. However, the low week of Jan-2017 looks set to suffer a 3% cut in total seat capacity in the Turkey market and the available data indicate that capacity will be lower year-on-year through to Mar-2017. 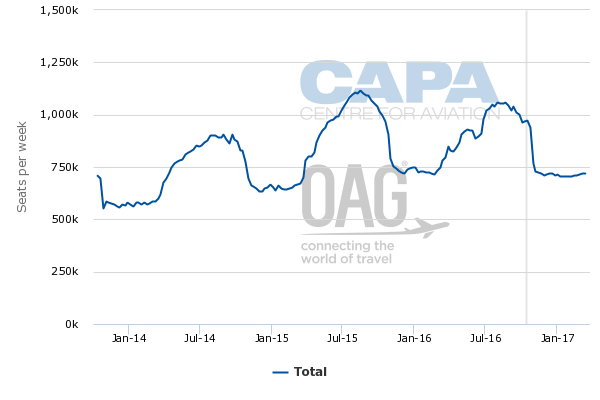 The capacity cuts in the overall Turkish market in summer 2016, in spite of continued growth by THY and Pegasus, were unprecedented in recent years. Even more extraordinarily and in spite of capacity cuts by foreign competitors, THY now appears to be about to cut capacity this winter, and Pegasus looks set to maintain its capacity broadly at last winter's levels.

The underlying fundamentals remain positive in terms of GDP development and the relative under-penetration of air travel in Turkey, coupled with a broadly positive outlook for aviation infrastructure.

Summer 2017 capacity plans, both from Turkey's leading airlines and from foreign airlines operating into the country, are not yet known. Only when these plans are finalised will it be possible to begin to assess the prospects of a full market recovery to the strong growth that it has enjoyed for so many years.