In 2012, Turkish Airlines saw its operating profit grow almost threefold, with revenues up 26% on passenger capacity growth of 18%. It has the youngest fleet of any significant network carrier in Europe and its 7.0% operating margin puts it behind only Ryanair and easyJet. This financial success is built on one of Europe’s most efficient cost structures and a very productive work force. THY’s fleet of 211 aircraft will be expanded by the recently announced order for 117 Airbus narrowbodies to add to existing orders for narrow and widebodies from both Boeing and Airbus.

In 2013, Turkish Airlines plans a further 20% capacity increase in pursuit of its expansion strategy based on increasing transfer traffic and is seeing particularly strong growth on routes to Latin American and Africa this year. It does not expect a unit revenue increase, so CEO Temel Kotil will need to engineer a fall in unit costs if profits are to continue to climb. This will not be easy, given likely fuel cost increases and that 2012 was the only year to see a fall in ex fuel unit costs since 2007.

Revenues have been on a strong upward curve for a number of years, but profits had been on a downward trend since the 2009 operating profit peak before 2012 saw a recovery in both operating profit and net profit to record levels. 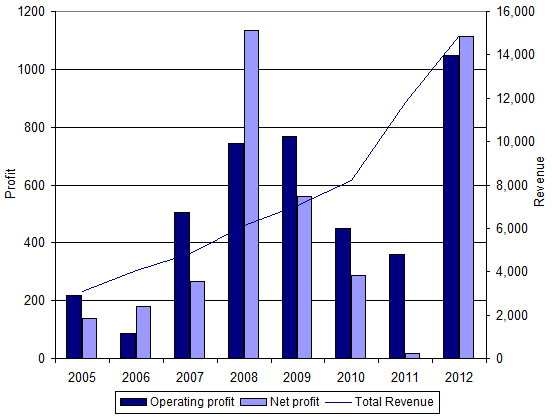 THY is now one of Europe’s most profitable airlines

Margins have varied significantly since it embarked on its growth strategy in 2006, between 2% in 2006 and 12% in 2008, but, with a 2012 operating margin of 7.0%, Turkish Airlines is now one of Europe’s most profitable carriers, behind only Ryanair and easyJet. 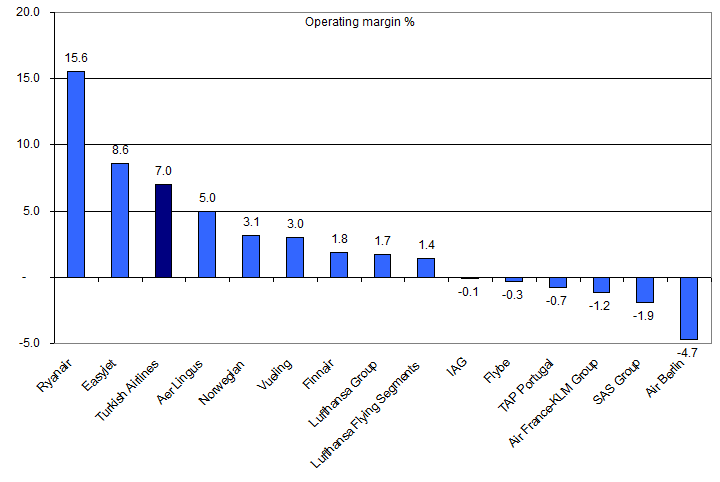 Debt levels back under control

Debt levels increased sharply after 2009 as Turkish Airlines rapidly grew its fleet in the face of falling profits, but the increase in debt in 2012 was relatively modest. Its net debt of TRY6,835 million at the end of the year was 126% of its book equity value, down from 138% for 2011.

Adding capitalised operating leases at eight times annual payments, the adjusted net debt figure of TRY9,338 million was 173% of equity, down from 209% in 2011. These gearing levels are quite high compared with the fairly recent past (in 2009, gearing was 50% and adjusted gearing 114%), but are coming down again.

Turkish Airlines is sometimes referred to as the fourth Gulf carrier, as it aggressively empowers its hub expansion. It has grown its capacity (ASK) by an average annual rate of 18% since 2005, with passenger traffic (RPK) growing at an average of 20% p.a.

In 2012, Turkish Airlines’ transfer passenger numbers grew by 30% to reach 16.5 million, 42% of the total. International to international transfer passengers grew by 44% to reach 23% of the total number of passengers. This reflects the carrier’s strategy to use its Istanbul hub to tap into east-west global traffic flows to connect its narrowbody catchment area of Europe, the Middle East and North Africa with the Americas and Asia, in addition to offering connections to passengers flying between the Americas and Asia. 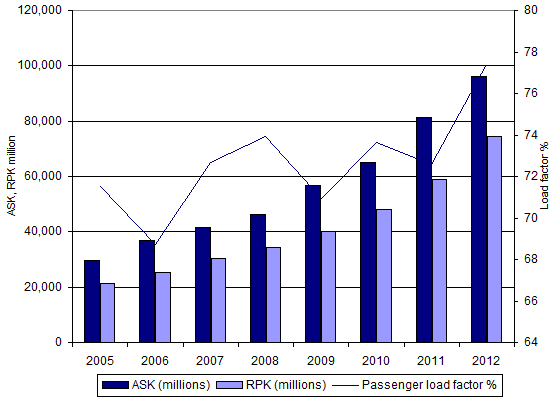 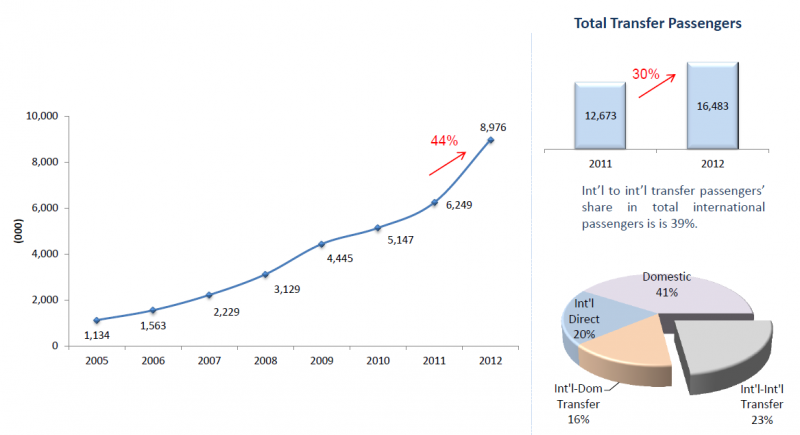 Load factor, while higher in 2012 than in 2005, has not shown such a consistent upward curve over recent years, probably a result of the high number of new routes. Nevertheless, load factor grew by an impressive 4.8ppt in 2012, a significant factor in the improved profitability of the group. Load factor gains were particularly strong on routes to the Far East and the Americas. 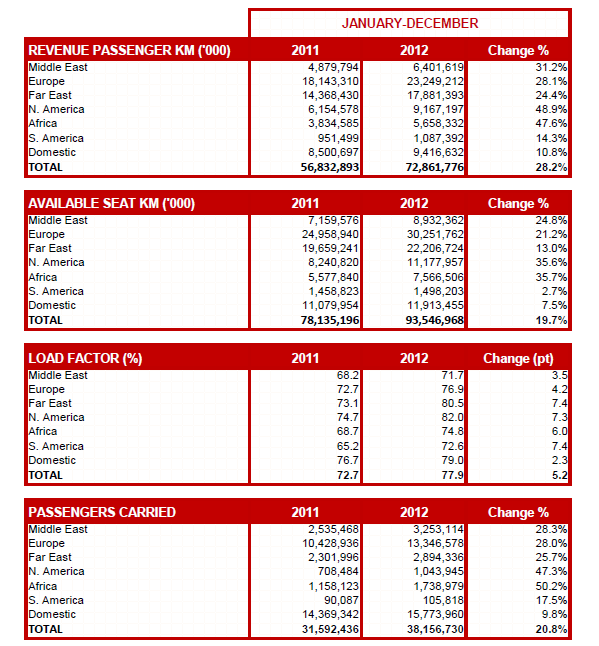 Turkish Airlines’ transfer strategy has fuelled the company’s growth in recent years, which has also been assisted by the faster growing Turkish economy relative to the rest of Europe. From 2006 to 2012, THY more than doubled its share of AEA scheduled passengers.

In its recent medium term traffic forecasts, Eurocontrol forecast that Turkey will be the fastest growing market in Europe for flights to 2019, with average annual growth of 7.0% p.a., compared with 2.3% for Europe as a whole. 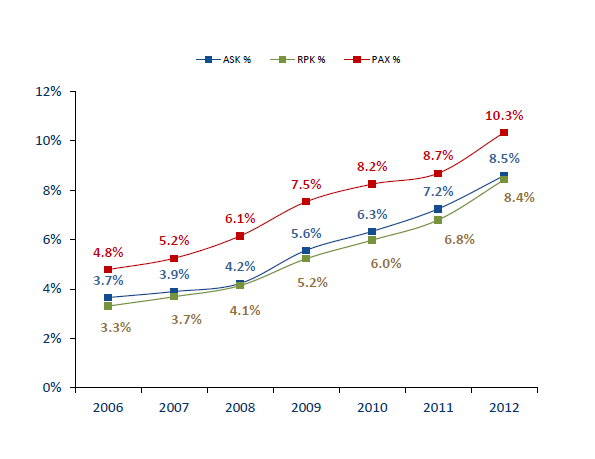 Traffic revenue growth was particularly strong on routes to Africa (up 51%), the Americas (up 48%) and the Far East (up 32%). Europe (excluding domestic Turkey), the carrier’s biggest region accounting for one third of traffic revenues, saw revenue growth of almost 24%. The domestic segment saw the slowest growth, at ‘only’ 16%.

Costs grew more slowly than revenues, in spite of fuel, 37% of total

Turkish Airlines’ operating costs grew by 21% in 2012, slower than revenue growth, but a little faster than capacity growth.

Fuel costs, the biggest category at 37% of the total, grew by 29%. Sales and marketing costs were up almost 31% and this sharp increase may be an inevitable feature of THY’s ambitious growth involving new routes and new destinations as it seeks to build a global brand image and presence. Other cost categories performed well and total ex fuel costs grew by just under 17%, well below capacity and revenue growth.

Turkish Airlines achieved significant growth in capacity and traffic in 2012 with a virtually stable headcount. Labour costs increased by 10%, all driven by increased employee costs per employee. Making the assumption that total capacity, measured in ATKs grew at the same 18.4% rate at which ASKs grew (the company has not yet published total ATK figure for 2012), then labour productivity also grew by 18.4%.

Factoring in the increased pay rates, employee costs per ATK were down by 6.7%, a strong result on a measure where it leads all European airlines with the exception of Vueling and Ryanair.

Moreover, revenues per employee were up by an impressive 26%. 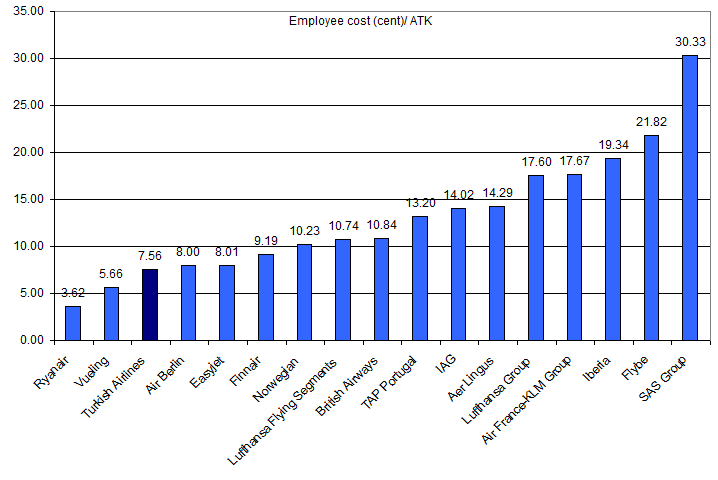 Turkish Airlines currently has a fleet of 211 aircraft, with an average age of 6.6 years. 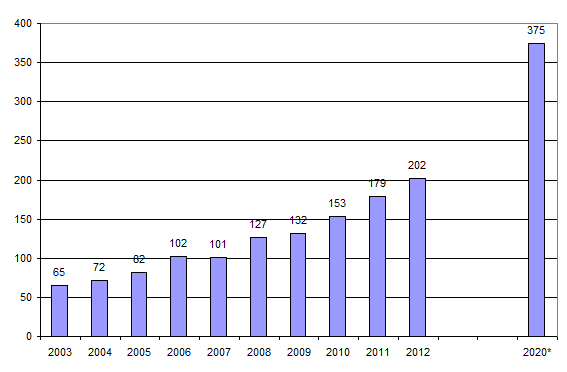 2013 to see further strong capacity growth, but no RASK growth

For the first two months of 2013, it has reported ASK growth of 22.6% and load factor up 4.7ppt to 76.5%. The strongest growth has been to Africa and South America so far this year.

While it has not set a 2013 profit target, it budgets in dollar terms for a 17% increase in revenues from USD8.3 billion in 2012 to USD9.7 billion in 2013 and expects the fuel bill to increase from USD2.9 billion to USD3.7 billion (up 28%). Allowing for some further depreciation of the Turkish lira, this revenue outlook implies that RASK will be flat to slightly down and yield down by a little more in 2013. The anticipated fuel cost increase suggests an increase in fuel costs per ASK of around 8%.

THY will continue to open new routes in 2013, pursuing its global transfer strategy. In percentage terms, the highest growth will be seen in Latin America, where it had only two routes (Buenos Aires and Sao Paulo) at the end of 2012.

In 2013, it will add Bogota, Caracas, Havana and Mexico City. Africa is also seeing significant growth, with 11 new destinations to add to the 33 existing cities, and 13 new destinations are being added to the existing 84 in Europe. 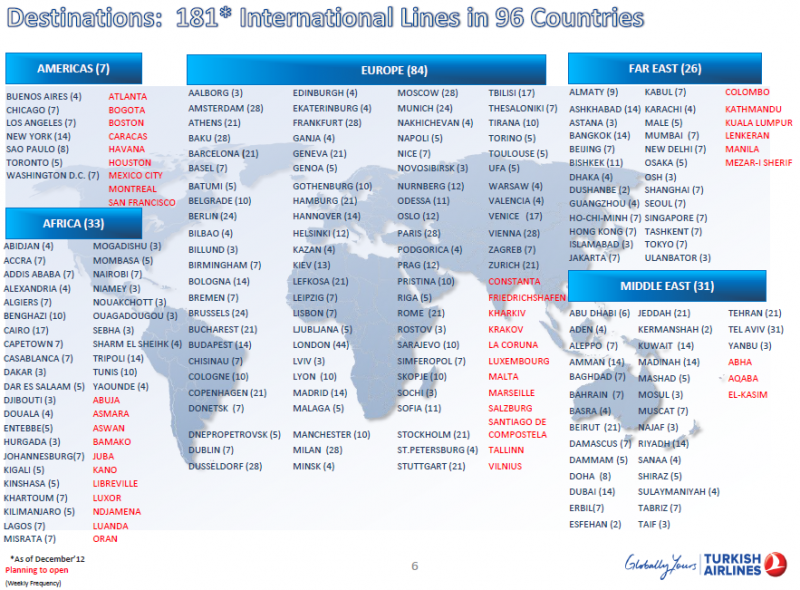 CASK ex fuel fell in 2012, but track record is patchy

In the years of improving profits from 2006 to 2008, Turkish Airlines saw a steep upward movement in RASK while CASK rose less steeply. Ex fuel CASK stayed flat over this period, but then rose steadily from 2008 to 2011 before dipping slightly in 2012. The fall in RASK in 2009 came when capacity grew by 22% and the world fell into a recession. CASK also fell in 2009 and so operating profit held steady, but this fall in RASK is a signal that a high growth strategy can run into trouble when severe economic weakness hits. The fall in operating profit between 2009 and 2011 was the result of CASK rising more rapidly than RASK. Rising fuel costs contributed to this CASK growth, but ex fuel CASK also went up.

The improved control over ex fuel CASK and continued RASK growth led to higher profits again in 2012. If the company is to see a further increase in profits in 2013, it will require another fall in ex fuel unit costs, assuming that THY’s budgeted increase in fuel costs per ASK and slight fall in RASK prove accurate. Its track record of recent years, when it has done well merely to keep ex fuel RASK stable, suggests that cutting it will be a challenge. 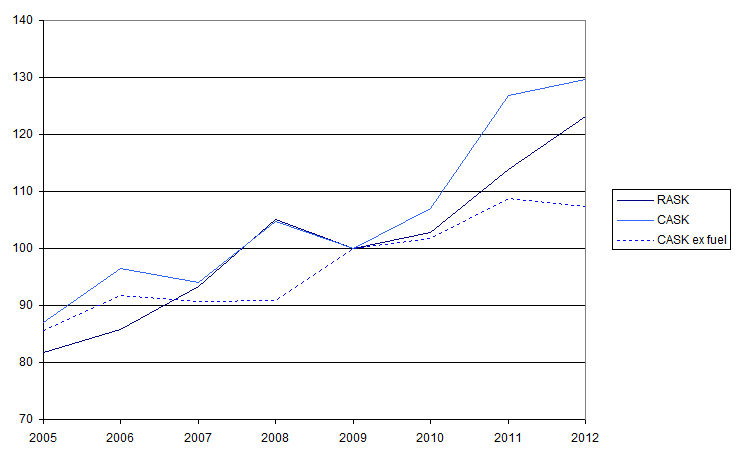 The following chart compares THY’s unit costs (CASK) and average sector length with those of a number of other European competitor airlines. It highlights the very cost efficient nature of Turkish Airlines, which has the lowest unit cost among European network carriers. As noted above, it has very good labour productivity and this goes some way to explaining its cost competitiveness.

Nevertheless, cost efficiency against European carriers is not the whole picture. As THY continues to grow on routes into developing regions such as Latin America, Africa and Asia, its competition is increasingly local carriers in those regions and the Gulf carriers. 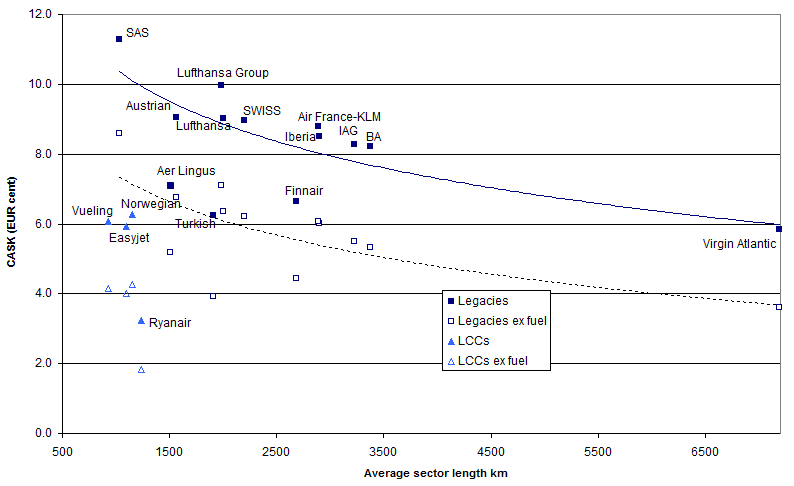 As the company continues to follow its ambitious fleet expansion programme and to add capacity, it should be well placed to maintain this low unit cost structure. However, as noted above, Turkish generally needs to lower its unit costs in order to increase profits and it also faces a challenge in maintaining a positive RASK trend in times of economic weakness.

Maintaining RASK growth is also challenging when pursuing high growth based on transfer traffic, which tends to be lower yield than point-to-point traffic, particularly when faced with strong competition from transfer carriers based in the Gulf.