TUI is expanding its reach further into the Russian market with its new subsidiary TUI Russia, which recently launched services from Moscow Domodedovo in a joint-venture with Russian carrier Kolavia. The TUI-Kolavia partnership will see leisure services operated from Moscow to Turkey, Egypt, Bulgaria, Spain, Greece, Montenegro and Croatia using Airbus A321 aircraft supplied by Kolavia. TUI Russia says it is now the only tour operator in Russia offering flight and holiday packages, giving it a potential advantage in the Russian leisure market.

TUI Russia’s agreement with Kolavia involves Kolavia providing three A321 aircraft for three years. The aircraft have been rebranded in TUI colours with small markings of Metrojet, the name of the TUI-Kolavia JV that was launched on 01-May-2012. TUI Russia itself is a joint venture between TUI and Russia’s Group Capital Management.

TUI Russia and CIS managing director Chris Mottershead reportedly said at a launch press conference earlier this month that TUI spent USD1 million on rebranding the aircraft. Mr Mottershead said TUI has made a wider investment of “tens of millions of dollars” including opening 300 TUI offices across Russia over the past two years. He highlighted the possibility of TUI Russia acquiring Kolavia but said TUI is currently satisfied with the partnership as it now stands. Kolavia was a scheduled carrier but ceased scheduled operations last year after a fatal fire occurred on an aircraft on the ground.

TUI Russia to operate 11 initial routes from Domodedovo base

TUI Russia’s initial network will consist of 11 charter routes across Eastern Europe, Western Europe and North Africa. Only one of its routes, Moscow Domodedovo-Bodrum, is not currently operated by any scheduled carrier from Moscow, so the airline faces high competition on the majority of its initial network, although TUI's strength is in package holidays and not point-to-point services. S7 Airlines and Transaero also have bases at Moscow Domodedovo.

TUI Russia’s initial routes and competitors from Moscow Domodedovo or other Moscow airports: 09-Jul-2012 to 15-Jul-2012

Moscow Domodedovo-Barcelona El Prat and Moscow Domodedovo-Tivat are among the 10 largest international routes from Moscow Domodedovo based on current scheduled capacity (seats) data. Being a leisure carrier, TUI Russia will be able to undercut a lot of its Russian full-service competitors. But it will also compete against Spanish low-cost carrier Vueling on services to Palma de Mallorca, Ibiza and Barcelona. 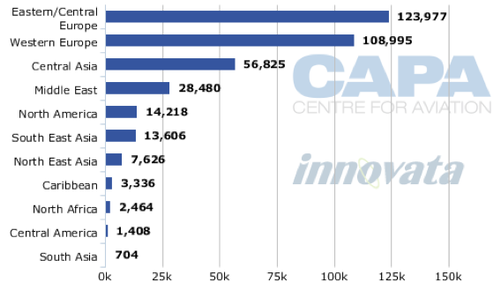 TUI Russia is considering expanding its operation in summer 2013 with new routes potentially to launch from regional centres in Russia as well as from its base at Moscow Domodedovo. Yekaterinburg, Samara and Kazan have been highlighted as potential regional Russian centres on TUI’s radar from which to launch leisure services across Europe.

TUI Russia will need to expand its fleet ahead of launching additional services in 2013 as currently the three A321s it uses from Kolavia are not sufficient to operate all its services. TUI Russia is reportedly currently placing some passengers on Aeroflot, Transaero and Red Wings services due to the capacity shortage.

TUI Russia has also suggested it may add long-haul services from 2013 which would require acquiring widebody aircraft. Services to Asia could be an attractive option for TUI Russia as the Russia-Asia leisure market is expanding rapidly. Thailand in particular is a large and fast-growing destination for Russian tourists.

Outbound tourism from Russia is growing steadily despite tightening regulations. The Russian Tourism Union has said outbound passenger numbers from Russia are growing at an average clip of 15% per year. TUI Russia is in a strong position to benefit from this growing market after the Russian Government introduced stricter regulation on tour operators.

The new requirements are proving to be challenging for tour operators in Russia with at least 13 of 43 Russian tour operators risking losing their federal registrations for not setting aside necessary amounts. TUI Russia has been vocal in support of increased regulation to protect tourists, but the new regulation is beneficial to TUI as some of its competitors in the market do not have as strong a financial backing. Competition between tour companies is likely to decrease with the stricter regulations, benefiting TUI Russia considering it has the support of powerful backers TUI and Group Capital Management.

While TUI may be well positioned among other tour operators in Russia, it will also be competing with powerful carriers such as Aeroflot, S7 Airlines and Transaero. Russia’s main carriers typically operate large charter operations during the peak summer months. These services are often from regional centres as well as from key hubs in Moscow. TUI Russia will need to offer competitive options in order to become a preferred choice. However by offering the combination of tour packages and flights, TUI Russia may have a competitive advantage over others players in the industry that are not offering such a combination.