The NDC (New Distribution Capability) servicing features that are critical to achieving NDC at scale are those than enable refunds and the management of customer and airline-initiated changes, according to new research by the Travelport hosted NDC Leadership Council.

The NDC Leadership Council was formed by Travelport in 2019 to facilitate the industry-wide collaboration required to ensure NDC’s success. It has a geographically diverse group of participating airlines, agencies and corporate travel managers and providers from companies including American Airlines, Qantas, United Airlines, American Express Global Business Travel, AmTrav, dnata Travel, and UBS.

To conduct the study, members of the NDC Leadership Council individually prioritised a selection of 18 discrete servicing features and then, separately, identified the capabilities that have potential to slow progress if they are not supported, which it called ‘blockers’. The results revealed six of the servicing capabilities to be both key priorities and blockers, and hence, considered by the Council to be mandatory for the success of NDC’s rollout. These were:

The results showed strong consensus between agency and airline participants on the six priority capabilities. However, demand for ‘pay using 3D-Secure’, ‘adding an ancillary’ and ‘seat selection’ capabilities was considerably higher among airlines and corporate travel providers. ‘Order history’ was also shown to be in high demand among travel agencies.

“We’ve been delivering NDC for several years and engage our customers at every step of the roll out process to continually improve the NDC shopping, selling, and servicing process” said Kyle Moore, Global Head of Customer Strategy at Travelport. “This detailed research into the priority servicing needs for NDC validates the direction that we have taken to-date. It also highlights the fact that key functionality is in place and that we are now focused on situation-specific features. To that end, we are working with both our airline partners to enable their NDC programs and our agency customers to integrate NDC content into their workflows.”

The latest (virtual) meeting of the Travelport-hosted NDC Leadership Council took place in Q1 2021. In attendance was a group of over 20 of the world’s most influential travel companies from around the globe — including airlines, travel agencies, corporate travel managers, and corporate booking tool providers.

To encourage open, honest dialogue, council meetings are run under Chatham House Rules. This means that while findings are published, participant views by name are not.

Headlining the Q1 meeting agenda was a poll to gauge which NDC servicing capabilities are most important. Understanding this is key to successfully achieving NDC adoption at scale. The Council asked members to rank both the servicing capabilities they consider as ‘blockers’ (i.e., obstacles to NDC adoption), and also the servicing capabilities they consider to be most important. Ranking can be a point of contention, because most Council members find all of these areas important, but some are higher priority. But overall, it provides great insight, and is a valuable, tried-and-tested practice that keeps NDC on track to deliver benefits for the whole industry, and for customers.

The summarised list of servicing capabilities assessed were (in unranked order): 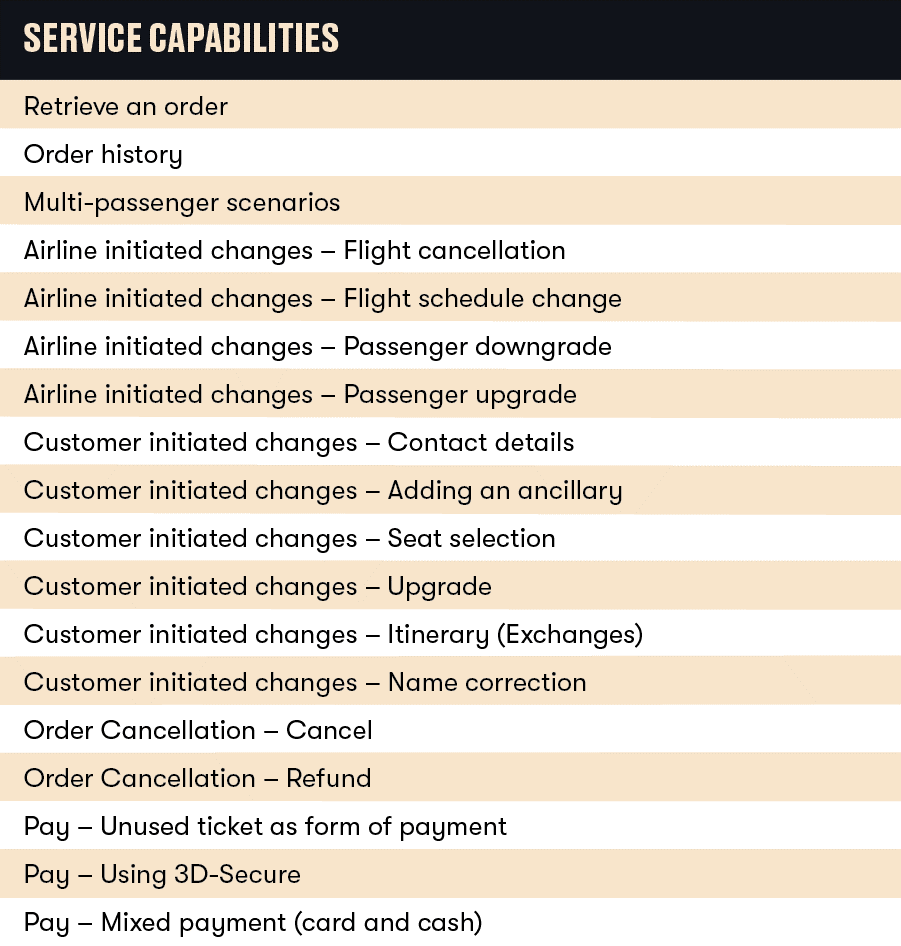 Likewise, the priority servicing capabilities were found to be ranked as follows:

The results show that overall, customer servicing capabilities (notably refunds and exchanges) for NDC bookings, are critical for the adoption of NDC. There’s a strong consensus (80% of members) on the order of priority between quite disparate business types to drive progress. There was a consensus between agency and airline priorities, although some divergence could be seen due to different business model needs, especially between leisure and business focused travel providers.

On the whole, this confirms that the industry is moving in the right direction.

More Details for the Data Enthusiasts…

It’s worth noting that there was strong consensus between agency and airline participants on what the biggest blockers are. Amongst the corporate booking tools and corporate buyers, all items were considered blockers, aside from one booker who did not select Order cancellation — cancel.

There was considerably more demand amongst airline and corporate participants for Pay — Using 3D-Secure. But only two of nine agencies selected this, given most prefer to act as merchant of record themselves. Added to that, 3D-Secure is only mandated in certain markets (like the EU), and then only for e-commerce transactions.

For customer-initiated changes, both Adding an ancillary and Seat selection saw similar higher score from airlines and corporates than agencies. Seat selection and ancillaries are important both from an airline revenue perspective but also to help improve the travel experience for corporate travellers. Order history inverted this trend — being flagged as critical by more agencies. The remaining items were largely consistent across both groups, although three airlines consider Customer initiated changes a blocker, with others regarding this as less critical. 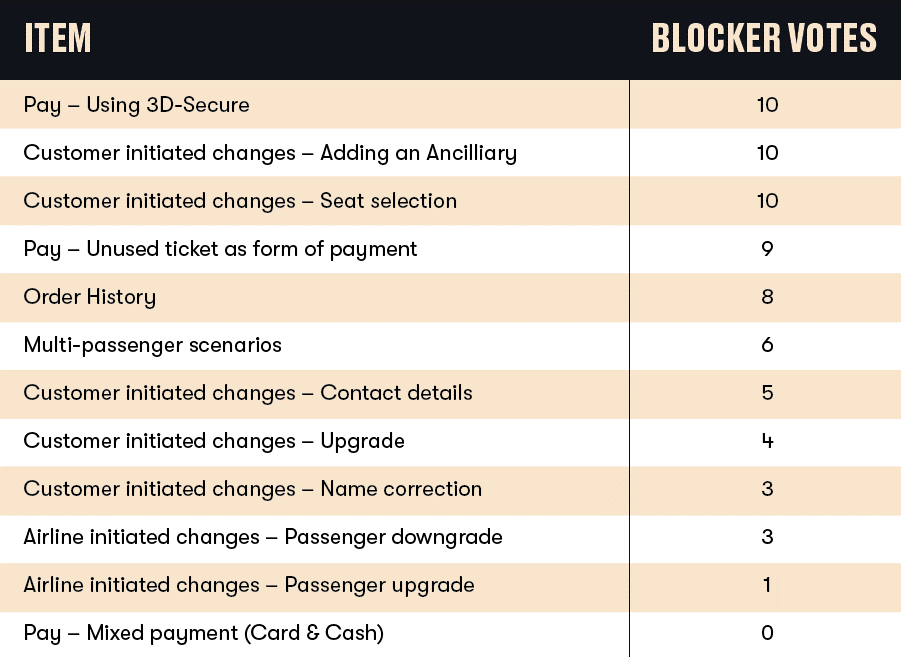 The table below shows the full voting scores by mean average of the rankings (from 1 to 18) of each of the capabilities. Note that lower numbers mean higher priority, so each participant voted 1 for their top priority capability, 2 for second, and so on, down to 18 for lowest priority. 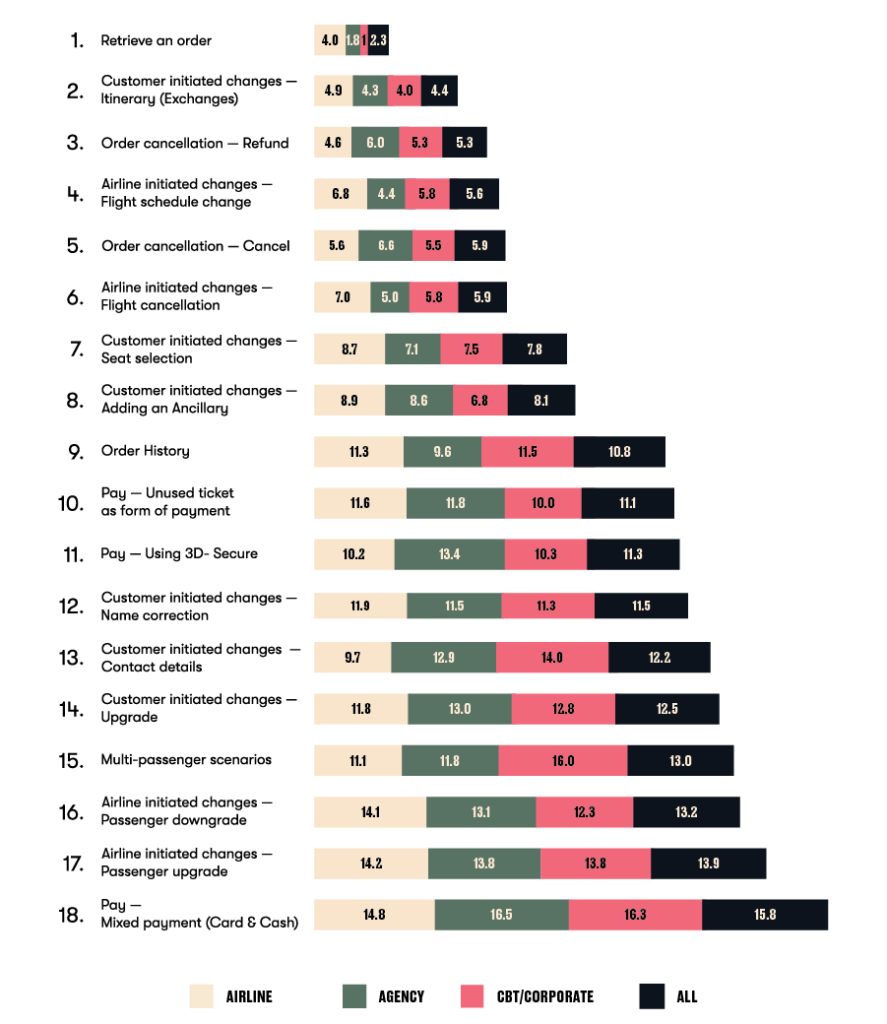 Servicing capability options #1-6 are deemed to be top priority — and this logically aligns with what members consider to be ‘blockers’.

Flight schedule change and flight cancellation are somewhat higher priority for agencies, compared to airlines or corporates, and they rated both order cancellation and refund slightly lower. Given unusually high level of cancellation and schedule change during 2020 in particular — keeping customers informed is critical for agencies. Similarly Order History (item #9) was noticeably more important for agencies than the other groups. Agencies want to continue to engage their customer post booking and for the duration of the trip.

Customer initiated changes (items #7 and #8: seat selection and adding an ancillary) had significantly more diversity in responses, especially from airlines. While these items are generally higher priority to agencies, individual airlines votes varied significantly — with five carriers placing both them in the top 7 or 8, but some others treating them as lowest, or next to, lowest priority. This is largely due to differing product and ancillary strategies in different carriers — some choose to bundle these items into fare families, others prefer to sell as standalone items.

Unused ticket as form of payment (item #10) was low priority for a significant majority of participants, except for two airlines and two agencies who gave it a medium score, and one corporate buyer and one other travel agent who each gave it 4th place. This indicates that there are multiple ways for dealing with the residual credit that resulted from large number of cancellations in 2020 — with some carriers and some markets opting to use extended ticket validity rather than ticket exchanges or ticket as form of payment to handle this.

The next council meeting is slated for July, in the meantime, you can find out more by visiting Travelport’s dedicated NDC hub, visiting www.travelport.com/plus or registering for CAPA Live to hear directly from Travelport.