Air France and unions representing its pilots and those of Transavia France have reached an agreement over the future development of the LCC subsidiary's French arm. This deal with SNPL Air France ALPA and SNPL Transavia needs ratification by the unions' membership, which Air France-KLM expects in mid-Nov-2014.

A key element of the deal is that Transavia France may increase its fleet beyond the current limit of 14 aircraft, which it has reached. Moreover, Transavia France pilots will continue to have Transavia France contracts. However, a crucial concession to the unions is the abandonment of plans to launch Transavia Europe, which was to have started up at bases outside the home markets of France and the Netherlands.

In this first report on the new draft deal to grow Transavia France, we consider the competitive environment and suggest Air France-KLM may one day rue the scrapping of its Transavia Europe plans. Part two will focus on how Transavia will develop alongside Air France's own medium-haul operations.

According to Air France-KLM's own estimates, the strike cost the company EUR320 million to EUR350 million in operating profit. The strike has also had a negative impact on forward bookings into 4Q2014. Together with the effects of what Air France-KLM called an "unfavourable demand trend seen since the early summer", this has led to estimate that its 2014 EBITDA could be adversely affected by as much as EUR500 million.

This suggests that Air France-KLM's previous 2014 EBITDA target of EUR2.2 billion to EUR2.3 billion may now be EUR1.7 billion to EUR1.8 billion, compared with EUR1.9 billion in 2013 and EUR1.4 billion in 2012. Already lagging the profitability of its main European rivals, the strike has effectively set its financial recovery back by a year. This put management under enormous pressure to reach an agreement with the unions.

Growth of Transavia in France is vital to combat LCC competition

However, finding a resolution to the strike was not only important to stem the short term bleeding of the group's finances, but also to address a key strategic issue.

Air France-KLM's medium-haul point to point network has been heavily loss-making for several years. Under the group's new Perform 2020 five year strategic plan, it aims to return this activity to breakeven at the operating profit level by 2017.

The leisure market addressed by Transavia is a big part of this market segment, which has seen strong and growing competition from foreign LCCs. Management needed to reach agreement with unions over the future growth of Transavia France, which has reached the limit of 14 aircraft previously agreed with the pilots.

Superficially, this LCC competition does not look too terrible at first sight. The share of seats taken by low-cost carriers in France is still less than in Europe as a whole.

Through the first eight months of 2014, LCCs have a share of about 28% of seats on international routes compared with about 38% within Europe overall. 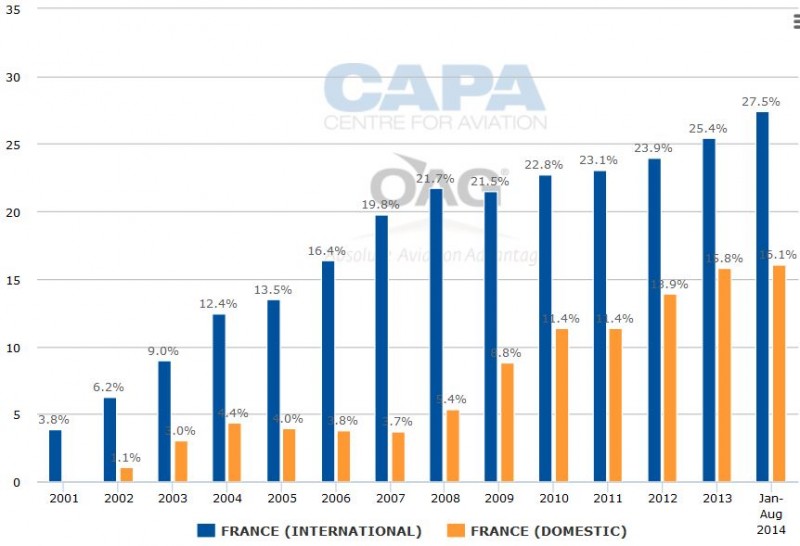 … but not in markets that exclude Paris CDG

However, the picture is a little different in the non-hub market. On routes between France and Europe (including domestic routes within France) excluding Air France's hub at Paris CDG, LCCs other than Transavia have a 40% share of seats in 2014 (43% including Transavia-branded operations), according to OAG data. This is up from 18% in 2004.

Over the same 10-year period, the capacity share of the Air France-KLM Group on these routes has fallen from 49% to 34%.

Over the past decade, LCCs easyJet (16% of seats in 2014), Ryanair (13%) and Vueling (6%) have been the main winners in terms of market share gains on routes between France and Europe that exclude Paris CDG.

The share of seats operated by Air France itself has fallen from 47% in 2004 to 22% in 2014. In 2013 and 2014, some of Air France's market share has been transferred to group companies Transavia and Hop. These subsidiaries, in particular Hop, have helped to stabilise the market share of the Air France-KLM group overall.

Nevertheless, the group's share in the non-CDG France-Europe market has still fallen in 2014 (to 34% from 36% in 2013), while that of rival LCCs has increased once more this year.

Against this background, the further growth of Transavia France, the Paris Orly-based arm of the Transavia brand, is crucial to the group. An Air France-KLM press release of 22-Sep-2014 made this clear: "Management also wishes to reassert that Air France-KLM’s development on the low-cost market in Europe is both strategic and urgent for the Group’s future, given that this market is fast-expanding and our competitors have adopted particularly offensive strategies on the French market."

The agreement that has now been reached between Air France and the two pilot union organisations, SNPL Air France ALPA and SNPL Transavia, plots a path that will allow Transavia France to grow, subject to ratification by the unions' membership. It also contains significant ongoing restrictions, which we will consider below.

The key concession on the part of the unions is that there will not be a single unified pilots' contract to cover all Air France group companies. This had been a key demand by the pilots and was the principal source of disagreement that led to the damaging strike that hit Air France over 14 days in Sep-2014. Pilots flying for the LCC will continue to have Transavia France contracts, with their own operating and remuneration conditions.

In addition, Transavia will continue to operate Boeing 737 aircraft, rather than the A320 operated by Air France and which the pilot unions had demanded be used by the LCC brand.

Air France insisted that conceding to these demands would have killed Transavia France.

Pilots moving to Transavia under voluntary transfers will be paid a compensatory premium of EUR35,000, since their earnings are likely to be lower than at Air France. There will also be a unified seniority list covering both sets of pilots. Presumably, these measures are designed to allow Air France pilots that transfer to Transavia to return to Air France without any detriment.

The key concession on the part of Air France management is that it has abandoned its plans to establish and develop a third arm of the Transavia brand. This was to have been Transavia Europe, a project to establish low-cost operations in bases in Europe outside the Air France-KLM home countries of France and the Netherlands (where Transavia activities already exist).

Air France-KLM CEO Alexandre de Juniac announced the establishment of Transavia Europe in Sep-2014 during the group's investor day presentations. Under the plan announced at that time, the total Transavia fleet would have grown from 44 aircraft this summer to 100 in 2017, with the new pan-European operation enjoying the most rapid growth and Transavia France also benefiting from an increase in size.

…but the prospect of Transavia Europe put pressure on the unions

Mr de Juniac also insisted that, if the French pilot unions did not agree to an increase in the Transavia France fleet beyond its previously agreed limit of 14 aircraft, then he would concentrate the growth in Transavia Europe. As CAPA stated in a Sep-2014 analysis report: "The establishment of the pan-European element of Transavia is not without its challenges, but it does give Air France-KLM a useful 'Plan B' option, always important in any negotiation with unions."

The Transavia Europe plan would have used a new AOC, recruited locally and employed staff on terms much more adapted to the LCC market. It seems that this prospect was less appealing to the French pilot unions, who feared that the presence of such an operation would lead to the undermining of their own terms and conditions, than the expansion of Transavia France.

This raises the question of whether Transavia Europe was ever a genuine plan, or merely a clever negotiating ploy on the part of Air France and Air France-KLM to force the French pilot unions into agreeing to the expansion of Transavia France. Either way, the plan has certainly assisted management in furthering the development of its LCC in France.

Transavia Europe's abandonment has downside too

However, if the plan to create Transavia Europe really was a genuine strategic aim, then its rapid abandonment would seem to signal to unions that they have the power of veto over management's strategic developments. This is an unfortunate precedent.

Moreover, the Transavia Europe plan had strategic merit and its abandonment may make it more difficult for Transavia to compete successfully with other LCCs.

Europe's LCCs can be broadly categorised into three groups. First, there are pan European low-cost carriers, which have sizeable point to point networks operating from/to many countries across Europe. These airlines are low cost, but they also compete on product and service and comprise easyJet, Norwegian and Vueling.

The second category is the ultra low-cost carriers, which are Pegasus, Wizz Air and Ryanair. They also have pan European operations, but their very low costs enable them to be profitable with very low fares, which are their main focus of competitive advantage (although Ryanair is now seeking to add product and service features too).

The third category, which includes Transavia, Jet2.com and Monarch are the leisure LCCs. Smaller in scale, they operate mainly out of one country and focus on leisure routes, particularly in the Mediterranean, with a slightly longer average trip length. 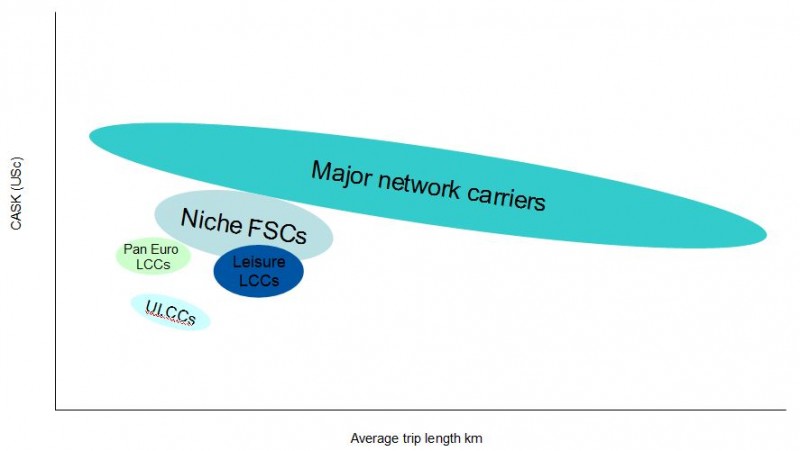 Significant advantages to LCCs having scale across Europe

Most of the biggest and most profitable European LCCs fall into the pan-European and ultra-LCC categories. The airlines in both of these categories have established operations across the continent (particularly Ryanair and easyJet) and have generated significant economies of scale.

In addition, the ultra-LCCs tend to have highly productive labour forces and airport networks that include low-cost secondary airports. The size that comes from having a pan-European network allows purchasing efficiencies with suppliers and buying power with airports.

In addition, a multi-base, multi-country strategy leads to brands that enjoy recognition by passengers at both ends of the routes (since they are not skewed to one country for their originating passengers). Having a presence across a number of countries also allows access to local pools of labour on a more cost efficient basis than is possible for airlines that are primarily based in one country.

It is not purely by coincidence that all but one of the LCCs in the pan-European and ultra-LCC categories were more profitable (as defined by operating margin) in 2013 than the leisure LCCs. The single exception was Norwegian, whose profitability suffered in 2013 as a result of costs associated with the start-up of its long-haul network.

Scrapping Transavia Europe may prove to be a high price

This analysis suggests that developing Transavia on a pan-European basis could have had some significant benefits for the Air France-KLM group. Indeed the group's investor day presentation slides in Sep-2014 announcing the planned launch of Transavia Europe explicitly made reference to the benefits of moving to a more pan-European scale.

This suggests that it saw strategic merit in establishing Transavia Europe and that the plan was more than just a bargaining chip for union negotiations.

When it announced its plan for Transavia Europe, Air France-KLM said that it was targeting a medium term operating margin of above 5% for Transavia overall. This would be a big improvement on its 2013 margin of -2.3%, but would still be lower than the 2013 margins of all other European LCCs apart from the leisure LCCs and Norwegian. Without the advantages of pan-European scale, even this modest target may be challenging.

The abandonment of Transavia Europe looks to have secured for the Air France-KLM group the opportunity to grow Transavia France. However, the price for this is a more limited strategic vision for the LCC brand and this may limit its success in terms of its future profits.

This analysis will be concluded in a second report, which will consider Transavia France's role in the medium-haul point to point network relative to that of Air France.