Tokyo Haneda is poised to regain the title of Asia's largest airport from Beijing Capital. Beijing Capital overtook Tokyo Haneda in passenger traffic in 2009, but Haneda's growth and future expansion from international services will boost its traffic, whereas at Beijing Capital there will be a reduction as some airlines move from it to the new facility, Beijing Daxing.

But rankings and titles have limited implications. Tokyo Haneda will receive approximately 53 new daily international round trips in 2020 in the lead-up to the 2020 Tokyo Olympics.

As with the previous international Haneda expansion, many of Haneda's new flights will be existing flights transferred from Narita. Allocating the slots will be political, domestically and internationally, as Japan shapes its aviation policy considering ANA versus JAL; full service versus low cost; ANA and JAL JV partners versus independent airlines.

Even before those discussions begin, ANA and its partners have received an advantage with planned expansion works that will mean that ANA's domestic Haneda terminal will also handle international flights, allowing same-terminal domestic-international connections.

Tokyo Haneda was Asia's largest airport until 2009, when it was overtaken by Beijing Capital. This was a result of Beijing Capital's organic growth and a traffic downturn at Haneda that started in 2008. Haneda's 2007 traffic record (66.8 million) was not surpassed until 2013 (68.7 million). Haneda has posted growth every year since, making 2017 its fifth year of expansion. 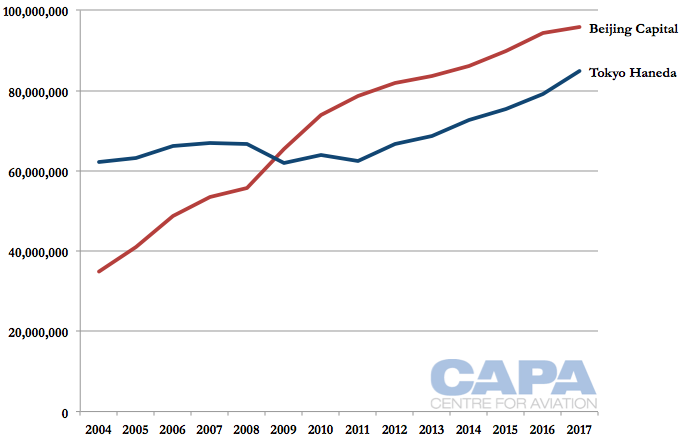 Tokyo Haneda is likely to overtake Beijing Capital in 2020 as Asia's largest airport. Tokyo Haneda could receive approximately 8 million additional passengers in 2020 as a result of an international slot expansion programme (discussed later in the report).

Growth has occurred despite no significant slot increases. Domestically, airlines are gaining higher load factors, while during the year international benefitted from a full-year realisation of daytime US services. International passengers make up approximately 20% of Haneda's total throughput, up from 6% in 2010. 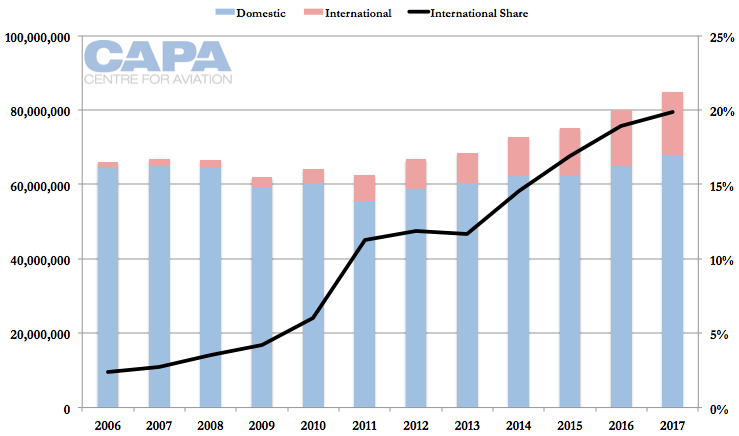 Slots will be increased at Tokyo Haneda in time for the 2020 Olympic Games, and Japan has a goal of 40 million annual visitors in that year.

The slot increase at Haneda has convenient timing: more flights means more noise, and having to redesign some parts of airspace to accommodate additional traffic. This will expose more residents to noise, but it appears that slot expansion can be more easily passed under the banner of supporting the Olympics. 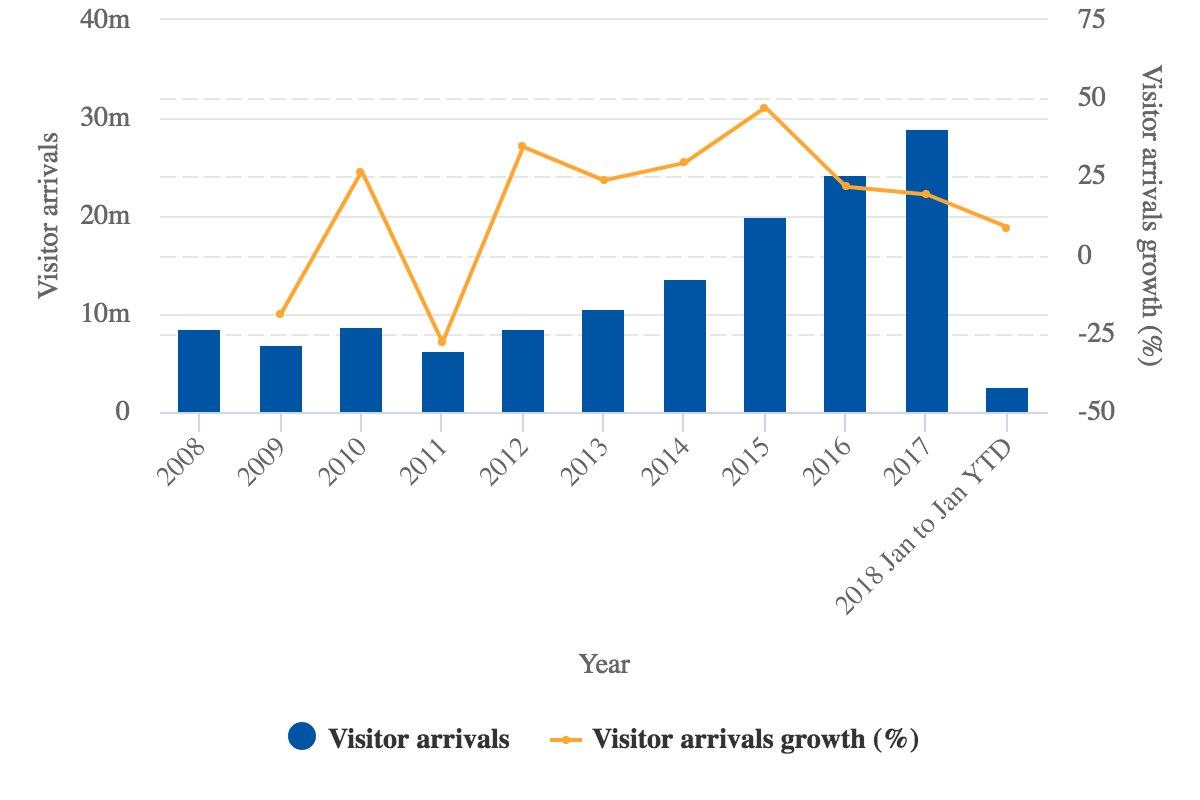 Haneda's slots (total, not slot pairs) will increase by 39,000 per annum, from 447,000 to 486,000. The additional slots will all be for international flights. There are an existing 90,000 available slots for international services (at daytime and night-time hours), so international will have 129,000 slots. Details of the allocation (day/night, airline, etc.) have yet to be announced, but the additional gate space is scheduled to be available from Mar-2020.

Assuming all new slots are utilised with an average of 200 passengers carried per slot, Haneda will gain 7.8 million passengers. The figure is approximate; some slots will go to narrowbody operators (Japan's LCCs are advocating for more Haneda access), while ANA and JAL fly low-density widebodies.

All Haneda international flights operate out of the international terminal, to be renamed terminal three. The facility has limited expansion options, so instead, terminal two will be expanded.

But terminal two is also home to ANA, which has been in good favour with the government since JAL's post-bankruptcy bailout. At terminal two seven gates (about one-third of total) will be able to handle international flights. Two of the gates will be exclusive international gates. The changes and related works will cost an estimated JPY75 billion (USD702 million).

The development gives a strong advantage to ANA, since it will be able to offer same-terminal domestic-international connections. JAL will be unable to do so.

Separately from the terminal two developments, Haneda aims to improve minimum connection times across the airport, which currently lag Narita's.

The benefit will extend both to ANA and its partners. The exact allocation of gates is not yet public, but presumably ANA will try to have as many of its international flights as possible at terminal two, in addition to selected flights of its JV partners. 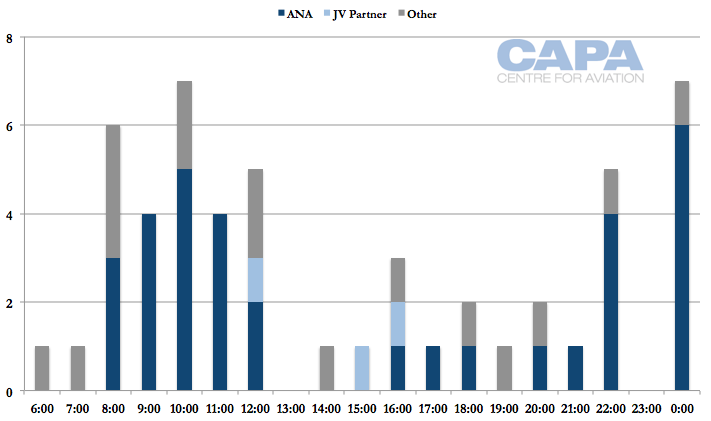 ANA is a member of Star, and flights from Star members who are not in a JV with ANA could be moved to terminal two. ANA's JV partners are Lufthansa Group and United Airlines. Lufthansa is the only member of the Lufthansa Group serving Haneda; Austrian and Swiss use Narita.

This, and much more, could change after allocation of new Haneda slots. The 39,000 additional international slots equates to approximately 53 daily round-trip flights.

A number of airlines are advocating new or expanded Haneda access. Austrian and Swiss could move to Haneda, in addition to Lufthansa and United having more international flights at Haneda. ANA would have its own Haneda international growth, and some airlines could, over time, become important partners to ANA.

Haneda is poised to regain the title of Asia's largest airport, largely because of Beijing Capital splitting its traffic when Beijing Daxing opens.

Yet rankings and titles ultimately have limited implications. Far more of an impact will come from what is meant from the developments.

But ANA and JAL are obliged to manage split international hubs at Narita and Haneda. Although they would prefer to operate from one airport, this is not feasible.

The availability of international slots is significant, but generates a fierce political battle over which countries/markets they should be allocated to. There will be heavy lobbying among Japanese airlines over the way Japan's share of slots should be allocated among local airlines.

The political horse-trading that is sure to occur is unlikely however to deliver an outcome that does serve the best interests of Japan's aviation, in this always political environment.