Tigerair posted a small profit in the three months ending 31-Dec-2014, marking the first time the group was in the black in two years. Tigerair Singapore was roughly break-even after five consecutive quarters of large losses as capacity reductions drove an improvement in yields and load factors.

Tigerair has successfully completed the first phase of its turnaround initiative after closing or selling unprofitable affiliates and reducing capacity in its original market, Singapore. But the group still faces challenging market conditions, including continued overcapacity on some key routes.

Tigerair also still needs to fully implement other components of its new strategy to be profitable on a consistent basis. Partnerships are particularly crucial for Tigerair to complete a turnaround and eventually resume growth.

The Tigerair Group’s consistently poor results since its Jan-2010 initial public offering (IPO) have been driven primarily by unsustainable losses at its affiliates. The main operation in Singapore has been profitable 11 out of the 20 quarters since the group became listed in 4QFY2010 and is in the black on a cumulative basis. Tigerair Australia, Tigerair Philippines and Tigerair Mandala (Indonesia) were never profitable during their times as Tigerair subsidiaries or affiliates.

Tigerair Mandala, which the group launched in 2012 as a joint venture with Indonesian investment firm Saratoga, was shut down in Aug-2014. Tigerair Philippines, which launched in 2012, was sold to Cebu Pacific in early 2014. Tigerair Australia, which launched in 2007, has been sold to Virgin Australia. (The Tigerair Group initially owned 100% of Tigerair Australia before selling 60% to Virgin Australia in 2012 and the remaining 40% in 2014 while Cebu Pacific acquired in 2014 Tigerair’s 40% stake in Tigerair Philippines as well as the 60% stake owned by the carrier's Filipino shareholders.)

A new affiliate, Tigerair Taiwan, launched in Sep-2014. But Tigerair only owns a 10% stake in Tigerair Taiwan (with China Airlines holding the remaining 90%) as part of its new “asset light” strategy of focusing resources on Singapore. Tigerair Taiwan along with Tigerair Australia and Tigerair Philippines continue to use the Tigerair brand, website and distribution channels.

Tigerair Singapore has accounted for nearly all of the group’s revenues and expenses since Tigerair Australia transitioned from a subsidiary to an affiliate in 2012. The performance of the group’s affiliates subsequently were only included in the net results. As its stakes in Tigerair Philippines and Tigerair Australia were sold in 2014 (and as Mandala was shut down) the group also stopped including in the net figures its share of the losses.

The group however still receives modest revenues from its former affiliates and from Tigerair Taiwan under franchise agreements as they continue to use the Tigerair brand. As a result Tigerair Singapore was roughly break-even although as a group there was a small operating profit (SGD4 million) in 3QFY2015.

The break-even result represents the best performance for Tigerair Singapore since 1QFY2014. Tigerair Singapore was in the red every quarter from 2QFY2014 to 2QFY2015, including an operating loss of SGD17 million (USD13 million) in 3QFY2014.

But the more than SGD100 million in losses at Tigerair Singapore from 2QFY2014 through 2QFY2015 can also be partially blamed on the problems at affiliates because those problems forced the group to allocate to Singapore several additional aircraft that were initially intended for expansion at the affiliates.

Tigerair Singapore grew ASKs by 24% in calendar 2013 and by 16% in 1H2014. But monthly ASK growth slowed to the low single digits in calendar 3Q2014 as Tigerair started making capacity and network adjustments. In the last two months of 2014 monthly ASKs were below 2013 levels. 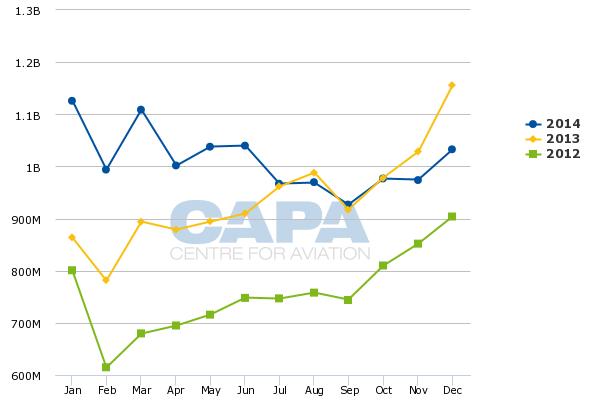 The new more disciplined approach to capacity also drove an improvement in yields. Revenue per RPK or yield was up 5% while fares average fares rose 16%.

Yield had been on a steady decline from 3QFY2013 to 2QFY2015. During this period there were quarter-on-quarter drops in yield seven out of eight times. On a year over year basis there was a yield decline for six consecutive quarters from 1QFY2014 to 2QFY2015.

Load factor also dropped on a quarter over quarter basis for five consecutive quarters, stretching from 3QFY2013 to 4QFY2014. Load factor began improving in 1QFY2015 but initially these gains were at the expense of yield.

The simultaneous improvement in load factor and yield in 3QFY2015 is an indication the storm clouds that have hung over the Singapore market since CY2013 have started to clear. When also factoring in the sharp drop in fuel prices, the CY2015 outlook for Tigerair Singapore seems relatively bright.

But it is still too early to call the turnaround complete. Competition is still relatively intense in the Singapore market. Overcapacity concerns have eased somewhat but some routes continue to experience aggressive competition.

Most of Tigerair’s main competitors have been exercising similar capacity discipline in recent months, with Jetstar Asia also suspending expansion and AirAsia cutting capacity in the key Singapore-Malaysia and Singapore-Indonesia markets. But some LCC competitors, including smaller or newer players in the Singapore market, could be tempted to again pursue aggressive expansion in 2015. Tigerair could potentially be at a competitive disadvantage to some of these competitors because it is 35% hedged over the next month 15 months (Jan-2015 to Mar-2016) at an average fuel price of USD111.68 per barrel.

The fiscal third or December quarter historically also has been Tigerair’s strongest quarter. It is no coincidence that the last three times the group has been profitable have all occurred in the fiscal third quarter. The small profit from 3QFY2015 is hardly a guarantee that Tigerair Singapore will be able to stay in the black over the next few quarters.

A return to historical yield and load factor figures could become feasible despite the highly competitive environment as Tigerair starts to rely more on partnerships. Tigerair began offering connections with Singapore Airlines (SIA) long-haul LCC subsidiary Scoot two years ago and added Cebu Pacific and SpiceJet as partners one year ago. But transit passenger numbers, including connections between Tigerair flights, remain very low.

Tigerair has been working more closely with Scoot since their application for anti-trust immunity was approved by Singapore competition authorities in Aug-2014. SIA's lifting its stake in Tigerair in Dec-2014 from about 40% to 56%, resulting in Tigerair becoming an SIA Group subsidiary, further increased the impetus for closer ties.

Tigerair-Scoot connection traffic has already doubled but on an extremely low base. It is still nowhere near the transfer level that AirAsia achieves with long-haul sister carrier AirAsia X in neighouring Kuala Lumpur.

Tigerair is expected over the next few months to start retiming some of its flights to improve connections with Scoot. The two carriers are also aiming to implement by the end of 2015 seamless booking across their websites. Tigerair’s reservation system is being upgraded to support the closer cooperation. (Tigerair and Scoot both use Navitarie’s New Skies platform but Scoot has been using a newer version with additional features.)

The two carriers should also start benefiting from a new joint venture on the Singapore-Bangkok and Singapore-Hong Kong routes which was implemented in early Jan-2015. Tigerair CEO Lee Lik Hsin said during a 26-Jan-2015 results briefing that the carrier continues to discuss with Scoot potentially adding the third overlapping route to the joint venture, Singapore-Taipei.

Tigerair's future success will rely on deepening its range of partnerships

Tigerair is also now seeking approval from Singapore competition authorities to implement a joint venture in the Singapore-Philippines market with Cebu Pacific. But Mr Lee said the focus is now on increasing cooperation with Scoot and Singapore Airlines itself rather than seek more new partners outside the group. He added the partnership with SpiceJet is currently under review.

As CAPA has previously outlined, the volume of connecting passengers between Tigerair and India's SpiceJet has been extremely low since the partnership was implemented in Jan-2014 because Tigerair flights are not well timed to connect with SpiceJet domestic connections. The partnership has so far been limited to Hyderabad, where Tigerair only has flights landing in the evening – too late for same day domestic connections.

For several months Tigerair has been looking at retiming some of its Hyderabad flights and expanding the partnership with SpiceJet, which does not serve Singapore, to other common gateways such as Bangalore. But so far no changes or additions have been pursued, making the partnership virtually useless.

Increased cooperation with SpiceJet is unlikely in the short-term as SpiceJet needs to focus on its own restructuring. But Tigerair should continue to pursue the idea of providing offline access in India, a key market that currently accounts for 11% of its total seat capacity.

A partnership with IndiGo, India’s largest LCC, could emerge as an intriguing option. Tigerair is now in the process of subleasing 12 of its surplus A320s to IndiGo, a deal which could open the door to a potential partnership.

Tigerair also now has a very small and little known partnership with Golden Myanmar, which ceased operating the Yangon-Singapore route in late 2014 and is instead now selling tickets on Tigerair flights between Yangon and Singapore. Tigerair could potentially use Golden Myanmar to provide offline access to additional destinations in Myanmar beyond Yangon.

A partnership with Thailand’s Nok would also be a logical addition given Nok’s new tie up with Scoot. Nok would give Tigerair access to additional destinations in Thailand, which is currently Tigerair’s largest market, accounting for 20% of its total seat capacity. 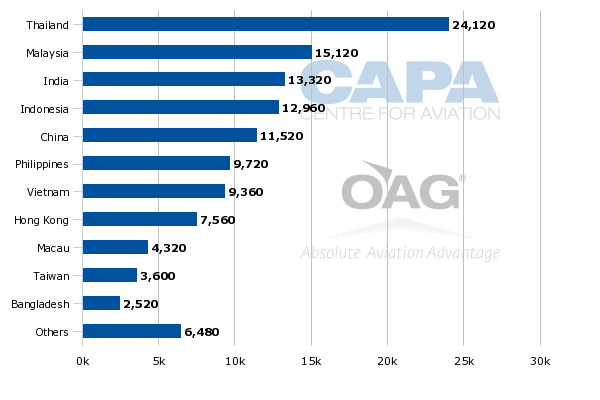 While Scoot and Cebu Pacific provides the biggest opportunities Tigerair should be building up a wider portfolio of partners. Partnerships are still evolving but should be a crucial component of Tigerair’s new long-term strategy.

Partnerships should aid continued efforts to boost yield and load factor while also unlocking new opportunities for growth. Mr Lee said Tigerair is not planning further rationalisation of the network and is looking at opportunities to add capacity on existing routes. It would be logical for Tigerair to focus such capacity increases on markets that see a high volume of connecting passengers with Scoot and other partners.

While Tigerair Singapore is not planning to add aircraft for at least the short to medium term there should be room to add some capacity simply by increasing aircraft utilisation levels. Tigerair’s average aircraft utilisation rate in 3QFY2015 was 12hrs per day, which is up slightly from 1HFY2014 levels but still below FY2013 levels. Tigerair Singapore currently operates a fleet of 24 A320s, down from a peak of 27 aircraft in early FY2015.

The aircraft figures in the chart above exclude aircraft that were grounded following the sale of Tigerair Philippines and shutdown of Tigerair Mandala. These two affiliates operated 14 aircraft combined. Most of these aircraft were initially grounded. IndiGo subsequently agreed to sublease 12 of the aircraft for three to four years with the subleases commencing between Oct-2014 to Apr-2015. Tigerair Taiwan also has subleased one A320.

The IndiGo aircraft were subleased at a loss, a still-sensible move as grounding the aircraft outright was a much more costly and unsustainable option. Tigerair took a SGD93 million (USD72 million) one-time charge in 2QFY2015 to reflect this loss. Accruing the loss gradually over the next four years would perhaps have been a fairer indication of Tigerair’s financial position but would have significantly impacted the group’s bottom line every quarter, making it nearly impossible to return to profitability.

Tigerair begins 2015 on a much more solid financial footing, having resolved the surplus aircraft issue, closed or sold its unprofitable affiliates and raised SGD227 million (USD175 million) in fresh capital through a recently completed rights issue. The storm clouds of the past couple of years have finally cleared up and its partnership strategy is under way.

But the turnaround is far from complete. Tigerair still has to a long road of challenges to navigate as it continues to implement its new more conservative Singapore-focused strategy under the wings of SIA.